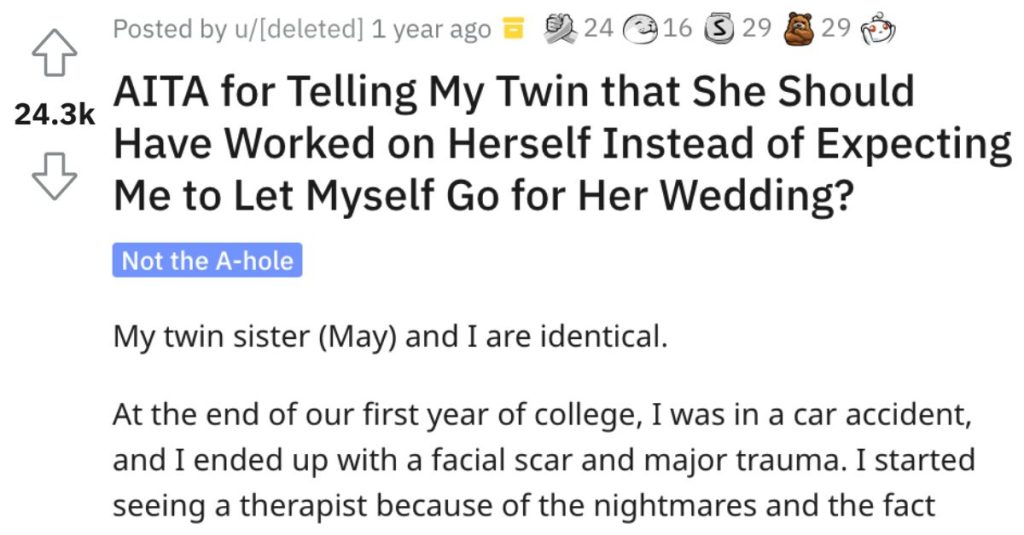 She Told Her Twin Sister She Should’ve Tried to Look Better for Her Wedding. Did She Go Too Far?

To each their own, right…?

That saying can be applied to a lot of things in life and one of them is how you choose to look on your own wedding day.

But this story has a twist that involves twin sisters getting into some family drama before one of their weddings.

AITA for Telling My Twin that She Should Have Worked on Herself Instead of Expecting Me to Let Myself Go for Her Wedding?

“My twin sister (May) and I are identical.

At the end of our first year of college, I was in a car accident, and I ended up with a facial scar and major trauma. I started seeing a therapist because of the nightmares and the fact that I was panicking any time I got into a car.

That lead to me realizing there were some deeper issues, which we worked on. As part of that work, I got a physical, started working with a dietician to fix my diet and the smorgasbord of vitamin deficiencies it caused. I started working out (strength training 3 days and sprints or HIIT on 3) with our older sis.

By the end of our first year of college, we had each gained about 30 lbs. By the end of the next year, I had lost half of it, but I was smaller at 134 lbs. than my previous 120 because of the muscle mass. And that’s been my size for the past half decade.

I found a new beautician, and she gave me long layers (to make my natural curls be curls instead of waves of frizz) I always wanted but that my old one said would look bad and refused. I stopped bleaching it and let it go its natural dark blonde/light brown. I stopped spray tanning. Again, that’s been my look for the past five years.

I live in a rural area, and the internet isn’t great. Things like facetime just aren’t options, and I can’t post a lot of pics on social media b/c of it. This is relevant because a big issue is that May didn’t see me over the quarantine.

We talked on the phone a couple times a week, but it mostly revolved around her wedding planning (she got engaged before the Rona put us on lockdown). I wasn’t her MoH, so mostly I was being told decisions, not involved in the process. When it came to the bridesmaids’ dresses, May sent our sister, SIL, and me a link and told us to get it in our size.

Same with hair and makeup, but we had to arrange for a beautician because May’s wouldn’t do more than four, and she wanted her friends at the appointment with her.

Except she didn’t do a bachelorette party with us (she did with her friends) or rehearsal dinner, so May didn’t see any of us until the start of the wedding.

She made several snide remarks before throwing a d**nk temper tantrum at the reception, basically accusing the 3 of us, but me esp. of trying to upstage her. I don’t have that excuse b/c I was a DD so sober, but I (quite famously) have a low tolerance for angry or crying d**nks. I told her “If you’re so insecure, you should’ve got off your a** instead of expecting us to lay on ours to make yours look better.” It only got worse.

Our family is on my side b/c I didn’t start it or do anything, but his family and her friends are giving me s**t. So, AITA?”

This reader said it sounds like her sister is envious of her. 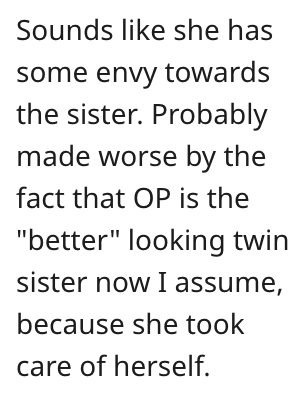 And another individual said she’s NTA and that the fact that the groom’s family took her side says a lot. 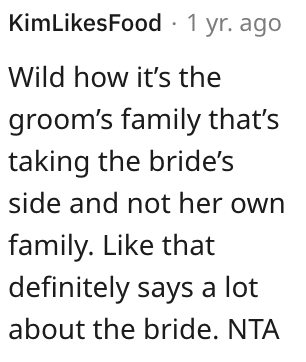 And this reader said she’s NTA and that her sister sounds selfish. 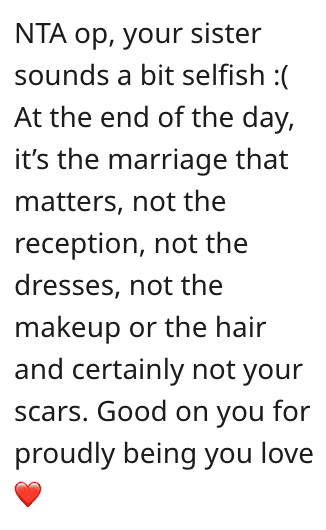