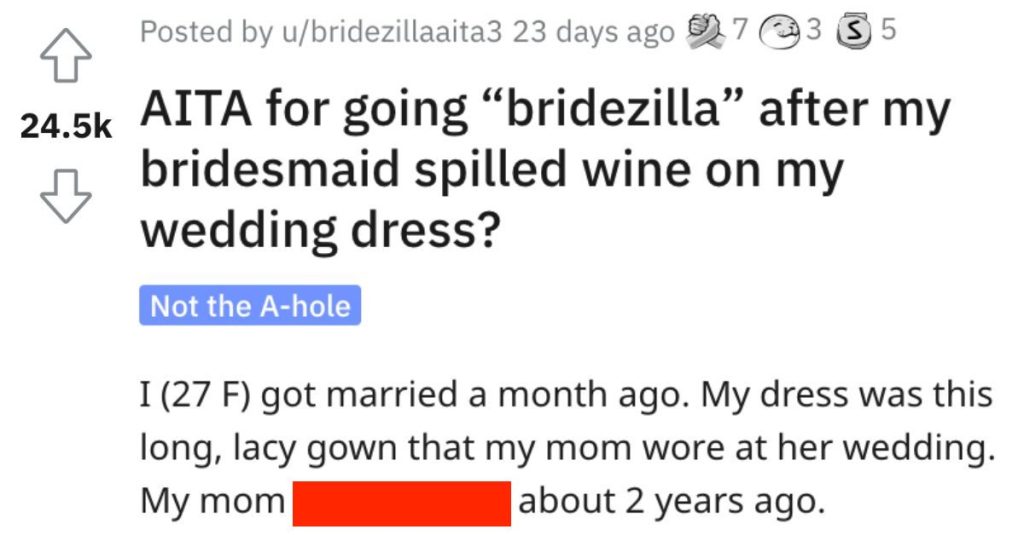 Here we go with another Bridezilla story from the “Am I the A**hole?” page on Reddit!

And you know it’s bound to be filled with drama and intrigue!

Are you ready to see what went down?

Go ahead and jump in!

AITA for going “bridezilla” after my bridesmaid spilled wine on my wedding dress?

“I (27 F) got married a month ago. My dress was this long, lacy gown that my mom wore at her wedding. My mom passed away about 2 years ago.

Because the dress was so important to me, I had a big plan to keep it safe from any damages. I would only wear the dress at the wedding itself, and I would switch to a more casual dress for the reception. When I was wearing the dress, I wouldn’t eat or drink anything except water, and I would stay inside at all times.

I promise I’m not usually this crazy about cleanliness, but this was my mom’s dress, and the thought of it being damaged broke my heart. But I also knew I wanted to wear it when I got married to have a piece of her with me. She adored this dress and always dreamed I would wear it.

My bridesmaids knew very well about my particularities with the dress. I had a room above the venue where I was getting ready. My dress was hanging in a safe place in the room.

On the day of the wedding, I went down to check on something for the wedding, leaving my bridesmaids in the room. Here’s what happened, as they told it to me:

They opened a bottle of Pinot Noir (my favorite) as a celebration. They poured themselves glasses and began to walk around checking out the room. One of my bridesmaids, “Anna,” (27 F) wanted to get a closer look at my dress. She got really close to it, and she started touching the lace. Somehow, her hand holding the wine glass slipped, and wine spilled all over the bottom of the dress.

When I came upstairs, they told me what happened, and I started sobbing. My maid of honor called several professional cleaners, and they said there was no way they could get the dress in before the wedding. They told us ways to save the dress until we could get it into them, so my MOH started doing that.

After that call, I became extremely angry. I asked “Anna” what the hell she was doing holding red wine so close to my dress when she knew how careful I was being. She dismissed it and said it wasn’t such a big deal because I was planning to wear the dress, so it could have gotten damaged that way too.

I couldn’t believe she said that. I called her thoughtless and careless and stupid. I told her that she was no longer part of the wedding and that I wanted her to leave. She left, and neither of us have reached out to the other since.

I got married in the dress I had planned to wear for the reception, and I was heartbroken not to be wearing my mom’s dress. After the wedding, my bridesmaids joked that I was a bridezilla for kicking “Anna” out after she made a “honest mistake.”

I absolutely don’t think I’m the AH or a bridezilla because Anna’s reaction was so horrible and insincere. But I wanted to get the story off my chest and ask some people who might be more impartial, AITA?”

One person said she’s NTA and asked why anyone would have a glass of wine next to a wedding dress. 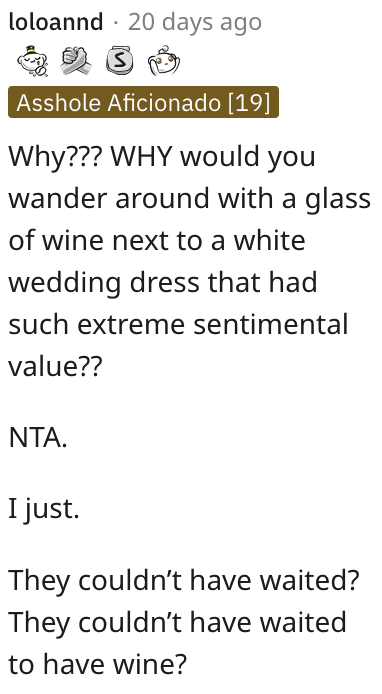 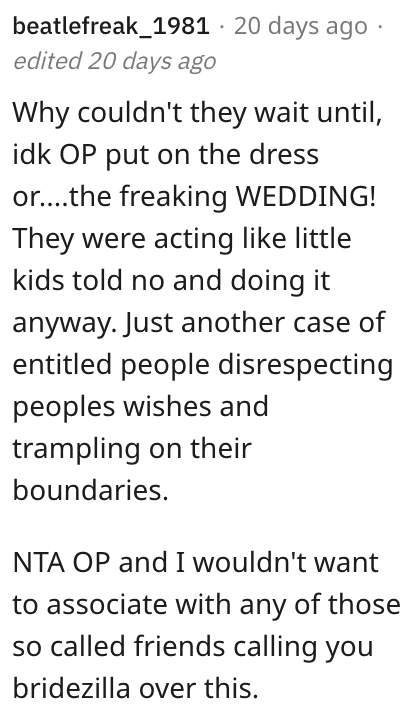 This individual added that ALL of the bridesmaids sound pretty awful. 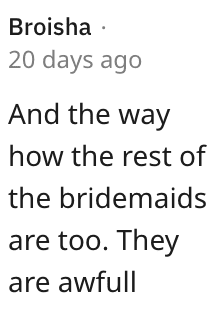