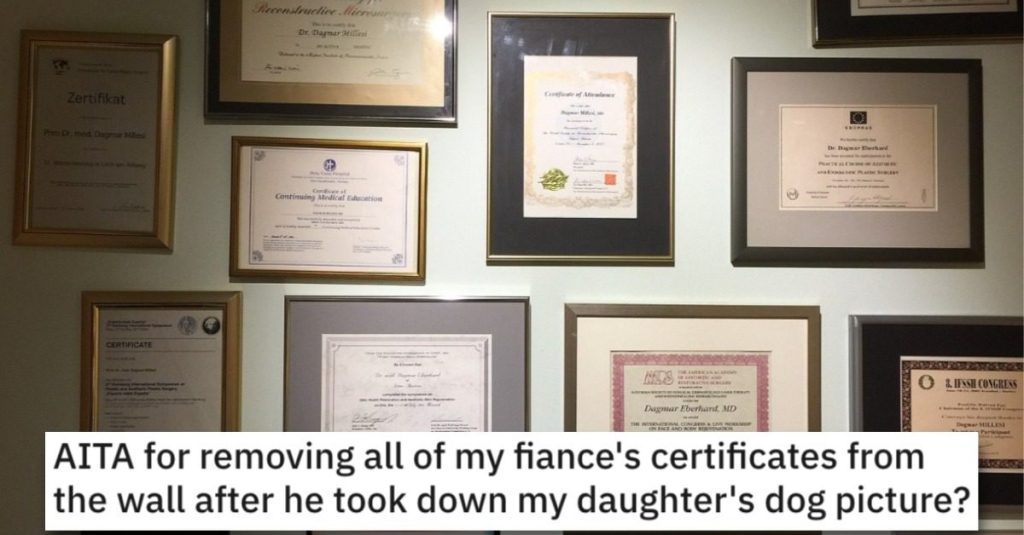 She Took Down All of Her Fiancée’s Certificates From the Wall. Was She Wrong?

And a woman who got pretty upset with her fiancée decided to exact a little revenge on him.

But did she take things too far?

Read on and YOU decide if she acted like an a**hole or not.

AITA for removing all of my fiancee’s certificates from the wall after he took down my daughter’s dog picture?

I own the house we currently live in but after he moved in he started helping out with the mortgage payment. I have a daughter [Ruby, F12, she adores animals (she had about 7 pets so far in her life). Unfortunately, her dog Tic passed away. He was her closest friend and favorite pet. It was devastating for me as well because he was so precious.

As a way to honor him, I’ve printed a middle sized picture of him (Ruby’s favorite) and put it in a frame and hanged the frame in the living room wall. Ruby was so happy with it especially since she gets to see him smiling at her when she walks in, It gives her comfort.

My fiance saw it and got upset. He commented on how strange it was to have the dog’s picture up on the wall and how much of distraction it brings. I felt puzzled because we have all kinds of pictures that were hanging on that wall. He suggested we remove it but I ignored him. One day, I got home and saw that he’s taken it down. Ruby was in her room crying holding the picture.

I asked what happened and she told me that my fiance took the picture off and told her she’s not allowed to have it hung up there, also told her to keep it in her room if she didn’t want to lose it “for good”. I was shocked. I rushed out and immediately started taking down all the certificates he had on that wall. His doctorate , master’s and bachelor’s degrees. And about 4-5 other certificates as well.

All of them I took down and put in the bedroom. He discovered what I did and snapped at me and said that it’s his house as well and I should respect his input. In my defense, I told him that since my daughter has to keep it in her room then he too has to keep his certificates in his room according to his logicHe yelled at me demanding that I stopped nagging him and acting childishly and spitefully.

He wanted to put them back up but I refused and said that if he does that then Tic’s picture will be put back up as well. He yelled about how I disrespected him and his achievements and treated them as trash, and then stormed out.

He’s been giving both me and Ruby the cold shoulder for days now saying he out speak to neither of us til we apologize and put those certificates back up on the wall ourselves.”

One reader said she’s NTA and that it sounds like this guy wants a dictatorship. 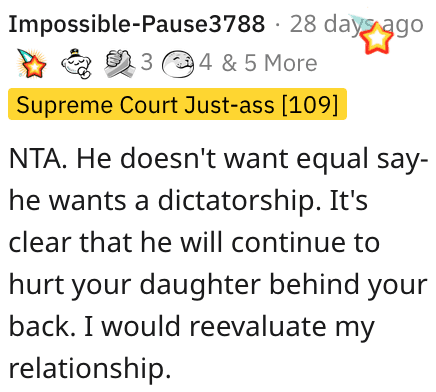 And this Reddit user said she needs to take a hard look at what life will be like with this guy. 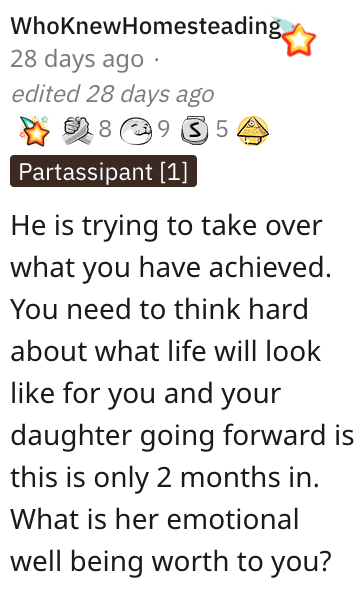 Another individual said she needs to get rid of this guy ASAP. 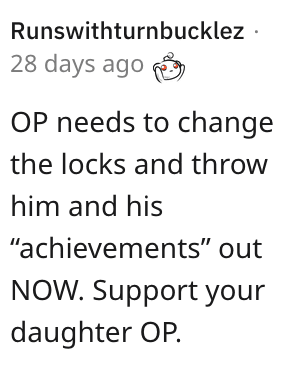