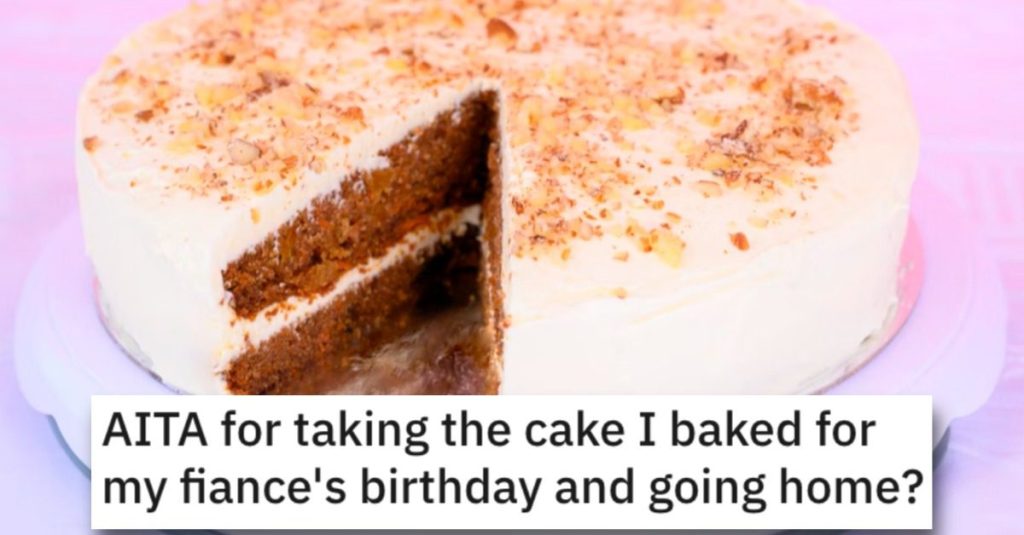 She Took the Cake She Baked for Her Fiancée’s Birthday and Left. Was She Wrong?

I’ve heard numerous stories lately about people getting mad and walking out with food they made and brought to gatherings.

I have yet to do this, but it’s definitely on my list…

Anyway, check out this story and see if you think this woman was a jerk for how she acted at her fiancée’s birthday shindig.

AITA for taking the cake I baked for my fiancee’s birthday and going home?

“Me f25 and fiance m31 ‘Ben”s mom don’t have the best relationship.

I try my best to be polite around her but she’s the type that’d have high standards/expectations of whoever dates her son’s (she has 3). She’s commented on my hair and body several times and at some point suggested “cosmetic” surgeries for the future. This upsets me but Ben tells me this is who she is and I need to learn to have a thick skin since often times, she doesn’t really mean to be malicious.

Anyways, I’m known for baking cakes and sweets. Ben eats what I make but whenever I bring something to his family to try they find every excuse in the world not to eat it. I’m OK with that and stopped doing it.

For Ben’s 31st birthday, his mom wanted to host the party. I decided to bake him his birthday cake and he was thrilled with it. I went grocery shopping, took time off work and put so much effort into making it how he likes it. I took it with me to his mom’s house and to my surprise when I walked in I saw a large birthday cake sitting at the dinning table.

I turned around and made my way to the door. His mom remained standing but Ben followed me asking where I was going. I told him that he didn’t need my cake and by extention me since my efforts were so easily dismissed and disrespected. He said i was overreacting and that his mom paid so much for that cake and it was only fair that he accept it.

He begged me to get back inside and do him this favor by basically just go with the flow but I decided to go home. He got mad and started saying I was being unreasonable and stirring drama over nothing.

I went home and he didn’t get back til 11 PM. He was so upset he said he and his family didn’t appreciate the childish behavior I displayed and ruining his party and disrespecting his mom like that. Said I turned this into a huge deal and should’ve acted more maturelly instead of walking out with the cake.

AITA for taking the cake and walking out?”

And here’s what people had to say on Reddit.

One person said she’s NTA and she needs to get away from this guy. 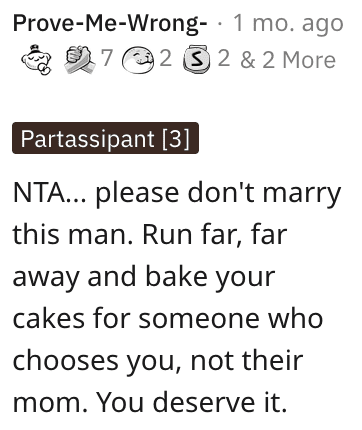 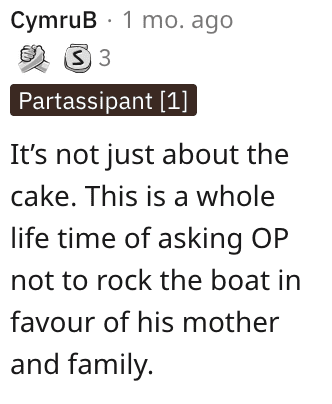 Another individual said she’s NTA and that Ben is devoted to his mom first and foremost. 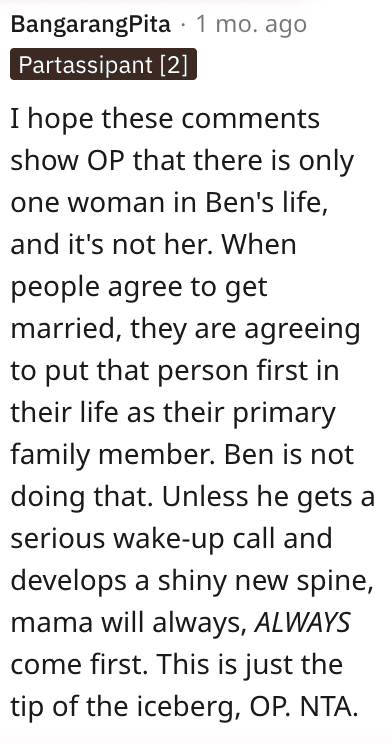