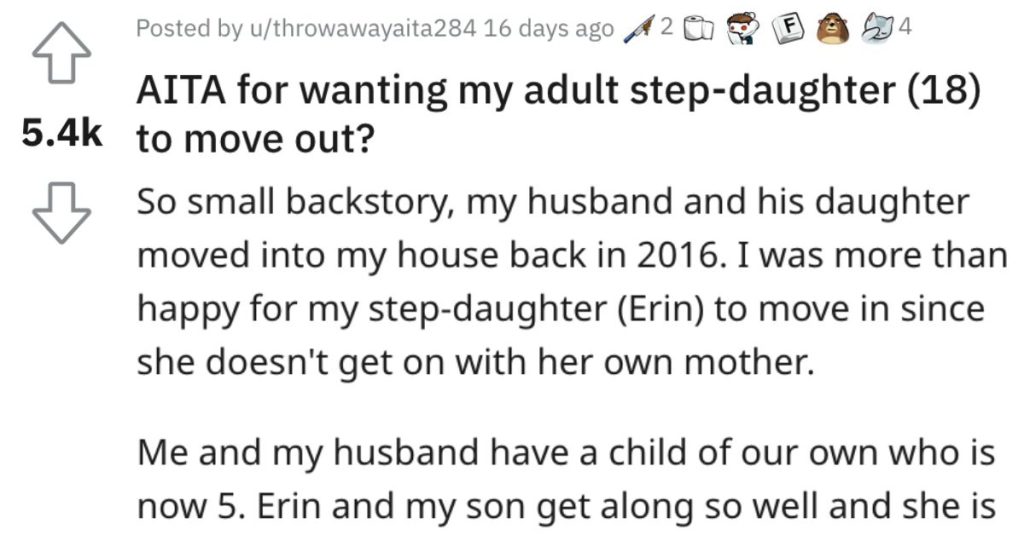 She Wants Her 18-Year-Old Stepdaughter to Move Out. Is She Wrong?

Uh oh…this one could get nasty, my friends.

A woman wants to know if she’s acting like an a**hole for wanting her 18-year-old stepdaughter to hit the road.

Hmmm….let’s see what she has to say before we make up our minds, shall we?

AITA for wanting my adult stepdaughter (18) to move out?

“So small backstory, my husband and his daughter moved into my house back in 2016. I was more than happy for my step-daughter (Erin) to move in since she doesn’t get on with her own mother.

Me and my husband have a child of our own who is now 5. Erin and my son get along so well and she is amazing with him, but sometimes I get a little jealous about the bond they have.

My son will only want to be hugged by her or spend his time with, he even stopped wanting me to read him a story at night and says he likes the way Erin does it better. I admit this makes me jealous but it is not the reason I want her out like my husband keeps thinking is the reason.

We recently found we’re having another child and since our house only has 3 bedrooms there just won’t be enough room. I want to turn Erin’s room into a nursery room.

Since it is my house, I thought my husband would understand that I want my room back as I was nice enough to let her stay here for 6 years. She’s 18 now and legally an adult so I don’t feel any guilt about asking her to leave. Her college doesn’t have accomodation so she lives here while at college so I understand it would be difficult for her to find a place to stay. She could even move back in with her own mother while she looks for a place.

My husband is mad at my decision and is calling me an AH and saying if she goes then he goes too. I don’t want to lose him too but I feel like this is my decision, not his. I’ve not told Erin about this yet but planning to soon so I can get on with decorating before I physically can’t. I’m worried she’ll think I’m an AH too since I still want a relationship with her.

So please help me, AITA?”

And here’s how Reddit users reacted to what happened.

One person said she’s an a**hole, no doubt about it. 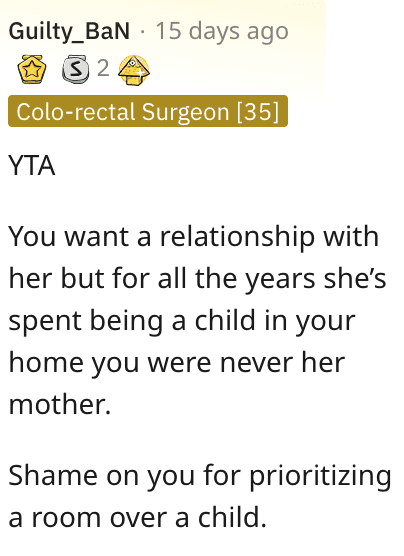 And another reader said it sounds like she has no self-awareness. 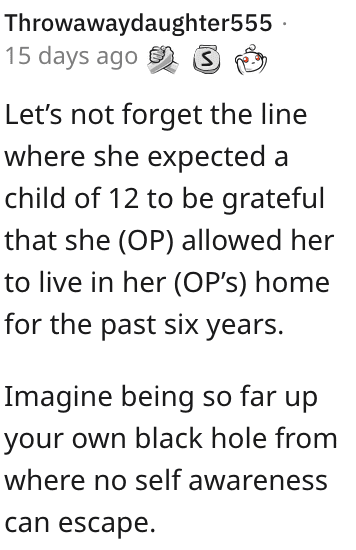 And this individual called her a major a**hole. 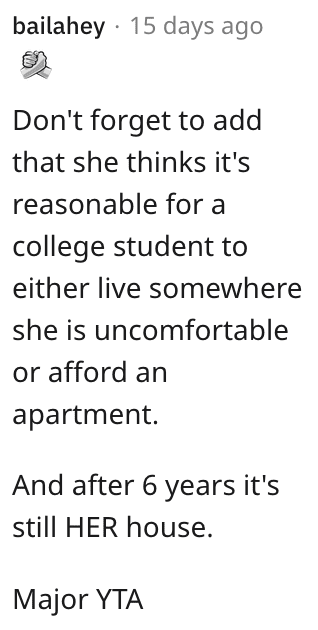