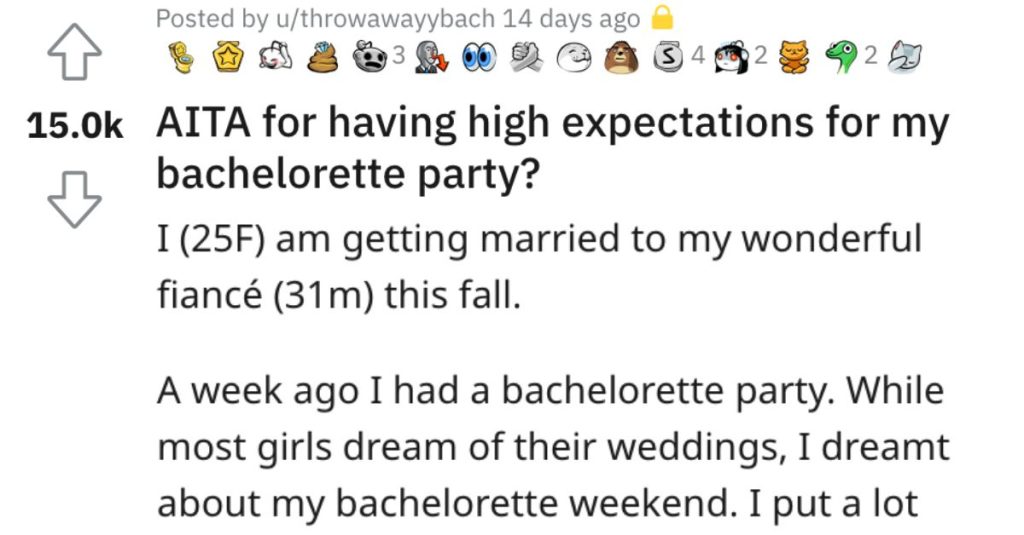 You only get to do your bachelorette party once…well, hopefully only once…

And we all know that everyone is different so each one of them is going to expect different things when it comes to their big night.

But did this woman act like an a**hole for what she expected for her evening out?

AITA for having high expectations for my bachelorette party?

A week ago I had a bachelorette party. While most girls dream of their weddings, I dreamt about my bachelorette weekend. I put a lot of planning into this weekend, made a lot of phone calls, reservations, everything basically.

For Thursday night – Sunday morning me and 25 of my closest girlfriends rented a house. From the start it was a disaster. I had told my girls to get to the house early on Thursday so they could decorate and set up before I got there. Well I got to the house at 3 and they weren’t done decorating so that bummed me out because I wanted that “WOW!” moment when I came in and saw the set up. I felt robbed but we still had a decent first night.

FrIday I woke everyone up at 7am to make breakfast and get ready because we had a packed day – vineyards, boat, lunch, happy hour drinks, then dinner and the clubs. I was getting shaded on all afternoon because people said they were being rushed from place to place and had to carry changes of clothes all day but we only had limited time in this city and I wanted to make the most of it.

Saturday was worse. We had brunch at 9am and no one was awake in time so it only ended up being me and a few loyal bridesmaids. We went shopping after for a few hours and when we got back to the house no one was even apologetic even though I was close to tears all day.

The last straw for me was later that night when we were going to dinner and nobody was wearing the matching shirts we got for the weekend. People wanted to wear their own stuff but that’s not what we agreed on even though my MOH notified everyone.

At that point I said f**k it this weekend was ruined and locked myself in my room to cry. It was even worse when I came out a few hours later and half the girls had gone out anyway (without me, AKA the actual bride).

I ended up driving home early on Sunday and left the house a mess for the girls to pick up because I was so upset. Now it’s been almost a week, no one has really texted me except some bridesmaids and MOH.

I know I sound bridezilla-ish. But these are supposed to be my friends and we were supposed to celebrate me all weekend and I felt neglected and I’m just really upset. I understand these expectations may seem like a lot but i made my expectations clear to the group and they just let me down so bad.

This reader said she’s an a**hole and she sounds controlling. 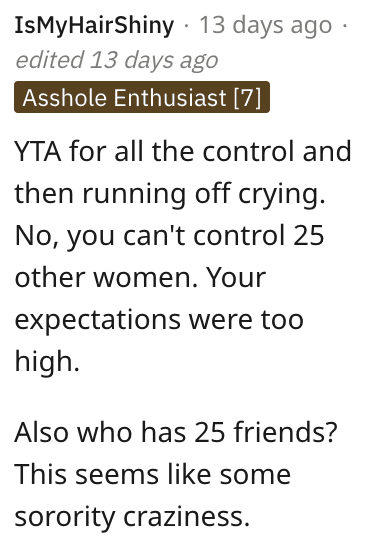 And this individual agreed and said she needs a better attitude. 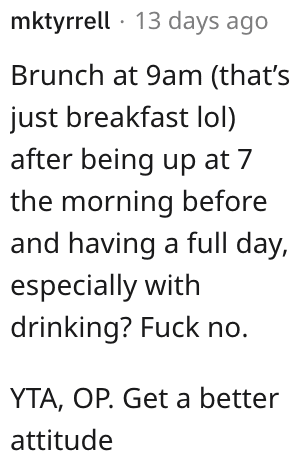 This reader said she needs to loosen her grip or some people probably won’t show up to her wedding.