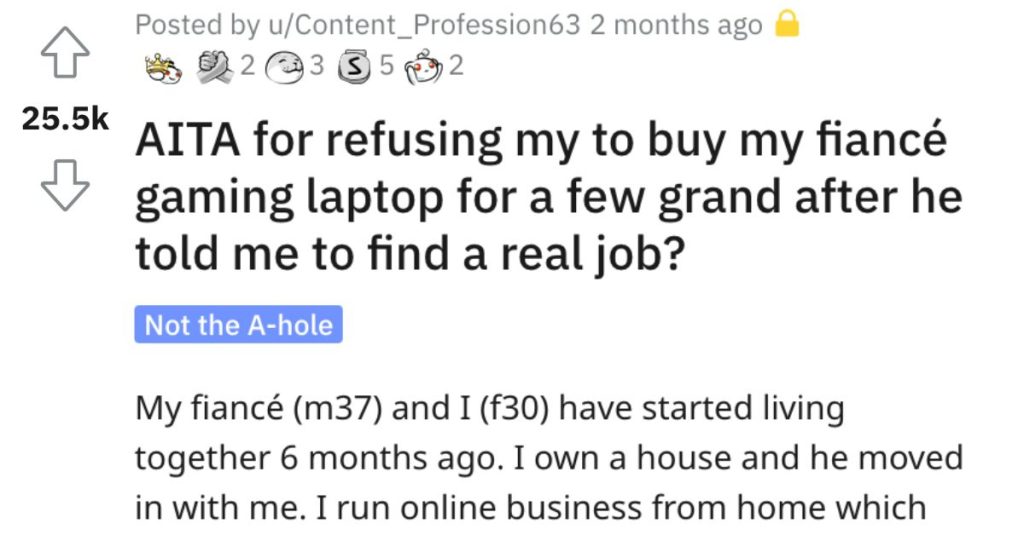 She Won’t Buy Her Fiancée a Gaming Laptop After What He Said About Her Job. Is She Wrong?

The guy you’re about to meet in this story sounds like a real gem!

Actually, you know what…?

I take that back…

But check out this story for yourself and let us know what you think.

AITA for refusing my to buy my fiancé gaming laptop for a few grand after he told me to find a real job?

“My fiancé (m37) and I (f30) have started living together 6 months ago. I own a house and he moved in with me. I run online business from home which allows me to live rather comfortably.

A month after moving in, he quit his job saying how much he h**ed it and that he’s going to try and do twitch streaming for a living. Im all for following your passion so I was supportive although surprised at the turn of events. I am in financial position to support us both but it felt off.

Anyway, nothing happened with his twitch channel. Sure, he’s gaming all day but hasn’t bothered to even try and create an account, he just games for pleasure. It’s been 7 months. I’ve had conversations with him suggesting he finds work but he keeps telling me that I’m unsupportive and he needs time.

He wanted us to buy a bigger house together but I said that I’m fine with my current one and that since he doesn’t have a job, I don’t want to get mortgage and be left with paying everything and he told me that if I found a real job maybe I wouldn’t have financial problems. We had a massive argument that night. Now, he’s been hinting at needing new gaming laptop which costs a few grand and I’ve been ignoring it so he asked outright for me to buy it for his birthday.

I told him no that my fake job doesn’t cover new laptops and he got really p**sed at me, telling me I’m selfish and am ruining his career. Granted, I can afford it to buy it but he really hurt me saying my business is not a real job despite me working my a** off.

AITA for not buying him new laptop?”

This reader brought up a good point: what does this guy bring to the table? 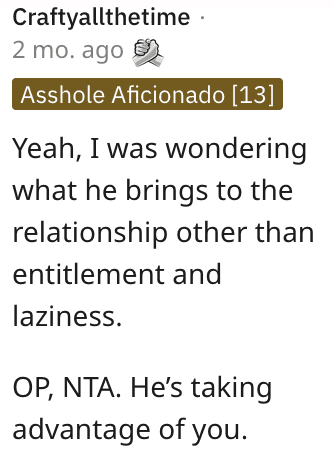 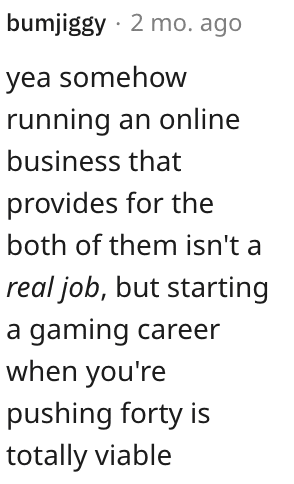 And another reader said she’s NTA and that she needs to get rid of this loser.