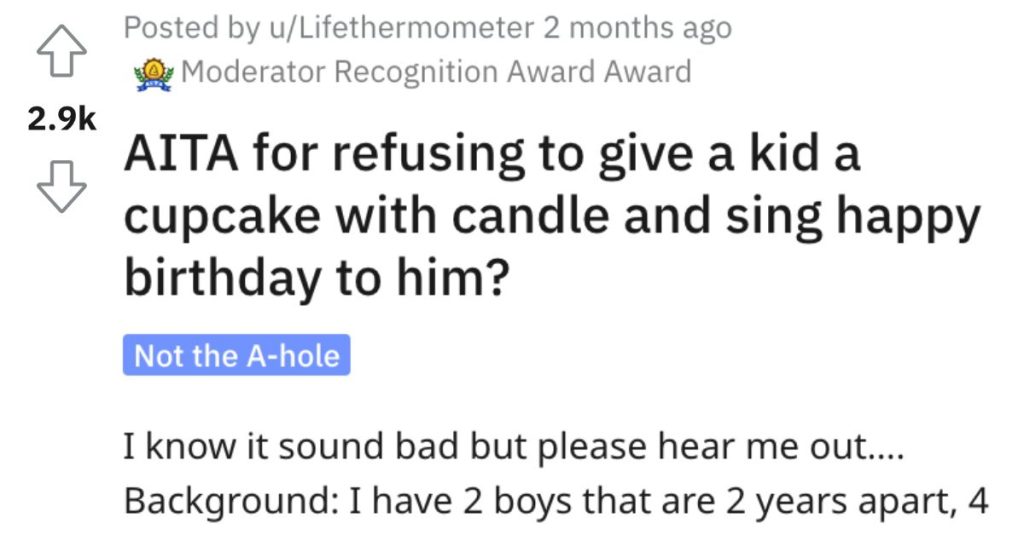 What would have to be going on for you to refuse to give a kid a cupcake with a candle in it AND refuse to sing “Happy Birthday” to them?

That’s a tricky one, don’t you think?

AITA for refusing to give a kid a cupcake with candle and sing happy birthday to him?

“I know it sound bad but please hear me out….

Background: I have 2 boys that are 2 years apart, 4 and 6. The 6yo’s bday party was last weekend, the 4yo (well, he is turning 4) will have his bday party in a couple of weeks. I have always had a shared party since they bdays are so close, but older brother wanted a party just for him.

Ok the story, we invited few family members and some friends, nothing to big, there was a total of 12 kids ranging from baby to a 8yo. We all had a good time everyone was happy. 10 seconds after we sang happy birthday and my son blew his candles, a ‘friend’(she is my husband’s friend’s wife) asked for a cupcake and a candle and proceed to say that now we are singing for her almost 3yo.

I honestly thought it was a joke. It was not his birthday and even if it was? That’s weird! She said they have started a tradition that every time they go to a party he gets to blow the candles too and gets a HB song sang to him too. I was taken so aback that I said we are only celebrating my son’s special day so we are not singing happy bday to her kid.

Her kid cried, threw a tantrum and they left after that. Some family told me I was rude on refusing. Was I? I now feel bad but this is the reason my kid wanted a ‘solo party’.

One person said she’s NTA and that this kind of behavior from parents creates entitlement.

And this individual said she’s NTA and they don’t blame her one bit for what she did.