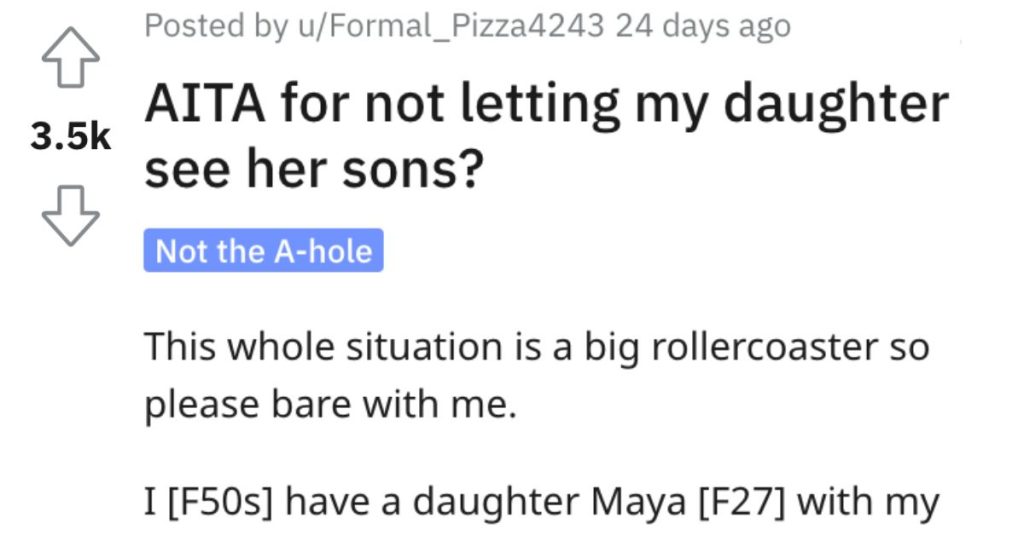 She Won’t Let Her Daughter See Her Own Sons. Is She Wrong?

Family drama is usually all the rage on Reddit’s “Am I the A**hole?” page and this story is definitely no exception.

Read on to get all the details and see if you think this woman is out of line.

AITA for not letting my daughter see her sons?

“This whole situation is a big roller coaster so please bare with me.

Maya got pregnant with our first grandchild, Jake [M10], when she was only 17. The father remained involved and my husband and I spent a lot of time looking after the little one so that Maya could focus on school.

Maya had another baby when she was 19, our second grandchild, Noah [M8]. Shortly after Noah was born, the father of both kids stopped being involved and he moved to another part of the country, however he did pay child support.

Up until around 3 years ago, Maya lived with us rent free. My husband and I looked after the kids a lot and we were the ones taking them to school and cooking them dinner. We understood that Maya didn’t have the financial means to move out but it was very frustrating and we felt that Maya wasn’t taking responsibility.

So 3 years ago, Maya started online dating this wealthy man who’s in his 40s. She announced to us that she’s in love with him and going to move to the other side of the country to move in with him, but that she can’t take the kids with her because he doesn’t like children.

My husband and I told her that this situation is absolutely insane and that she can’t be serious.

Maya broke down crying and started begging us to let her sign custody over to us so that she could “live her dream” and not be “shackled down”.

We agreed, not for Maya’s sake but for Jake and Noah. We got custody signed over and we are now Jake and Noah’s legal parents.

The poor boys were heartbroken when Maya left, and for the first few weeks they’d constantly ask to call her and drew pictures for her. We did try to call Maya so the boys could talk to her but more often than not she didn’t answer the phone. After a few months, she was unreachable and never answered texts or calls for weeks at a time.

We’ve been taking the boys to a child therapist in the past to help them process everything and they are doing much better now.

Last month, Maya called us and explained in tears that the relationship broke down. She asked if she could come back home and spend some time with her kids. It was very out of the blue after she ignored us for 3 years.

It was an impulsive decision that was possibly out of spite but my husband and I told Maya that we’re not letting her see her children. We think it would cause them a lot of heartache if she abandons them again, and that she’s an unfit mother who evades responsibility. I know we’re within our legal rights to do this but I want to know if a neutral party thinks we’re in the moral wrong.

One reader said she’s NTA and that her daughter doesn’t sound like much of a mother. 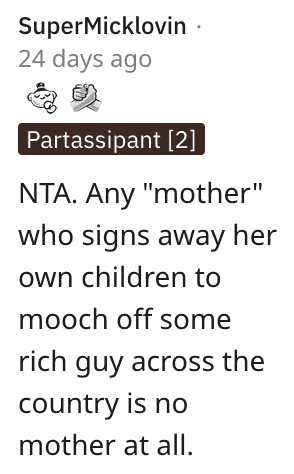 Another individual agreed and said that her daughter chose this. 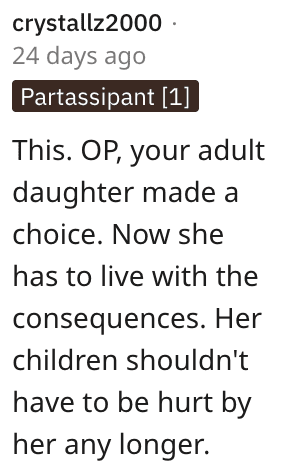 And this Reddit user also said she’s NTA and they recommended a movie that she might want to see that relates to her situation.