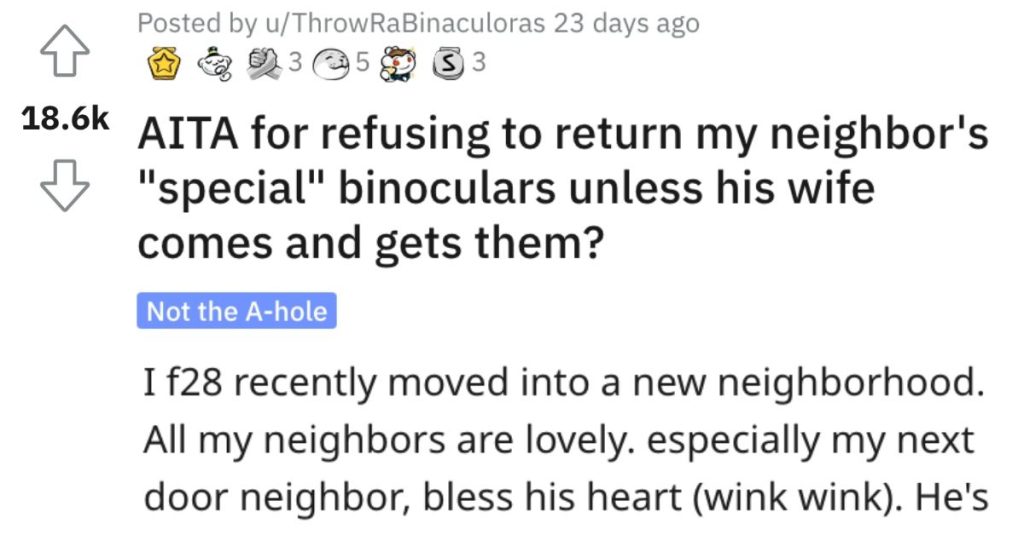 She Won’t Return Her Neighbor’s Binoculars Unless His Wife Comes and Gets Them. Is She a Jerk?

Well, this is a first…

We see a lot of interesting stories on Reddit’s “Am I the A**hole?” page but I can’t remember one quite like this…

Read on to see if you think this woman acted like an a**hole.

AITA for refusing to return my neighbor’s “special” binoculars unless his wife comes and gets them?

“I f28 recently moved into a new neighborhood. All my neighbors are lovely. especially my next door neighbor, bless his heart (wink wink). He’s married and has 2 kids.

I noticed that he’s been looking towards my house for a while. So far I’d caught him doing it twice. He had his binoculars with him and was basically, seemingly looking at my living room. I h**e confrontation so what I did was close the curtains and go about my day but it started escalating.

The other day he was peeking at my backyard (where I was sitting) from his balcony and his binoculars fell in my backyard. I looked up and he was gone. he knew that I saw him. I took the binoculars and put them inside.

In the evening, he came knocking on my door asking how I was done and whatnot. I rolled my eyes but kept it civil. He then brought up the binoculars and said that they “must’ve fell in you backyard earlier today”. I was like “hmm, wonder how that happened?” he said something about his kids probably messing with them and asked if I could go get them for him. I said I have them but I won’t give them to him unless his wife comes and gets them herself.

He looked at me shocked and angry and said that these binoculars are his, and they’re special because he has them from when he was in military. and said that his wife has nothing to do with this. I told him that I will give them back once his wife shows up and asks for them, all he has to do is send her over.

He threw a fit saying he can’t send her because then she’ll “misunderstand” the situation. I told him there is not misunderstanding if their kids we really the ones using the binoculars and insisted I won’t give them back til his wife comes and gets them. We got into an argument but he kept his voice as low as he could then left looking furious.

He’s been complaining about me wanting “to stir drama” and keeps demanding I return his binoculars back to him and leave his wife out of it. AITA?”

One individual said she’s NTA and she was right for standing her ground. 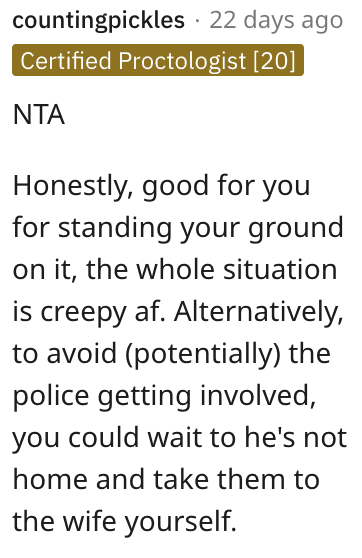 Another Reddit user also said she’s NTA and that she should get the police involved.

And this individual suggested that she should get her house locked up tight.