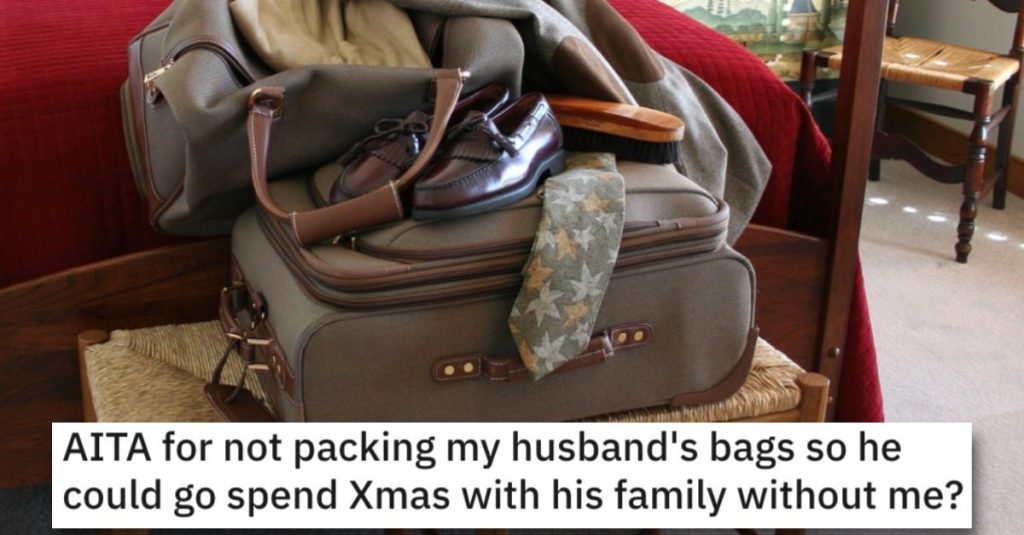 She Wouldn’t Pack Her Husband’s Bags So He Could Go Spend Christmas Without Her. Was She Wrong?

Pardon me, but you can pack your own bags.

But let’s see what the heck is going on here before we make up our minds.

AITA for not packing my husband’s bags so he could go spend Xmas with his family without me?

“I (F30) have been with my husband Ted (M34) for 4 years and we got married 2 years ago. His family and I haven’t really gotten along too well.

They’re rich and are all about image. I only see them on occasions but that’s when the drama is at it’s highest rate. Last Christmas Ted & I traveled to spend Xmas with them and it was awkward for some reason. After we went back to the hotel his mom sent me a list of all the things I’ve done wrong at her house like bringing wrong types of desserts and wearing “inappropriate” clothes (um I wore a blouse and leather jacket) and not standing up when guests arrived.

This year mother inlaw only sent an invitation to Ted to spend xmas with family. He told me his mom didn’t invite me because of my last year’s “negative points” and would rather have just him there this year.

I was flabbergasted I asked if he was actually considering going after his mom excluded me and he shrugged and said yes because he never spent xmas away from family his entire life and isn’t “about to break the cycle now”.

He suggested I go out, invite Regina (my best friend) over or just plan my own celebration and said “but nothing too crazy, capeesh?”. I was upset but hey! if they don’t want me then I shouldn’t force it and tried to not feel hurt and offended.

Yesterday Ted came home asking if his bags were ready since it was time to go. I said I don’t know and he was stunned. he freaked out saying I knew he was going to travel to his hometown and I should’ve packed his bags like I always do. I admit that packing his bags is what I do but ONLY WHEN WE’RE TRAVELING TOGETHER and I figured since he was traveling on his own then he should pack them himself.

He lost it saying I just caused him to be late and ruined all the (flight/hotel/other reservations) arrangements he had just because I was being bitter because I wasn’t invited to xmas celebration with his family.

We had a heated argument and he said “Look, you’re really overreacting right now because it’s not like I’m going away on a vacation to another country to spend time with some strippers and whatnot though I’m pretty certain you wouldn’t be as half pi**ed and agitated as you are now. I’m just going to spend time with my family and quite frankly, I don’t know what it is with you anymore”.

Then proceeded to call me petty and say I got him in trouble and “punished” him by not packing his bags for him knowing he was going to travel.

He packed his bags in a rush and ended up forgetting most of the gifts he got for his family. He’s now not speaking to me. AITA?”

This person said she’s NTA and that she should change the locks and hire a divorce lawyer while he’s visiting his parents. 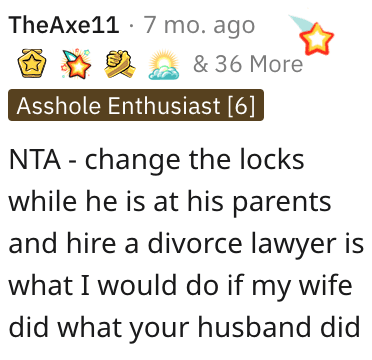 Another person said she needs to let him know about all of his “negative points.” 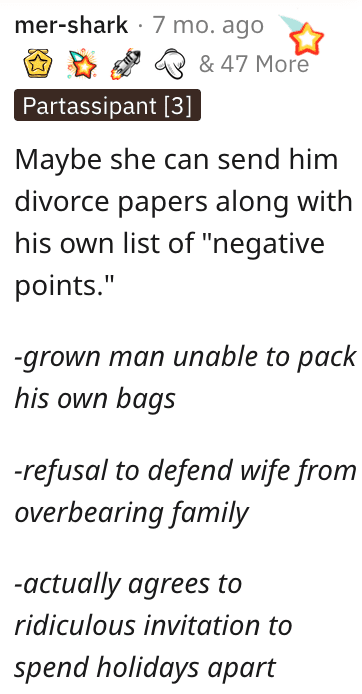 And this individual said she’s NTA and that this situation is ridiculous. 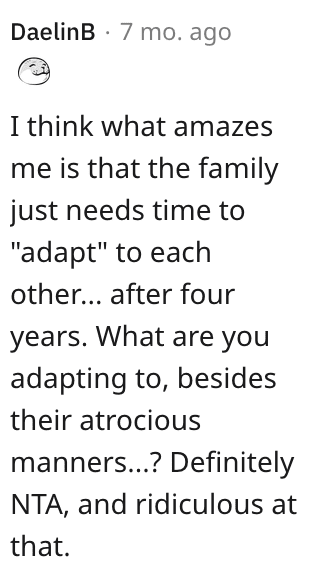