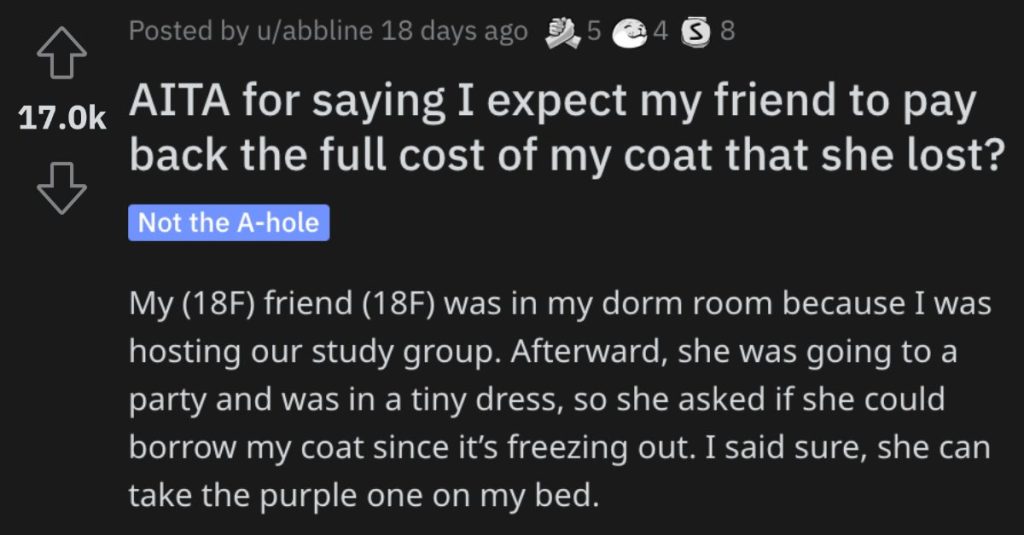 She’s Demanding to Be Paid Back for the Coat Her Friend Lost. Is She Wrong?

Call me crazy, but I think that you should probably pay someone back if you lose or destroy something that they own.

What a concept, right?

But we all know that people kind of tend to do what they want…no surprise there, I guess.

Take a look at this story from Reddit’s “Am I the A**hole?” page to see if you think this young woman is wrong for demanding that her friend shell out money for a coat she lost.

AITA for saying I expect my friend to pay back the full cost of my coat that she lost?

Afterward, she was going to a party and was in a tiny dress, so she asked if she could borrow my coat since it’s freezing out. I said sure, she can take the purple one on my bed.

She told me the next day that she was sorry and she’d lost my coat at the party. And she hadn’t taken the purple one. She had taken the black one on my bed since it looked warmer.

The coat she lost was a Moncler, and I never would’ve let her take it. I told her she could take my purple coat, which is the coat I take to parties since I’m not worried about it getting lost or stolen.

I’m really upset that she lost my coat, and I said she needs to pay me back the full cost of it. She said sure but didn’t realize how much it is, and then she got upset saying she could never come up with the money. I said that’s not my fault since she shouldn’t have taken it, and she became hysterical when I said I want all the money paid back.

AITA for saying she has to come up with the full cost of the coat and pay it back?”

Uh oh…now check out what Reddit users had to say about this.

One reader said that her friend is definitely on the hook for replacing the coat.

And another Reddit user said you should never be willing to borrow something you can’t replace. 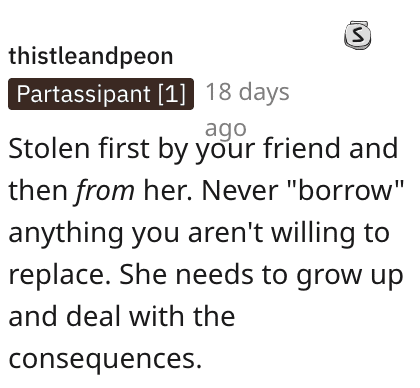