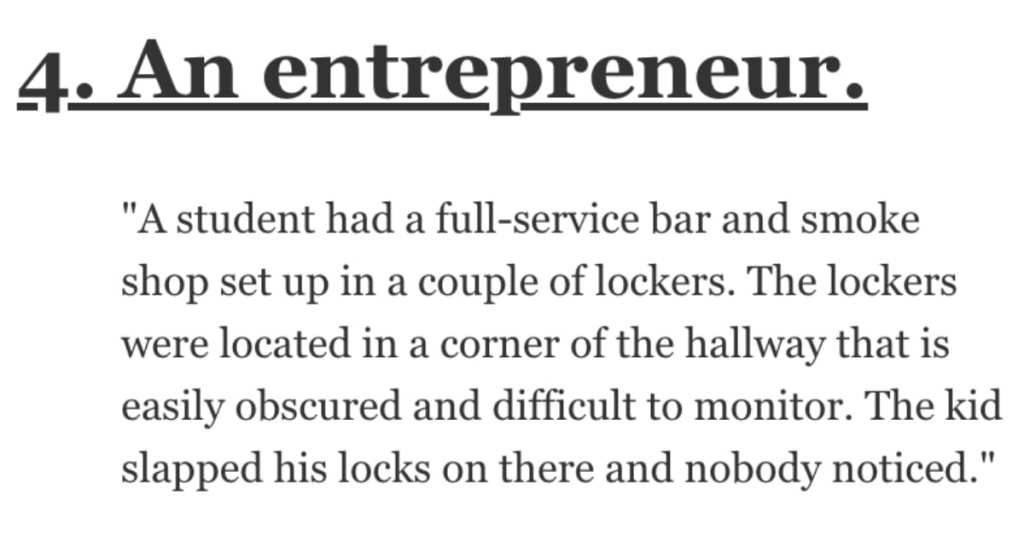 Teachers Share Their “That’s Impressive, but I Still Have To Punish You” Moments

Teachers really get put through the wringer, don’t they?

They deal with tons of kids day in and day out, they put up with all kinds of grief, and they definitely don’t get paid enough money…no doubt about that.

But, at least they get a lot of good experiences out of it.

Teachers on AskReddit shared the funny stories that made them say, “that was impressive, but I still have to punish you.”

“First 6 months of teaching. Grade 8 English. Kid did a 360 on one leg of his chair. I was impressed but gave him a time-out because it was dangerous

. Part of the requirement for time out was that students identify what got them sent out in the first place. “I did a mad 360 on my chair but Miss said it wasn’t safe”. I’ve still got that time out sheet on my desk 2.5 years later.

“The first time I caught students cheating it was two 8th grade girls that had all of the same wrong answers on a vocabulary matching test.

I pulled the girls aside after class to ask about it, and after some sheepish grins they both admitted that a third girl (their friend who was an A+ student) had fed them both incorrect answers on purpose. She screwed over her friends because she was pissed they were mooching!

For punishment, the first two girls got to keep their very poor test grades. The mastermind got “your friends are mad at you” as her punishment. Natural consequences.”

” I was on recess duty with a bunch of 7-9 year olds one day, and this kid ran up to me to point out a couple of other kids fighting.

I turn around, and yep, looked like a fight. As I went over there, a couple things stood out – the two fighting were besties (so it was weird that they were fighting), and they were making sound effects.

Dudes were playing out some epic Star Wars battle, complete with stick sabers and the blaster noises and everything. Their stunt coordination was on point, y’all.

I had to make them put down the sticks and holster their finger guns (by the rules, I should have sent them to the principal to be suspended for the finger guns, but that’s ridiculous for consensual play-acting, so no), but commended them on how real it all looked.”

“A student had a full-service bar and smoke shop set up in a couple of lockers.

The lockers were located in a corner of the hallway that is easily obscured and difficult to monitor. The kid slapped his locks on there and nobody noticed.

When he was caught, the lockers were found to have several makeshift shelves in them, and contained several bottles of hard liquor, some solo cups, and paper shot glasses in one of them.

The other contained a backpack containing some weed and various other drug paraphernalia for sale. The kid had quite the little enterprise going and god knows how much money he made before he got caught. I was shown pictures of what was in the locker, and I had to admit…..given what he had to work with, it was quite an impressive setup.

Of course, I’m sure he was brought up on a significant number of charges…..but still, even the principal had to give him credit for the setup.”

“My coworker and I discovered that one of our students was running an underground crime syndicate selling individual Icebreaker mints for 50 cents a pop.

We agreed not to punish him or inform the administration, but we did confront him privately and told him he needed to stop before it got him in trouble.

He had about a half dozen employees and was selling at every grade level by the time we put an end to it. Kid was a C student at best, but he’s definitely going places.”

“I’m an art teacher. Had a student submit his art book with a great variety of different d*ck drawings.

One was an impressive “concoction” of two cat heads as the testicles and a detailed “furry” shaft. As is was assessment I had to ring his mother to let her know.

Me: your son has handed in his assessment and it has penises drawn all over it Mother: I’m sorry you find my son’s style of art offensive Me: personally I am not offended, however it does go against our school’s graffiti policy…””

“I teach high school ESL class where most of my students either don’t speak any English or they speak very little. I had a student in there who was constantly disruptive and liked to bully the other kids to “establish his manliness”.

One day, the disruptive kid is doing his normal annoying shtick and out of nowhere, my quiet little Latina in the corner of the room, in the clearest pronounced English I’ve ever heard her speak, said, “you stupid motherf*cker”.

I had to hold in a laugh. I then had a quick convo with her and congratulated her on the clear pronunciation but also told her she couldn’t say that in class.”

8. Started ratting each other out.

“My students had one kid distract me while I was grading tests, and another took a photo of the answer key. They thought it was like Mission Impossible.

I realized when I graded their tests. There were many that I suspected weren’t ready; I was going to let them work through corrections for credit back. Well, too many did better on this than they should have. One kid in particular, who consistently made D’s, no matter what I tried, made a B on this stoichiometry test.

The next day, the whole class had an open response quiz on the same material. Only 3 questions…. After that, those kids would narc on each other left and right.”

“Teaching 8th grade Reading is always an adventure and I have SO many stories that would fit (usually 80-90% of my classes were the “bad kids”).

Anyways, this one 8th grade dude was a jack*ss to literally everyone. He was aging out of 8th grade, so he knew no matter what he did he’d move on to high school. He was also one of the main bullies of the hallway – parents always took his side “my sweet baby would never do that etc”.

One day he told one of the girls in his class that she “wasn’t really black” (they were both mixed). The girl looked at him, looked at the line of teachers, shouted “you know his parents won’t let him get s*it for that!”, and jumped him.

And I mean really jumped him. By the time the teachers broke then up she had a scratch on her arm – he had a black eye, a busted lip, bruises, etc. Apparently when they got to the office she jumped him again because he dared to looked at her.

They both ended up being suspended for 5 days. When he came back he was telling everyone he just didn’t feel right fighting a girl. His track record said otherwise. So did the video.

The 8th grade principal totally let all the 8th grade teachers see the video and everyone cheered for her. While none of us condoned the fighting, we knew that it was the wake up call he needed.

If he had pulled that same sh*t at the high school, he very well may not have walked out.

He didn’t bully anyone the rest of the year and his grades ended up going up by nearly 20 points in every class.

The girl was basically treated as royalty by her classmates for the rest of the year.”

A couple of my senior students were barred from attending prom for setting off stink bombs at the homecoming football game.

I know I should’ve been mad, but they made the stink bombs themselves and they could explain some of the chemistry behind them.

“I’m a preschool teacher and I’m pretty sure the kids are all wizards.

Sometimes they’ll do something and it’ll just work out way too well.

“It wasn’t so much a single impressive event as it was just perfectly executed every time. This kid, Jordan, could teach a masterclass on Roasting his classmates.

It was staggering how quickly he could rattle off an absolute shredded burn in response to something they said or did, and he did it in such a way that even the recipient would be in a state of awe at it. He was like an anti-hero who’s primary weapon was incinerating people with words.

Of course, as a teacher, I couldn’t just let it happen and had to put on my poker face and write it up but there were some times where he’d roast some kid on something that was VERY valid. He’d say the type of thing that in any other environment where I wasn’t having to lead by example, I’d just have to say, “I mean, he’s got you there”.

Like I remember in one example, he basically called out this other kid for creeping on a girl in class. The exact wording escapes me, but he basically called him a peeping tom and it was 100% accurate. The class EXPLODED in laughter and this kid looked like he’d been hit in the head with a frying pan. Absolute stunner.

It took all of my self-control to not burst out laughing too. And to top it all of, it never felt overly malicious. Like there was always this slight uptick in the delivery that softened the blow just enough that your immediate response wasn’t anger.

It was honestly not terribly surprising though because Jordan was also brilliantly talented as a writer and was exceptionally smart and witty. Roasting his classmates aside, he was very eloquent without it feeling performative or fake.

I almost wish he’d been a worse writer so it’d have been easier to steer his creativity from roasting people into something else, but he had no shortage of mental real estate for both.

I ended up losing track of him after I left, but I’ve no doubt that he’s successful in whatever he’s doing now. That, or he was just Loki in disguise.”

We want to hear from more educators!

In the comments, tell us about times when kiddos did things that were wrong but still impressed you.