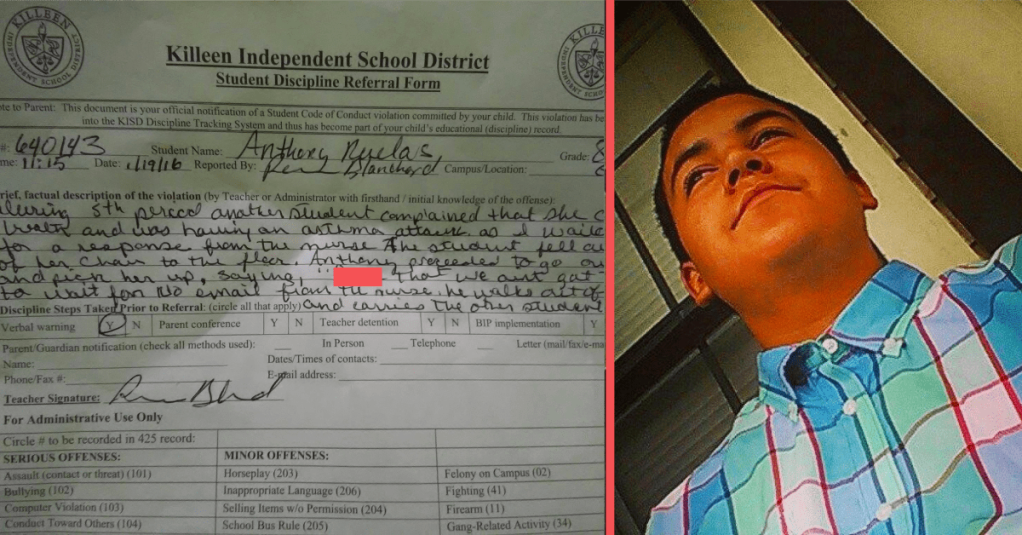 Growing up, we’re taught to do as our teachers tell us. But what happens when the teachers are wrong?

Sometimes, as one boy showed, that’s when you have to break the rules. 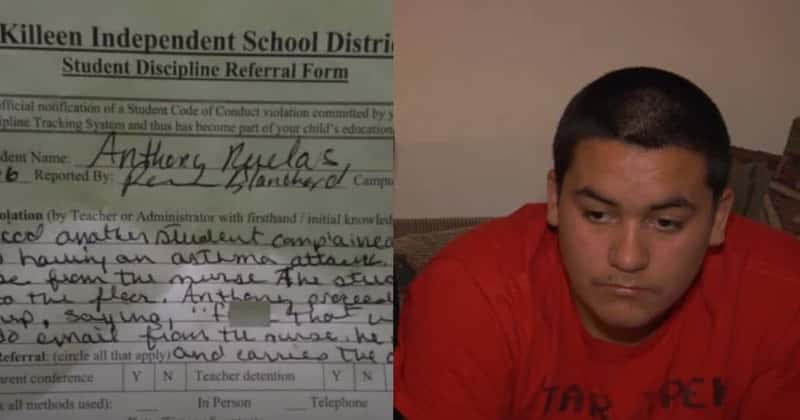 In January of 2016, all 8th grader Anthony Ruelas should have been worried about was graduating from Gateway Middle School in Kileen, Texas, and heading off to high school.

But when a classmate suffered an asthma attack, everything changed.

It all started when a girl in his class began to wheeze and gag. It was clear that she was having a hard time breathing. The girl told everyone that she was having an asthma attack. However, the teacher would not allow anyone to leave the class; instead, she opted to wait for an email reply from the school nurse.

The teacher told students to remain in their seats.

But after several minutes passed, and the girl fell out of her chair gasping for breath, Anthony couldn’t wait any longer.

With the teacher unwilling to take action, Anthony scooped up his classmate, stating:

“We ain’t got time to wait for no email from the nurse.”

And he was likely right.

Unfortunately, the school has a zero tolerance policy. Circumstances didn’t matter. Anthony was suspended for 3 days.

Did I do right or wroung

His mother, the parents of the afflicted student, and readers around the world were outraged by the school’s treatment of Anthony.

The story was even picked up by The Washington Post.

The response from the community was overwhelming. As WaPo reported at the time:

A San Francisco businessman has even offered to pay for Ruelas to participate in a two-day Wilderness First Aid course in Austin. [Anthony’s mother] said her son has expressed interest in becoming a fireman or an EMT and is “very excited” about the offer, which he accepted.

And the Truth About Nursing website sent him a framed Citizen Nursing Award certifying that he:

Acted with courage and foresight to assess the dire health situation of a fellow student and took bold action to save her life, despite forceful contrary instruction and likely punishment from misguided authority figures.

Now Anthony is all grown up.

According to his Facebook page, he’s a student at Texas Tech, and he even recently bought his first car.

It’s nice to see that Anthony didn’t let that moment of adversity keep him down.

What do you think? Was the school right to enforce the zero tolerance policy even though he saved a girl’s life?