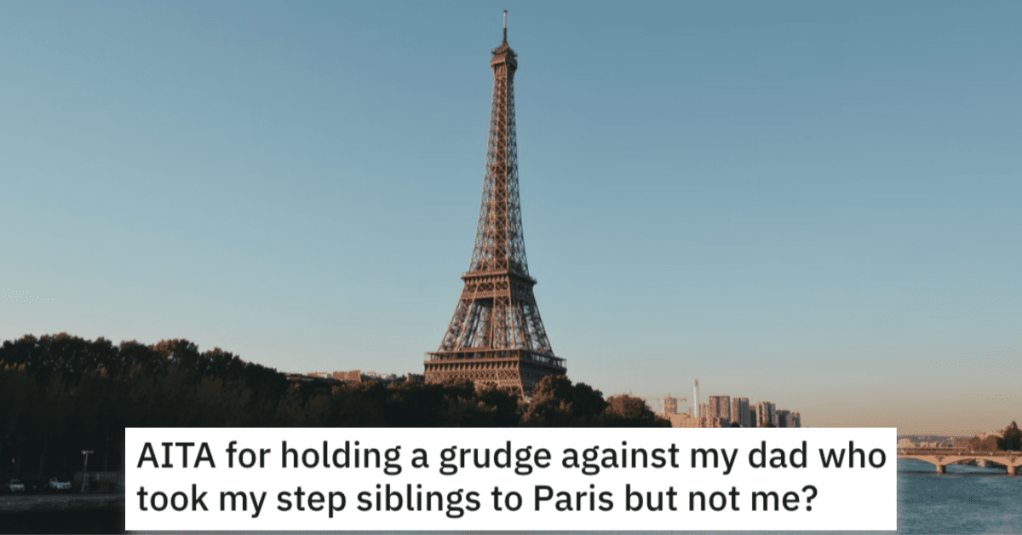 But everyone else is!

And you can understand why this teenage girl is fired up because her dad is taking her step-siblings to Paris…without her.

Read on to get the whole story!

AITA for holding a grudge against my dad who took my step-siblings to Paris but not me?

“A few weeks ago I learned from my step brother’s TikTok that my dad, step mom and two step brothers are in Paris. I was staying with my mom at the time. I’m F16 and would have loved to be there but they didn’t even tell me they were going.

I immediately sent a text to my dad asking if they’re enjoying their time in Paris and despite reading it he didn’t reply until late at night. Then he tried to play dumb and said it’s great and he wished I could be there. YEAH ME TOO! So I replied that he could have taken me and he said it wasn’t possible and we’ll talk about it later.

So when they returned I told them that I’m hurt that they didn’t take me. My dad took me aside and told me that their finances are very tight, this vacation was a gift from step mom’s parents and they only bought it for my dad, their daughter and their own grandchildren and not me. He reminded me that I shouldn’t act in an entitled way. They were effectively guests (even though the grandparents weren’t there, they just paid for it) and I wasn’t invited so I shouldn’t act in an entitled way.

I wasn’t convinced, they could have refused to go without me, paid for me themselves, gone somewhere cheaper, stayed a little less longer, or asked my mom to pitch in (and she would have). Me not being there was exclusionary. If this was only about money they could have made it work. So I told my dad that I was disappointed in him.

So came last night and my step mom’s parents came over for dinner. The subject of the vacation came up and everyone was talking about it and I was just sitting there being quiet until I thanked them for doing such a nice thing for the “family” while my dad looked at me in a frowny way.

Everyone went quiet, my dad tried explaining that I should have understood that this was a very expensive gift, I’m acting like an entitled brat and should go to my room if I can’t behave myself. I said it doesn’t seem like I belong anyway and told them to enjoy “your” family dinner and left.

Later the grandmother came to my room and tried explaining that they gifted this to their grandchildren and couldn’t afford to include me as well. She said they initially only had a budget for 3 (their daughter and grandchildren) but stretched themselves to 4 to include my dad as well, but while they wished they could have done it for me to they could really not stretch it to 5.

So I told her my problem is with my dad and I have no beef with her, but she doesn’t get to act like she cares about me either and it’s ok. I was like “I’m a stranger to you and you don’t care about me, so have some balls, put your big girl pants on and wear it on your sleeve” and asked her to get the F out of my room. She left and I heard her telling my dad that I was very rude to her, so I’m grounded until further notice.

Am I acting like an entitled brat and AITA in this situation?”

One person said their dad’s actions show them all they need to know.

Another Reddit user said they’re NTA and that their dad has a new family now.

And this individual said the worst part is that they found out about this on social media.