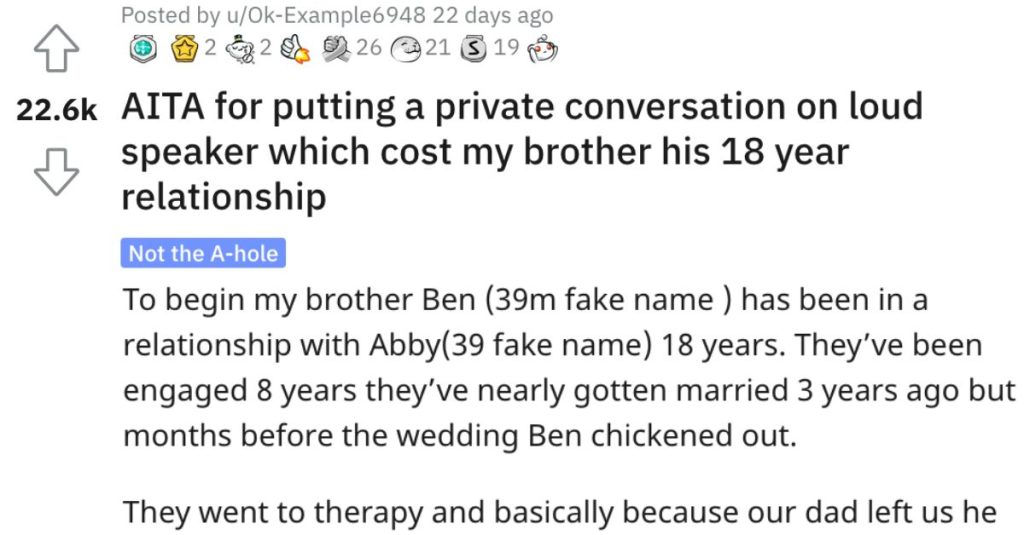 They Did Something That Caused Their Brother to Lose His Long-Term Relationship. Were They Wrong?

Now, this is a story you won’t soon forget.

This person did something that ultimately cost their brother his long-term relationship with his girlfriend and now they are asking the fine folks on Reddit’s “Am I the A**hole?” page if they went too far.

AITA for putting a private conversation on loud speaker which cost my brother his 18 year relationship?

“My brother Ben (39m) has been in a relationship with Abby(39f) 18 years. They’ve been engaged 8 years they’ve nearly gotten married 3 years ago but months before the wedding Ben chickened out.

They went to therapy and basically because our dad left us he has issues with commitment. We thought over the last year he was finally gonna step up for Abby and be the partner she deserves. He did seem a bit anxious leading up to the big day but assured everyone he was ok

Everyone tried to calm her down saying it was traffic or he probably had a monster hangover. Well an hour passed, than two, than three and than after the four hour mark Abby said fuck she was going back to the hotel call her when he landed.

I went back to the hotel with a very broken looking Abby. We drank and ate food for another hour before I got a text from my brother in law saying they found him in a bar and they were trying to talk him into GOING TO HIS OWN WEDDING. My sister rang her husband and heard him in the background he was literally acting like a 5 year old who didn’t want to go to the doctor

Here’s where I might be the a**hole of the century. I walked into Abby’s room and told her be quiet than I rang my brother in law put him on loud speaker and asked him what was going on than for him to put Ben on the phone the d**nk fool started saying s**t like he didn’t think she was the one and he is only with her because they’ve been together to long and he is scared to be alone

I let her hear everything I won’t lie I felt like a monster when she started crying. Abby than grabbed the phone told him he had one hour to get to the church or it was over for good

So he ended being left at the altar and she went on the honeymoon alone. I’ve been disowned by everyone expect two siblings (sisters) and I had to get Abby’s maid of honour to collect my suitcase from outside the hotel (mom dumped out when she found out)

I’m the full blame for ruining their relationship and 98% of my family h**es me.”

This person said this person is NTA and that they did this woman a favor. 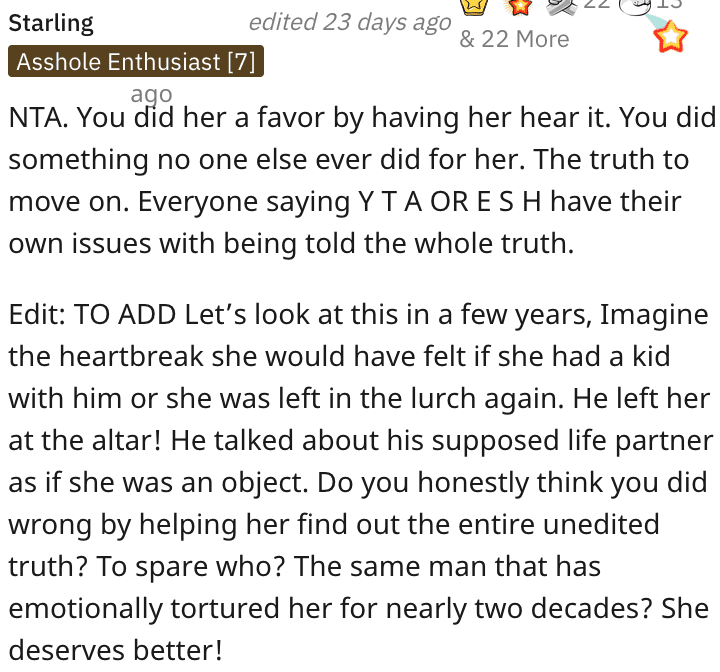 And this individual agreed that they were NTA and that the brother is a coward. 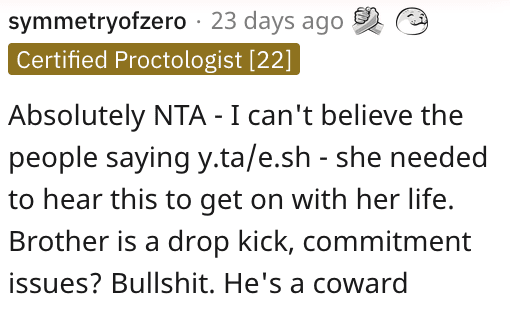 Another Reddit user called this person an a** with a heart of pure gold…that’s one way to look at it. 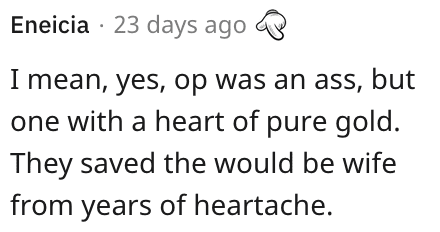