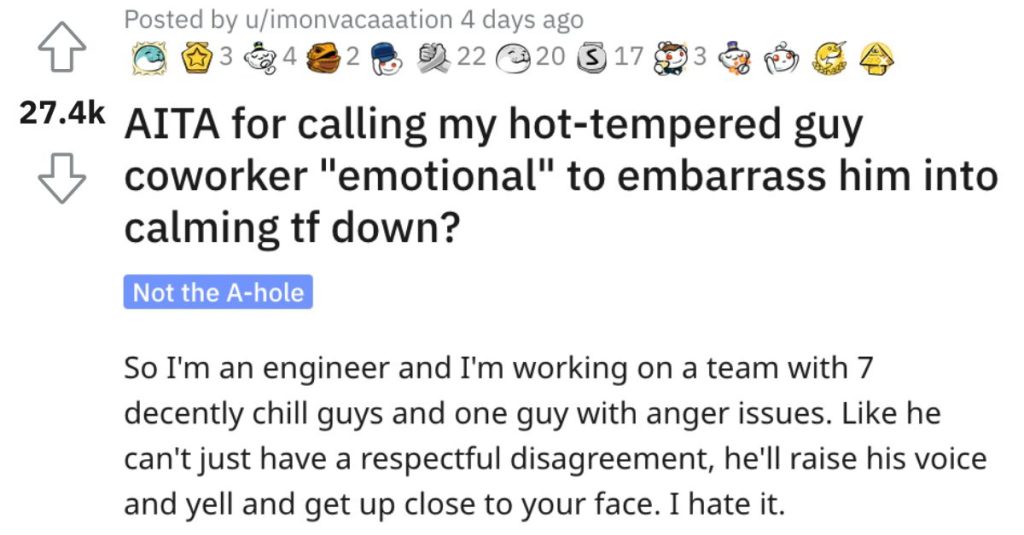 They Embarrassed a Hot-Headed Co-Worker. Were They Wrong?

In my experience, the more you try to cool down a hot-headed person, the worse it usually gets…

So did this person escalate this situation with their co-worker?

AITA for calling my hot-tempered guy co-worker “emotional” to embarrass him into calming TF down?

“So I’m an engineer and I’m working on a team with 7 decently chill guys and one guy with anger issues. Like he can’t just have a respectful disagreement, he’ll raise his voice and yell and get up close to your face. I h**e it.

So I started by just complaining to my boss about it. And he brushed it under the rug saying he is just like that. And if I thought he was bad now I should of seen him 10 years ago before he “mellowed out”

It makes me wonder what he was like 10 years ago because he sure ain’t mellow now.

It’s also a small enough company that there’s no HR, only the corporate management. Which didn’t help.

So I took a different approach. I stopped calling him “angry”, or calling what he was doing “arguing” or “yelling”. I just swapped in the words “emotional” or “throwing a tantrum” or “having a fit”

So I started just making subtle comments. Like if I had a meeting with him and he got a temper, I’d mention to the other people “Wow, it’s crazy how emotional Jay got. I dunno how he has the energy to throw a hissy fit at 9 am, I’m barely awake”

Or when my boss asked me to recap a meeting he missed, I told him “Dan, Jack, and James had some really great feedback on my report for (this client). Jay kinda had trouble managing his emotions and had a temper tantrum again, but you know how he gets.”

Or when a coworker asked why he was yelling I’d say “Honestly I don’t even know, he was getting so emotional about it he wasn’t speaking rationally.”

I tried to drop it in subtly and some of my coworkers started picking it up. I don’t think consciously, just saying stuff like “Oh, another of Jay’s fits” or something.

I got gutsy enough to even start saying to his face “Hey, I can hardly understand what you’re trying to explain when you’re so emotional”

And again my coworkers started picking up on it and I even caught several of them telling him to get a hold of himself.

After a while, he started to get a reputation as emotional and irrational. Which I could tell p**sed him off. But he stopped yelling at me as much.

Anyway, he slipped once this week and I just said “I really can’t talk to you when you’re being this emotional” and he blew up at me asking why I was always calling him that. I shrugged and said “dude you look like you’re on the verge of tears, go look in the mirror before you ask me” and he got really angry I suggested he might start crying. (That was a kinda flippant comment, he was red faced angry not tearful angry, and I could tell.)

I feel like a bit of a d**k for being petty and trying to gaslight this guy into thinking everyone around him sees him like a crybaby. But it also mostly worked when the “proper channels” didn’t

AITA for calling my coworker emotional when he got mad?”

This reader said they’re NTA and that they were only telling the truth. 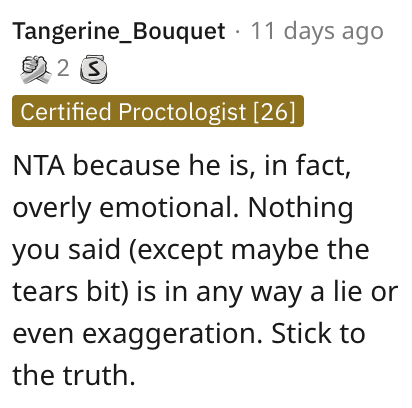 Another individual said that being honest is always the best policy. 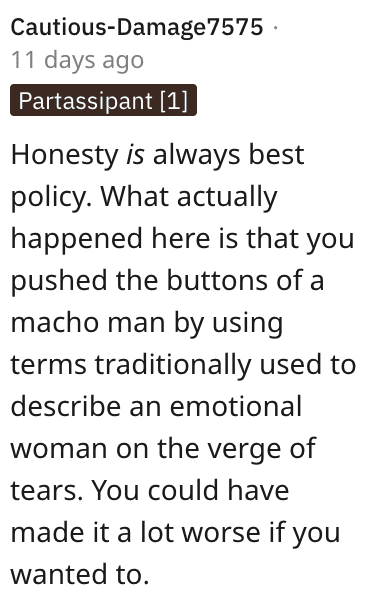 And this Reddit user made some good points about toxic masculinity. 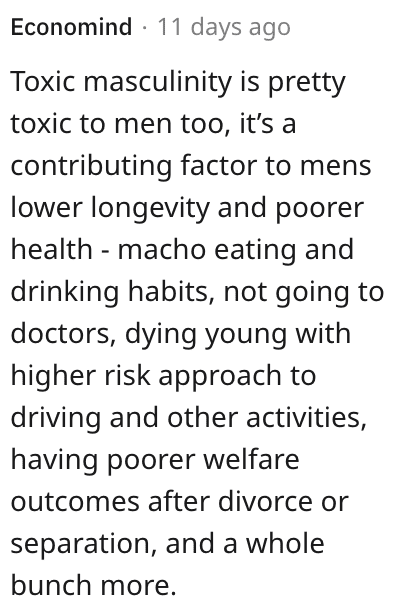