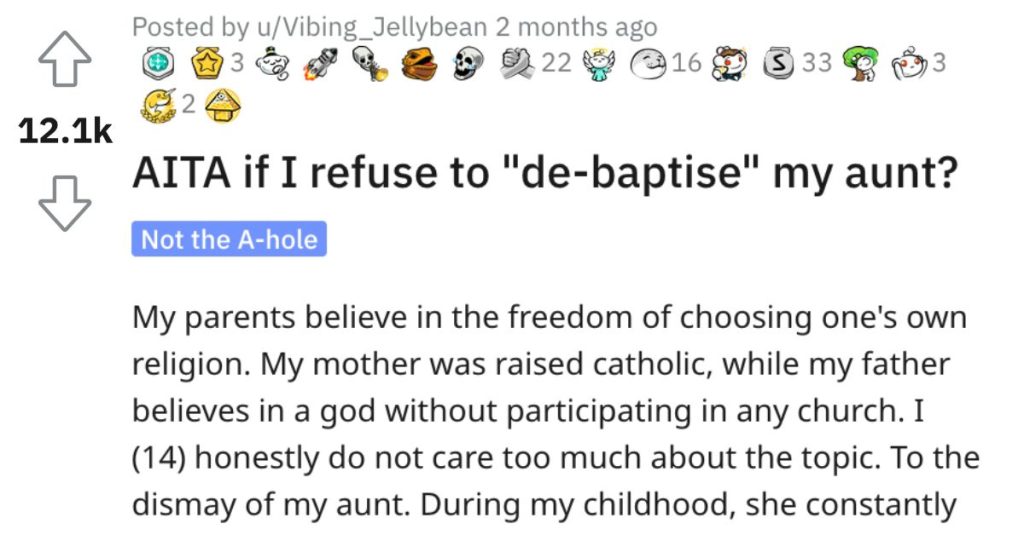 They Refuse to De-Baptize Their Aunt? Are They Wrong?

Hmmmm, this sounds like a pretty weird one just based on the title alone.

You never really know what you’re gonna get!

Check out this story and see if you think this person was wrong for what they’re doing to their aunt.

AITA if I refuse to “de-baptize” my aunt?

“My parents believe in the freedom of choosing one’s own religion. My mother was raised catholic, while my father believes in a god without participating in any church.

I (14) honestly do not care too much about the topic. To the dismay of my aunt. During my childhood, she constantly tried to pressure my mother into getting me baptized. Whenever I visited them, she would try to push Christianity on me (she would read the bible to me and take me to her church – among other things). This made me very uncomfortable to the point where I did not want to visit anymore.

I recently developed an interest in herbs and plants. This somehow convinced her, that I practice witchery. Now she constantly switches between trying to “save” me and making a point of avoiding me. Most of the family thinks her silly – but like always, when she is acting crazy, everyone just accepts it. Since I did not budge, she focused on my brother (5).

He is friends with my cousin (6) and therefore spends a lot of time at their house. On his latest visit, my aunt decided to make an appointment with a priest, forge my mother’s signature, and get my brother baptized.

After my brother told my mother about the incident (which my aunt told him not to do), she confronted my aunt on her next visit. My aunt proudly confessed to having “saved” my brother and a screaming match ensued. As I already mentioned, my parents strongly believe, that everyone should be able to choose their own beliefs and not join a church until one is old enough to make an informed decision.

To summarize my aunt’s words: she could not believe that our mother was wilfully condemning us to hell and that it was no wonder I had become a satanic witch. She HAD TO act because my mother obviously couldn’t be brought to her senses and someone had to save the boy.

In a moment of anger, I went to my room to get one of my pots (I have one pot in the shape of a skull) and filled it with water. While they were still screaming at each other, I poured the water over her. Then I declared her to be now baptized a witch and the lawful wife of Satan. I will be honest, I enjoyed the expressions of shock and then panic on her face. She told me to undo what I did. I refused.

Once she realized, she could not convince me, she stormed out of the house. Now, she told the whole family about it and my grandparents and other relatives have been bombarding my mother with h**eful messages.

My mother says she understands why I did what I did, but that I need to “undo” it to keep the peace. I am supposed to make a show of “de-baptizing” her and declaring her Christian again.I am just tired of everybody constantly talking about religions and fed up with my aunt and everybody’s endurance of her.

If she can just go around and baptize my brother, why can’t I do the same to her

AITA if I do not comply with my parent’s wishes?”

Now let’s see what Reddit users had to say about what happened.

This reader said this person is NTA and that her aunt needs to go get re-baptized if she’s so worried about it. 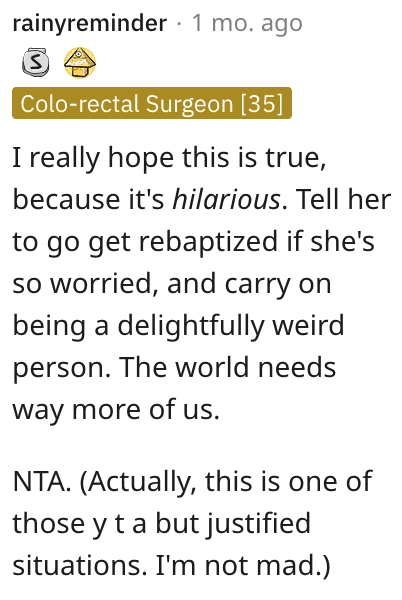 And this Reddit user said their aunt could take care of this by going to see a priest if she’s really that worried about it.

Another reader also said they’re NTA and that their aunt sounds CRAZY.