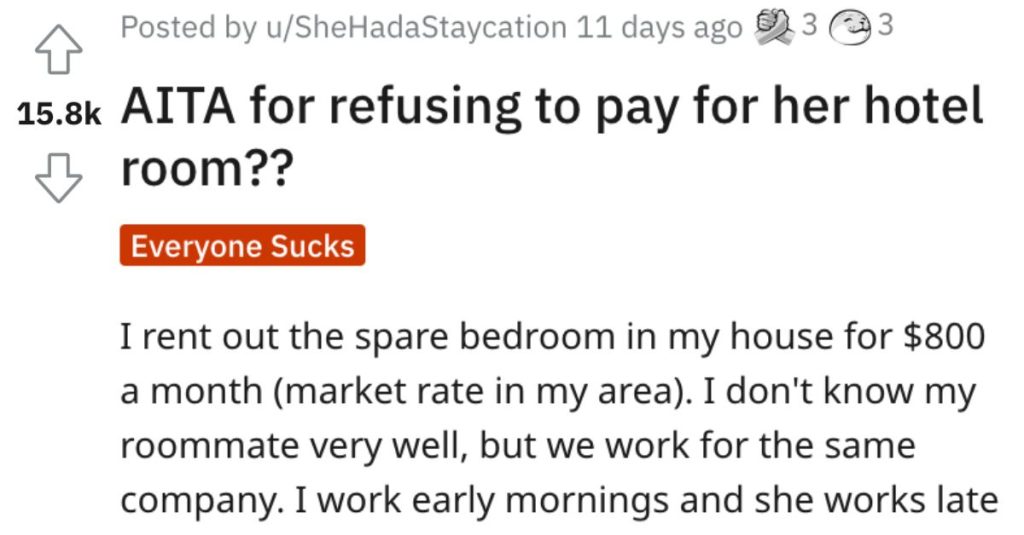 They Won’t Pay for a Hotel Room for Their Tenant. Are They a Jerk?

I was renting a house once and the heat stopped working in the middle of January. The temperature inside the place dipped to the mid-50s and it was pretty brutal.

And my landlord was such a nice guy that he put me up in a hotel until everything got fixed.

But that doesn’t happen all the time…

Check out this story and see if you think this person was a jerk for not putting someone up who rents a room from them.

AITA for refusing to pay for her hotel room?

“I rent out the spare bedroom in my house for $800 a month (market rate in my area). I don’t know my roommate very well, but we work for the same company. I work early mornings and she works late evenings. So we’re often ships passing in the night.

On Friday my hot water heater broke. The home warranty guys said they couldn’t get anyone out until Monday morning. It’s hot as balls right now, so I wasn’t too upset. A few cold showers won’t kill anyone. I texted my tenant “hot water is out until Monday” and she responded ?.

I didn’t see her all weekend, which is normal, as I said. The guy got here at 8AM to fix the heater. When he was done I texted her to let her know the hot water was back on. She hits me with this gem. “My hotel bill was $250. Do you want to reimburse me now or deduct it from next month’s rent?”

I stared at the text for a good while. I didn’t even know she was gone. She got a hotel room just for hot water? That’s so extra. She could have showered at work, but she got a hotel room? I texted “hey, I didn’t know you left. Rent is still due in full on the first of the month, regardless of if you choose to sleep elsewhere for a weekend.”

She texted me back “there was no water. I couldn’t stay there. You’re my landlord and have to provide me with livable accomodations.”

I texted back “there was water, just not hot. If it was winter, you might have a point. Rent is still due in full. Failure to pay rent will result in me filing with the court, which will impact your credit.”

She stopped responding. I texted a friend who said I was way too harsh and should have just countered with a $50 discount for those two days or something. Which, sure, if she’d asked for a $50 reduction that would have been reasonable. But I’m not paying for her hotel and the audacity of her to ask me p**ses me off.

But I know jumping to talking about filing a thirty days was a bit dramatic. Was AITA?”

This person said they’re NTA and that they might want to find a new tenant. 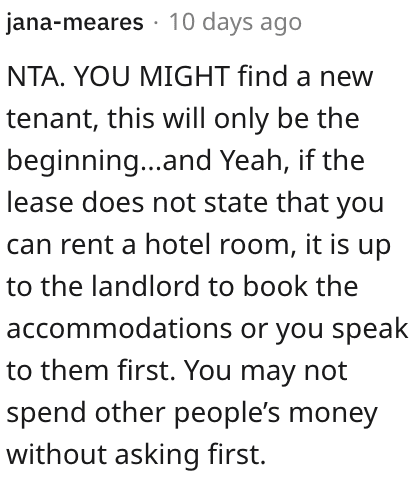 And this individual said EVERYONE SUCKS HERE. 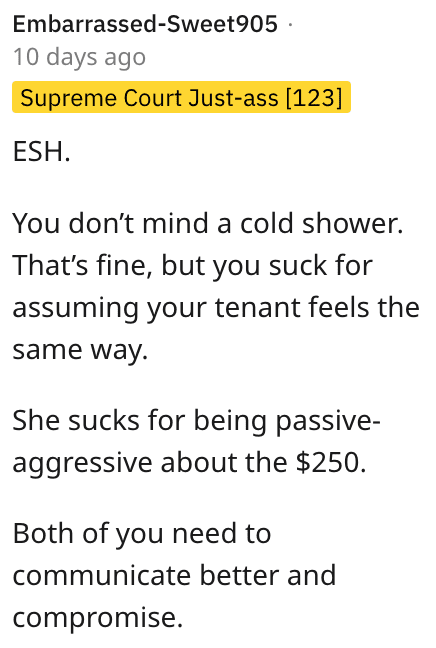 Another person said they’re NTA and that they don’t owe the tenant anything for this. 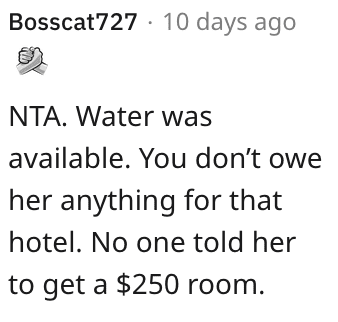