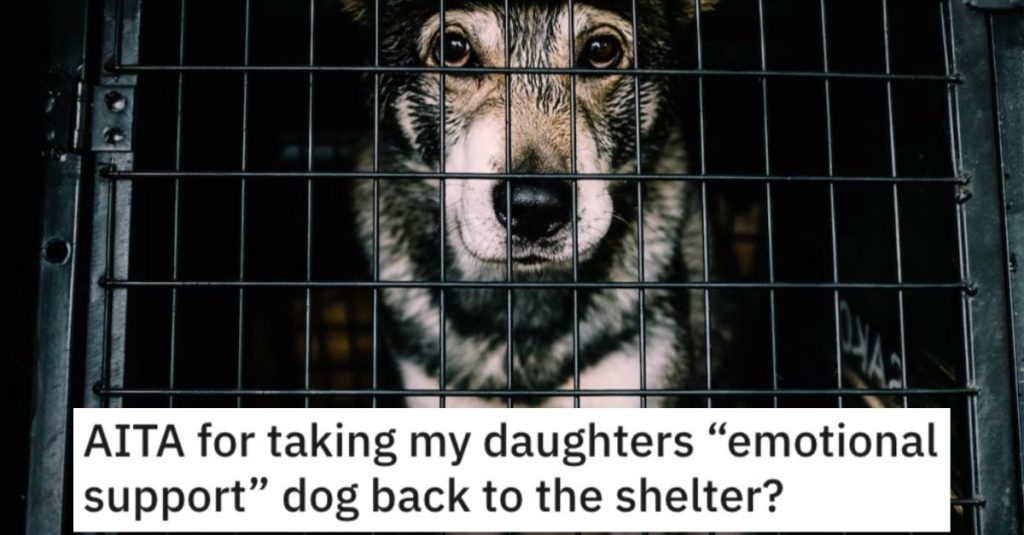 Oh, man, anytime I read about a dog being returned to a shelter, regardless of the circumstances, I get a little misty-eyed.

Because it’s usually not the dog’s fault that human beings are having conflict about having an animal in the house!

So is this dad an a**hole for what he did with his daughter’s dog?

Check out this story and see for yourself…

AITA for taking my daughter’s “emotional support” dog back to the shelter?

My daughter had been having problems with her anxiety and depression, school had been very hard for her and she asked us if she could get an animal for “emotional support”. I asked her why we couldn’t just put her in regular therapy again but she said she didn’t really like her last therapist. Basically she doesn’t want to try it again.

I was pretty against bringing an animal into the home as my daughter can barely keep her room clean and remember to wash her dishes, much less take care of an animal. And I absolutely refused to do anything for the dog because I work long hours and didn’t want to be picking up messes when I got home. My wife said I was being unfair and that this could be what my daughter needed to get back in good spirits.

So we got her a dog. We let her pick out from few select breeds, since certain breeds tend to need higher requirements for care (such as frequent grooming and other traits) and I was against getting some breeds just because of personal preference.

The dog was great at first and it got along with my daughter and wife greatly. Me not so much, but it could probably sense I didn’t really like it either. But then it started getting out of its leash on walks, tearing up the couch and various other toys we bought it. My daughter started forgetting to let it out, so I’d come home to find poop and pee all over the brand new carpet.

I warned her twice that if she didn’t start taking responsibility that the dog would be going back and she gave me excuses saying she was feeling depressed again. She said she would do better, but didn’t. Ultimately, I got fed up so one day when she went to school I loaded the dog in my truck and told the shelter he wasn’t a good fit for us.

Obviously when she came home she was upset. She was saying the dog was her best friend but I told her that she wasn’t taking very good care of him, and he didn’t deserve that. Wife says it was very harsh to just take the dog back while she was gone, but she agrees daughter wasn’t responsible. My daughter has been saying I brought back her severe depression and we haven’t been talking.

This person said he’s slightly an a**hole…but ultimately NTA because this was what was best for the dog. 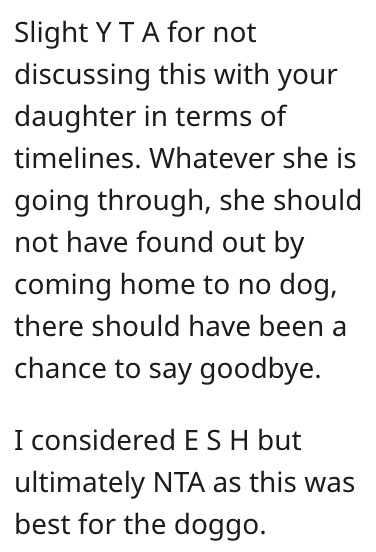 And this Reddit user said the mom is the person who is the a**hole in this situation.

And one individual said he actually should have returned the dog sooner.