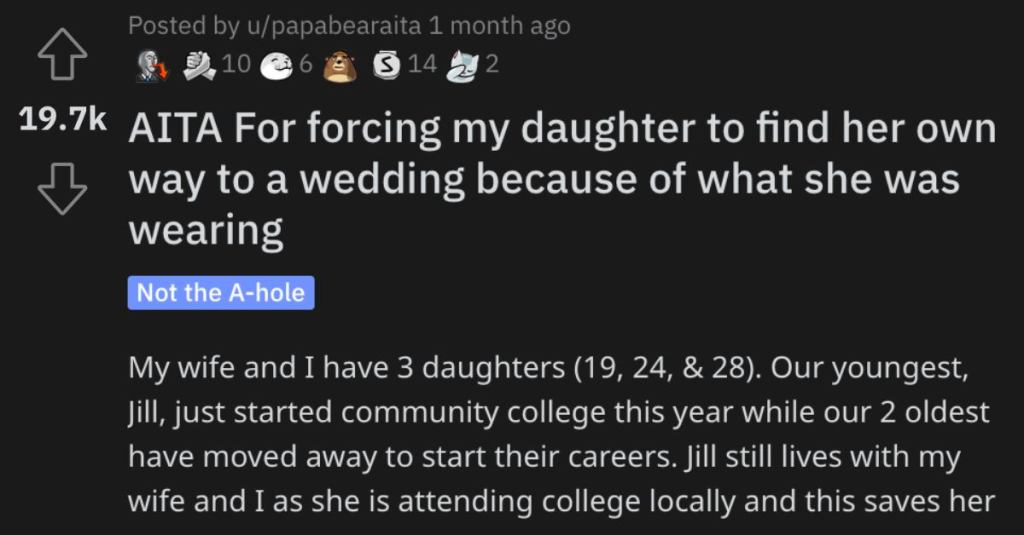 This Man Forced His Daughter to Find Her Own Way to a Wedding Because of What She Was Wearing. Was He Wrong?

I guess everyone has their limit, huh?

Even when it’s your own daughter…

And you’re going to a wedding…

Check out this story from the “Am I the A**hole?” page and see if you think this guy overreacted.

AITA For forcing my daughter to find her own way to a wedding because of what she was wearing?

Our youngest, Jill, just started community college this year while our 2 oldest have moved away to start their careers. Jill still lives with my wife and I as she is attending college locally and this saves her money. This past weekend we were invited to my niece’s (and goddaughter) wedding a couple hours away. The dress code was semi-formal so men were expected to wear suits and women in dresses.

As we were getting ready to leave, Jill was taking her sweet time getting ready and I was kind of nagging at her to get going. She had been out late the night before with friends and I’m sure she was feeling the effects of that. When she was finally ready to go, she was wearing some kind of black, spaghetti strap halter-top thing with leggings.

I told her that was not an appropriate outfit for her cousin’s wedding and that she needs to change into something else. She told me she doesn’t have anything else to wear and that I don’t get to police what she’s wearing.

I told her that judging by the amount of dirty clothes on her floor and in her closet, she clearly has other options, she just didn’t plan ahead enough to figure something out. I told her it was disrespectful to her cousin, the bride, to wear something to revealing and tacky to their wedding.

Jill called me a jerk and said no one is going to care what she’s wearing and if people focus on her clothes more than the bride, that’s their problem, not hers. I told her in that case, how she is getting to the wedding is her problem, not mine.

She asked what that meant and I told her that if that’s what she wants to wear, she is going to have to find her own way to the wedding because I am not going to arrive with my daughter looking like she is about to hit a club at 2am instead of attend her cousin’s wedding.

My wife chimed in at this point and told us both to calm down. She told me I was being over-bearing, but also told Jill that she did not agree with her choice of attire either and reminded her this is a semi-formal event. She told Jill she would help her find a different option that would be better suited for this.

Jill scoffed at that and went to her room and closed the door. I went and knocked and told her she has 15-minutes to be ready or we are leaving without her. She yelled at me that I was being an a**hole so I went outside to wait and after 20 minutes I went inside and Jill was still in her room. I told my wife that I am leaving and she can either come with me now, or her and Jill can figure out their own plans.

My wife asked what Jill is supposed to do and I said she can take an Uber for all I care at this point. My wife reluctantly left with me and I could tell she felt guilty about the whole thing.

Jill ended up not coming to the wedding and both her and my wife blame me for it. I don’t think I was the a**hole here though.”

Wow…and here’s what Reddit users had to say about this.

This reader said that this guy was not the a**hole. 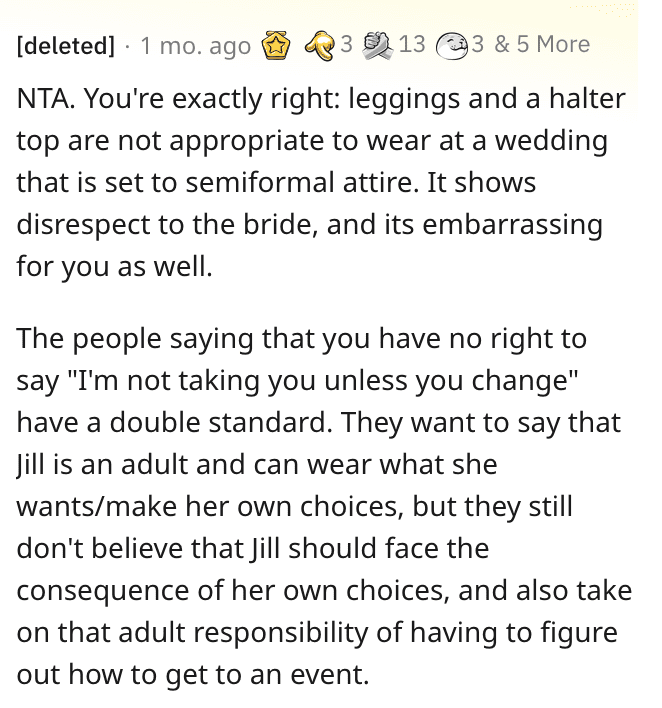 And another Reddit user agreed that a 19-year-old should probably know how to dress for a wedding. 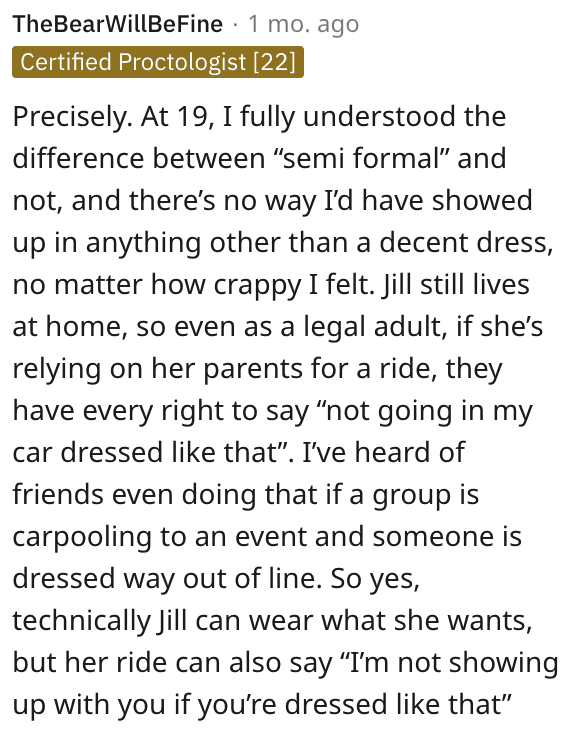 Another individual said that the daughter’s outfit was totally inappropriate for the occasion. 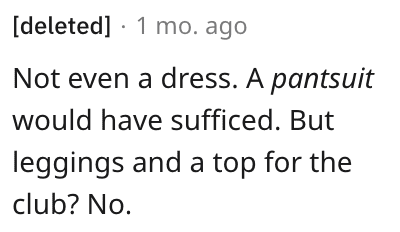 Tell us what YOU think about this story.