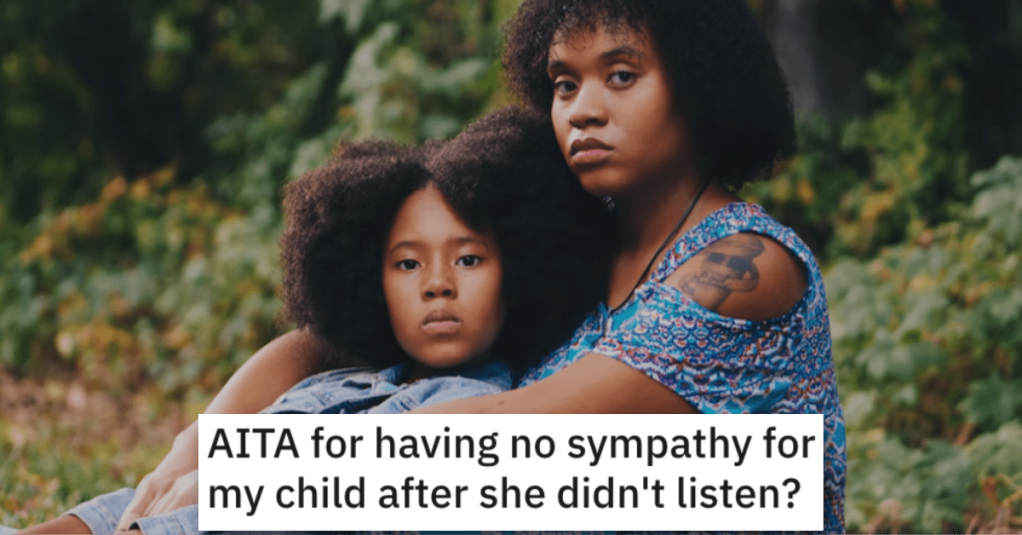 This Mom Had No Sympathy for Her Daughter When She Wouldn’t Listen. Is She Wrong?

I guess if kids aren’t going to listen, they just need to learn things the hard way, right?

Well, at least that’s how this mom felt when it came to her 10-year-old daughter.

Take a look at the story below and see if you think she acted like an a**hole.

AITA for having no sympathy for my child after she didn’t listen?

“My 10 year old daughter wanted bangs for a long time because a friend of her’s recently had her hair cut and had bangs cut and it ended up being very cute.

My daughter has beautiful hair, it’s very long, but it’s thin. I had my cousin, who is a hairdresser who actually has an area of focus on kids haircuts, consult and she said that if we cut bangs into my daughter’s hair it wouldn’t look right due to how thin her hair is.

I normally let my daughter have a say in the choices she makes regarding clothes and hair but on this one I put my foot down because I know it won’t look good and she is going to wind up unhappy. My cousin also uploaded a photo of my daughter to FaceApp and showed me what she would look like with bangs and it just wasn’t a good look (I know FaceApp isn’t 100% accurate but it was pretty close in this regard).

Day before yesterday my daughter told me she was going to take some alone time in our bathroom. It was only after she’d been in the bathroom a while that I noticed the scissors I keep in the kitchen were missing. These are big meat scissors. And then I heard her in the bathroom crying so I made her open the door and she was hunkered with her back to me, sobbing, and I saw a hunk of hair in the sink.

She had watched a TikTok compilation of people cutting their hair and tried to do bangs! It was not good results. The hair doesn’t lay flat, she cut very unevenly, and she cut too short (using your index finger place the tip in the center part and go down to the first bend and that’s how short she cut).

I really didn’t know what to say so I made sure hadn’t hurt herself with the scissors, which she didn’t. I looked at her hair, realized I wasn’t going to be able to even it up myself, so I called my cousin, who came over and made the cut even but it required cutting shorter, and now her hair is f**ked up.

My daughter is mortified and doesn’t want to go into public now. She keeps begging me to fix it even though I’ve explained to her, and my cousin explained it can’t be fixed. So I told her, “this is what happens when you don’t listen. You made the mistake yourself. You hid in the bathroom because you knew it was wrong. You have to live with the consequences and wait for it to grow.”

My husband says I’m being very cold and unsympathetic and that our daughter is 10, she didn’t know any better, she was just learning and doing what kids do. I feel that she knew exactly what she was doing and that it was wrong, hence her hiding from me.

My husband said that if I had just taken her to the salon and had her hair cut then she wouldn’t have done it herself. My daughter h**es the bangs, says my cousin was right that it wouldn’t look good so if I had taken her to get it done then she’d be blaming me. We’re at a stalemate.

This reader said she’s NTA and that her hair will grow back. 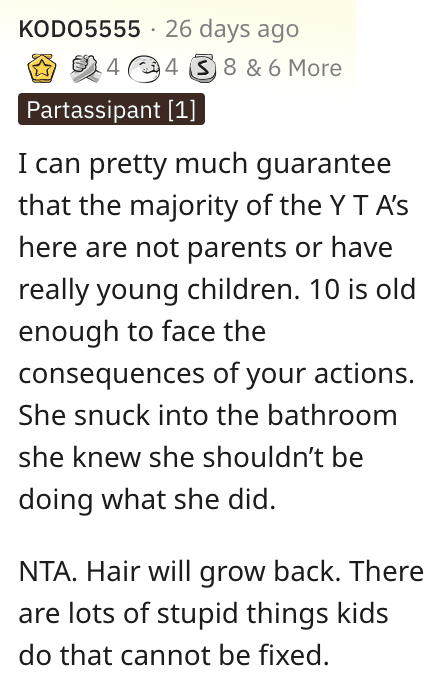 And this Reddit user said this mom is an a**hole and that she needs to learn to pick her battles. 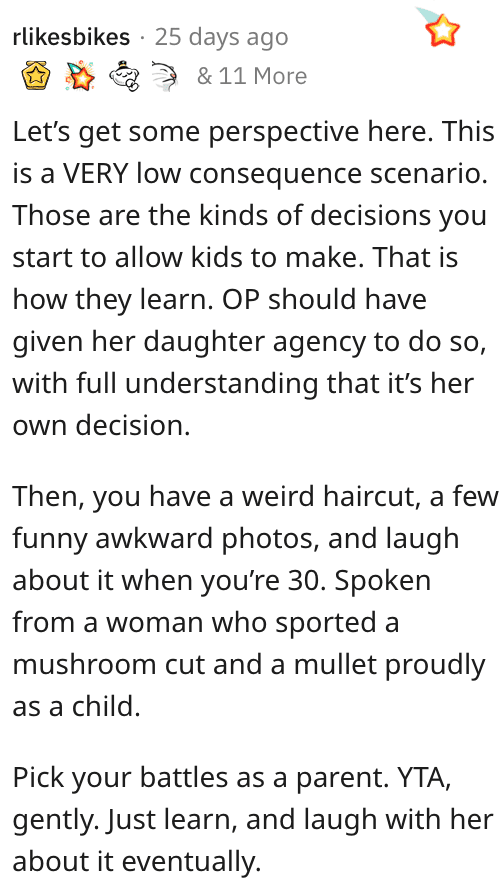 Another individual also said she’s an a**hole and that her daughter didn’t even learn her lesson. 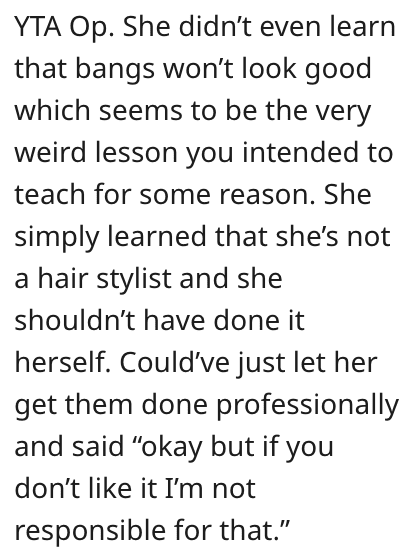