This Mom Told Her Kids to Borrow Money From Their Sister Instead of From Her. Is She Wrong?

What are you asking me for?!?!

I don’t have any money!

It sounds like that’s basically what this woman is thinking when it comes to her kids asking her for money.

AITA for telling my kids to borrow money from their sister, not me?

Carmen and Michael are both lower middle class. Carmen is a single mom of 2 and works as a nurse. Michael and his wife are teachers and are expecting their first child. Carmen makes $100k Michael and his wife make a little over $100k combined and we live in California near the Bay Area, where 100k is considered low income.

Elisa is a nanny for an extremely rich family. I don’t know if she’s considered live in because she lives in a separate house but on the same property. She makes $250k per year plus bonuses, doesn’t pay for rent or utilities, rarely buys groceries because she always eats with the family, they bought her a brand new car, they pay for her gas, maintenance, all of her medical, dental, vision, etc. is 100% paid for by the family.

Hell, they even pay for her gym membership and her vacations. She’s worked for them for 2 years now and recently bought a rental building in cash. Needless to say, she’s doing very well for herself.

Michael and Andrew just asked me for money. Michael needs $30k for part of a down payment for a townhouse and Andrew wants $10k so he could graduate with no debt. I told them to ask Elisa for money, not me, and that she could easily afford to help them out.

Elisa called me the other day asking what I said to her brothers because now they’re both asking her for money. I told her what I told them and she yelled at me for “volunteering” her to help with her brothers’ expenses. I told her that I never said she would help them, I just said that she easily could.

She said she doesn’t feel comfortable loaning money to family because she doesn’t want to risk their relationship if they don’t pay her back. I told her it shouldn’t be a big deal if they don’t pay her back because we know her Christmas bonus will be close to double what her brothers want, plus if she says no she could potentially risk her relationship with her brothers because she can afford it.

She hung up on me and hasn’t spoken to me since then so I wanted to know if I was the a**hole.”

This person said she’s NTA and that it sounds like she holds her daughter’s success against her.

Another individual agreed in a major way. 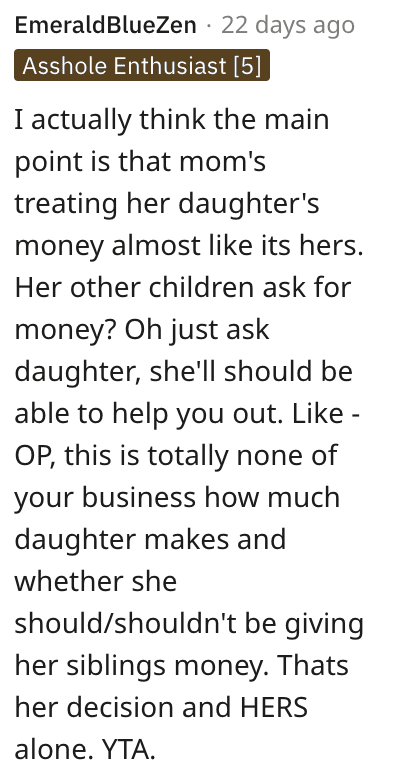 And this Reddit user brought up a good point: she never even said if she could afford it or not…