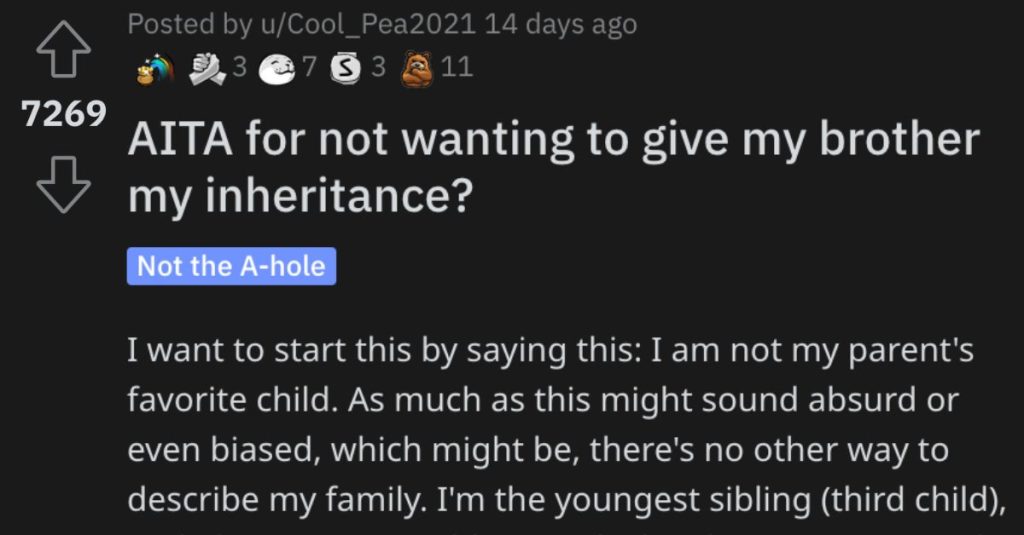 This Person Doesn’t Want to Share Their Inheritance With Their Brother. Are They Wrong?

We get a lot of these stories from Reddit’s “Am I the A**hole?” page, but this one has a bit of a twist that you probably won’t see coming.

Read on to see what happened and to check out how Reddit users reacted to this story.

AITA for not wanting to give my brother my inheritance?

“I want to start this by saying this: I am not my parent’s favorite child.

As much as this might sound absurd or even biased, which might be, there’s no other way to describe my family. I’m the youngest sibling (third child), and I have a sister (oldest) and a brother. My sister and my brother are just a bit older than me, at 23 and 21, while I just turned 18 last August.

Throughout my life, I’ve always known my parents didn’t particularly like me. They would treat my siblings a lot better, give them better clothes & gifts, and even gave them allowances. I was never treated badly, but I was never given anything like that. To be honest, I don’t even remember the last time my parents gave me a gift for my birthday, or even congratulated me for that matter.

This was the reason I started “working” as a part-timer since I turned 13 (washing cars, cutting grass, washing drive-ways, etc.). That’s how I managed to have some money should I need or buy things I wanted.

For example, while my parents gave my siblings laptops once they got to high-school, I needed to buy my own. Which is fine, they don’t need to give me anything, I’m not entitled to it. It just made me very self-conscious about myself.

Now, to the main point: my grandfather was a very kind man, and when he passed away, he left in his will (I’m not really sure about how this works, as I know almost nothing about the law), inheritances for his grandchildren (my siblings and myself), to finance our studies (College/Housing/Etc). As I understand, this money would only be possible to be used after the person is 18.

Now, my sister went to college and is almost graduating. My brother, however, has changed his course four times in the last two years, and every time he did that, there was a large cost associated with it, especially since he aimed for expensive colleges. Now, he has spent a large part of his inheritance and probably won’t be able to finance any course to the end.

I told them it was absurd, and it wasn’t my fault that he wasted his part of the inheritance. Their answer was, “He’s your brother, and he needs help! He’ll help you pay for your studies once he graduates.”. That means I would need to postpone college for at least 4-5 years. I obviously don’t want to do that, and told my parents that It was my decision.

As you would assume, they didn’t take that lightly. They’ve taken to call me an ungrateful child and an a**hole for not “thinking about family”. I’m constantly being shunned in my house, to the point that’s making me feel like a trash of a person.

Let’s see what people on Reddit had to say about this.

This reader said that they think the brother wouldn’t ever help this person out, so why should they? 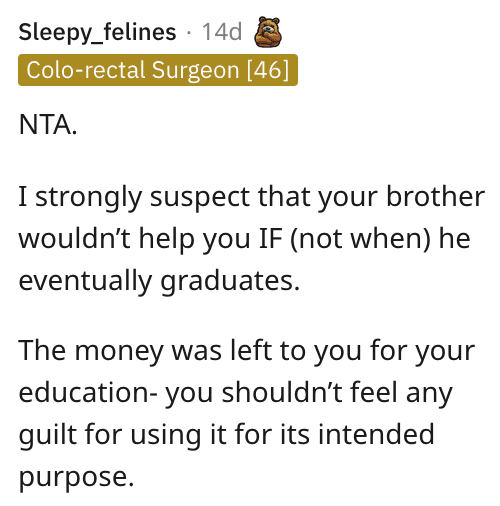 Another individual said that this money belongs to them, plain and simple. 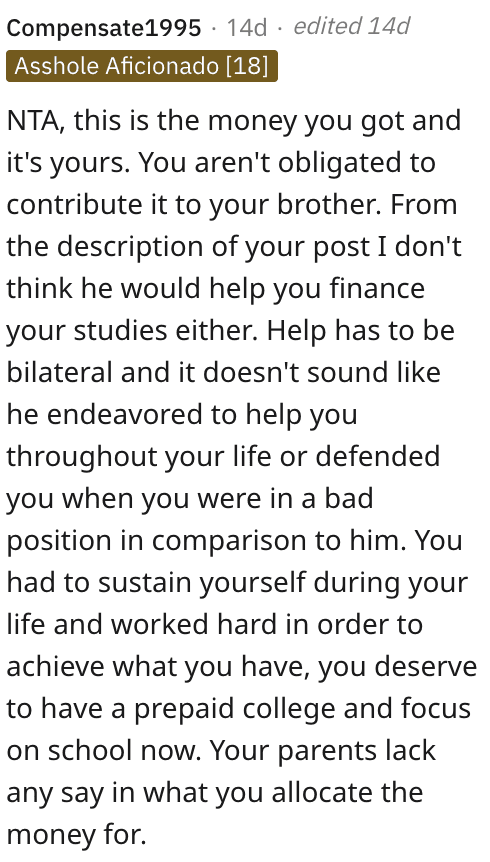 One Reddit user said that the brother needs to be put on blast. 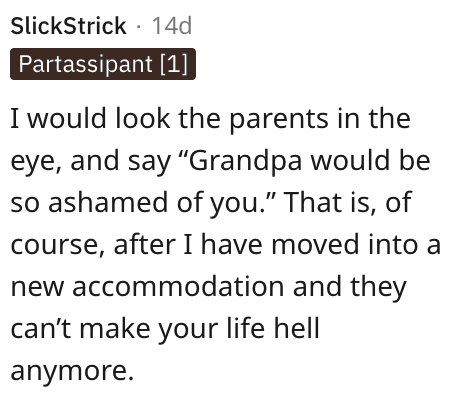 And this Reddit user said that this person needs to switch their accounts and move their money around so it can’t be messed with by their family. 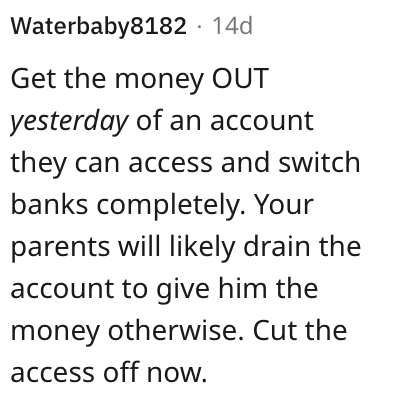 Do you think this person acted like an a**hole?