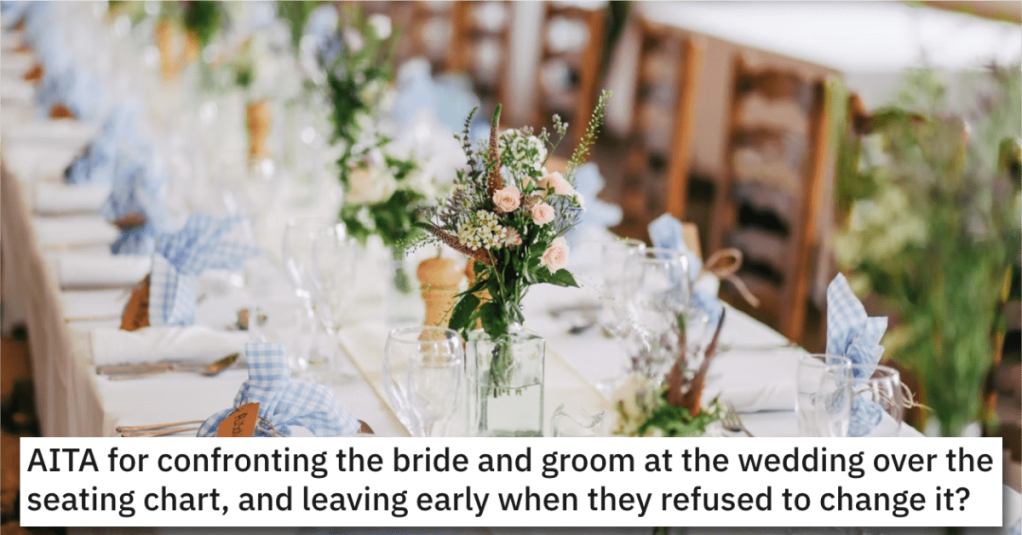 This Person Left a Wedding Because of the Seating Chart. Are They a Jerk?

Have you ever left a wedding because you didn’t get the seat you wanted?

Of course, you haven’t!

Well…the person you’re about to meet did and now they want to know if they acted like a total jerk.

Read on to get the full story…

AITA for confronting the bride and groom at the wedding over the seating chart, and leaving early when they refused to change it?

“My FIL got married a few weeks ago, but they just returned from their honeymoon, and I’ve heard through the grapevine that they think i am an a**hole.

At the wedding we were put at the same table as my husband’s mom, who we have not spoken to in three years. There was never a formal big no contact, she just stopped answering messages and stopped reaching out. My husband checked her social media once to make sure she was alive. She was alive and well, so we felt like fine if she wants to ignore us the relationship can just be over.

We haven’t heard from her since, she hasn’t met the baby, and it was sad for my husband for a little while, but he is over it. We expected her to be at the wedding but were surprised that she was seated next to us because FIL knows about the estrangement. MIL looked uncomfortable for a little while, but relaxed and was just ignoring us, but I could tell how uncomfortable my husband was.

I went up to the head table and asked FIL and the bride why we were next to MIL (I did congratulate them first) FIL looked like he was trying really hard not to smile and said to ask the bride, she did the seating chart. She said it is just normal to put people with people they know.

I asked if we could be moved because she was making my husband so uncomfortable. FIL asked what she was doing and I admitted nothing, and he told us to leave him alone and stop bothering them at their wedding.

I went back to the table. At this point my husband isn’t even eating because he is stressed and MIL is twisted all the way around in her chair so she doesn’t have to look at us and I just snapped and told my husband that we shouldn’t stay when we have been disrespected and if his dad wanted us there he wouldn’t have put us at that table.

MIL’s husband was like you know we can hear you a**holes, but I ignored him and asked my husband if he wanted to leave. He agreed and we went, but I heard that FIL and his wife were talking bad about us to MIL after we left and saying we are selfish, and MIL said we are hypocrites because we didn’t care about her happiness at our wedding (I don’t know what she meant by that).”

Wow…now check out what Reddit users said about this. 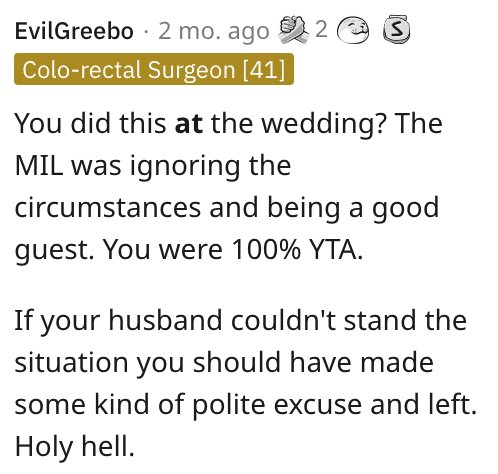 But this person had a different take on the situation… 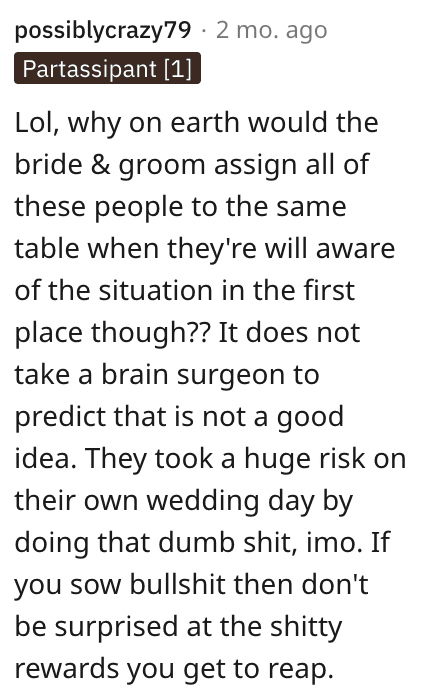 And this individual asked a very good question…I’d like to know this, too. 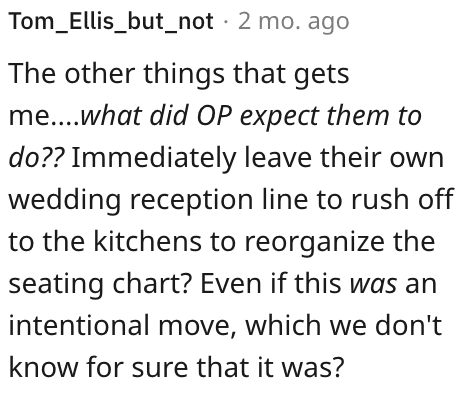