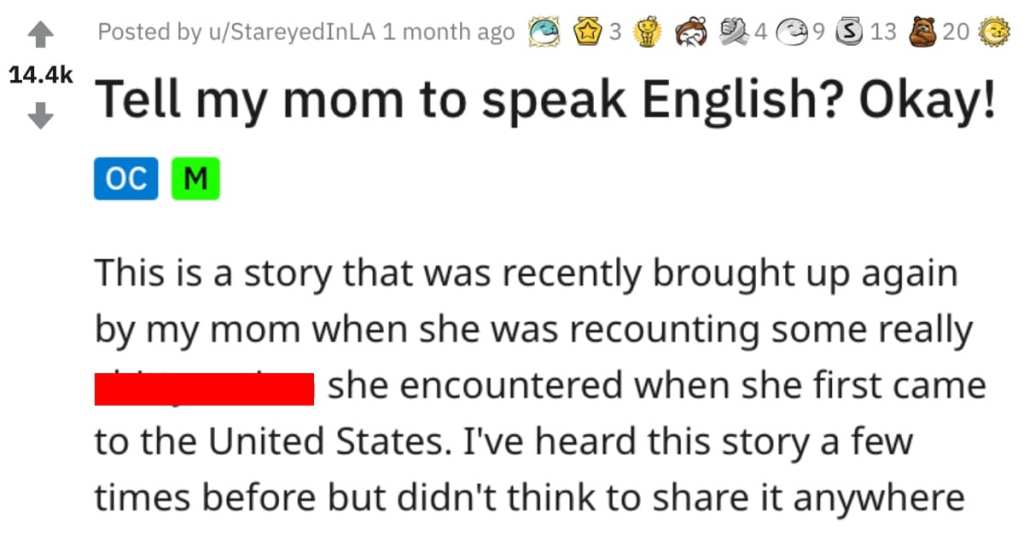 Do you love a good revenge story?

Well, you’re in the right places, guys and gals!

Because a Reddit user told a story that happened to their mother when they first came to the U.S. and it’s pretty interesting.

“This is a story that was recently brought up again by my mom when she was recounting some really sh**ty r**ism she encountered when she first came to the United States.

I’ve heard this story a few times before but didn’t think to share it anywhere else. That is until I was made aware of this subreddit. Enjoy.

It was the late 1980s in Los Angeles, California. By this time my mom, a Japanese immigrant, had been living in the United States for ten years. Although she could speak English well, she wasn’t fluent and preferred to speak Japanese with others from the local Japanese-American community.

One day, she and a friend were waiting to be seated at a restaurant on Beverly Boulevard. As they chattered away in Japanese, a large shadow cast down upon them. Looking up, they found Karen’s 1989 counterpart leering down at them.

Mom couldn’t remember how the woman looked except for the look of pure contempt trying to work its way across facial muscles frozen by Botox.

“You two,” Karen barked, “this is America! Speak English.”

Startled, my mom and her friend made eye contact, unsure of what to do. Encounters like this were, sadly, ones they had run into many times since they came to live in the USA. They were not ones for confrontation.

Before, they couldn’t do anything while their bullies marched off, unpunished. But then, as they made eye contact, a brilliant thing happened.

Mom likened the moment to their thought processes coming in sync together. They had a shared idea that didn’t need any further elaboration or explanation.

“Masami, my dear, I do think the waiter ought to have shown up to escort us to our table by now,” Mom chimed in the poshest British accent she could muster. “It’s frightfully rude to keep us waiting like this!”

“Yes, darling,” her friend replied, invoking her best impersonation of the Princess of Wales, “it is frightfully rude indeed!”

As they continued to twitter away in their fake English accents, Karen began to slowly back away. Her Botox face reddened and twisted itself in a visage as hideous as the Furies.

Realizing that she had just been outsmarted by two young women obsessed with British culture and celebrity, all she could do was storm off down Beverly Boulevard a defeated bully.

While there was no direct punishment, it was a story that my mom would continue to retell thirty years later. It has always made me chuckle to myself, and I hope you enjoyed it too.”

We did enjoy it! Let’s see how folks on Reddit reacted.

This reader said that, sadly, not much has really changed in regard to this kind of attitude among some Americans. 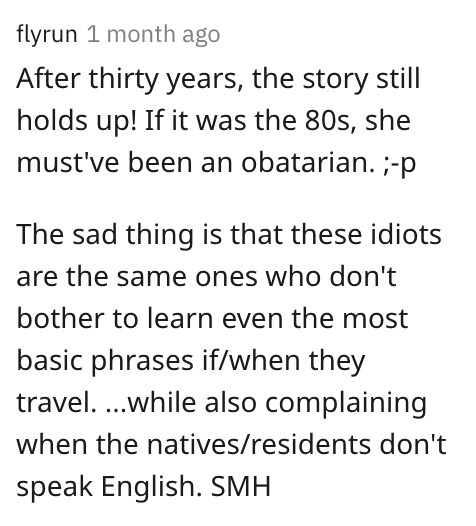 Another person could relate to people trying to correct their English and they shared their experience.

Have you ever tried to talk to someone from Glasgow before? The accents are wild! 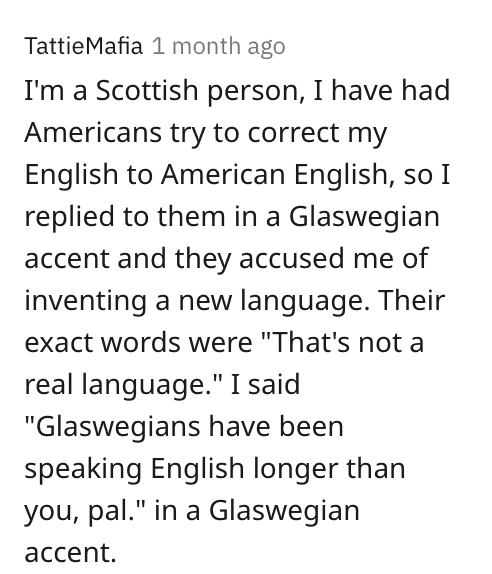 And another Reddit user had a bit of a different experience, but in some ways it’s similar because it deals with something we all need to fight against: IGNORANCE. 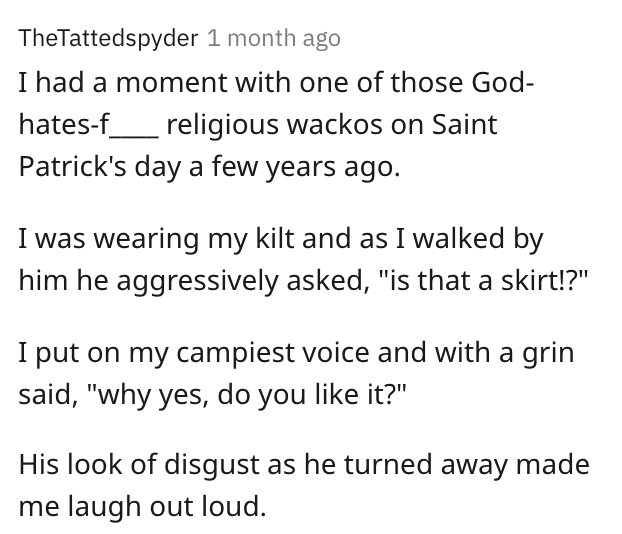 You gotta love it!

If so, tell us your stories in the comments. Thanks!