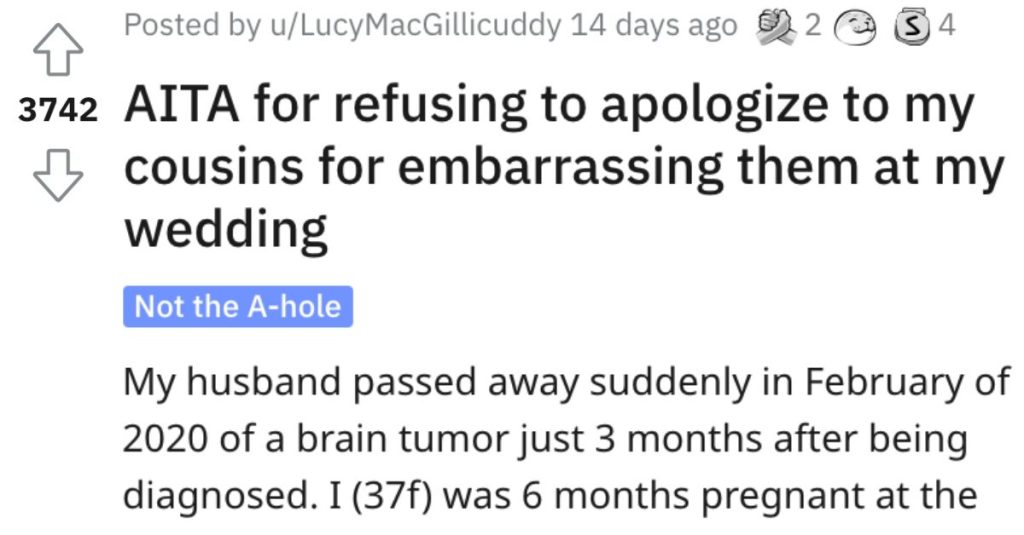 Weddings are constantly the setting for all kinds of dramatic stories.

Take a look at this one and see for yourself if you think this person acted like a jerk.

AITA for refusing to apologize to my cousins for embarrassing them at my wedding?

“Posting at the suggestion of my sister. Also, long story short.

My husband passed away suddenly in February of 2020 of a brain tumor just 3 months after being diagnosed. I (37f) was 6 months pregnant at the time with our first child and was a complete train wreck and couldn’t function.

My parents and in laws made the executive decision to move me back to my very small home town, which was 600 miles from where my husband and I were living. Its been good, I work remote and my parents are retired so they can watch my baby while I work.

A lot of extended family (including 2 cousins I grew up with) and friends still live here and have been super supportive. I developed a friendship with a guy across the street named Josh (27M) and earlier this year our friendship turned romantic.

We kept it quiet because I felt guilty over dating just a year after my husband d**d. We got engaged in July and announced our relationship and everyone (including my cousins) expressed how happy they were for us.

Well, a couple of weeks before our wedding, I went to my Aunt’s home (the mother of my cousins) and she asked who was coming to the wedding. I ran through the short guest list and mentioned her daughters. She had a strong reaction and said “Do not invite those two. They are a couple of miserable b**ches.”

I was pretty shocked, and asked why and she just said “Don’t do it, you don’t want them there, trust me.” So, I called her son and asked him what in the hell was going on. Apparently, these cousins that were just so happy for Josh and me had been completely raking us behind our backs.

Saying things like I must not have loved my first husband if I moved on with Josh so quick, and that he must just be interested in me for the life insurance money ($40k) because why else would he want me, and that he would just end up dumping me for someone younger since I am 11 years older than he is. I was really upset, and uninvited them from the wedding. They came over and apologized and tried to frame what they said as concern.

I told them I didn’t care to hear it and reiterated that they aren’t invited to the wedding. Well, they showed up anyway, and I asked my brother in law to escort them out. They made a huge scene and were very embarrassed that they were kicked out. They are now calling us a**holes for publicly shaming them when they say all they did was express concern over Josh’s intentions

. I say that it was none of their business and Josh had no reason to give them any pause, and has never done anything to make anyone question his intentions. They were just being mean because they are a couple of catty b**ches. But, they think I owe them an apology, I refuse.

So, AITA for embarrassing my cousins by having them kicked out of the wedding?”

Now let’s see what Reddit users said about this situation. 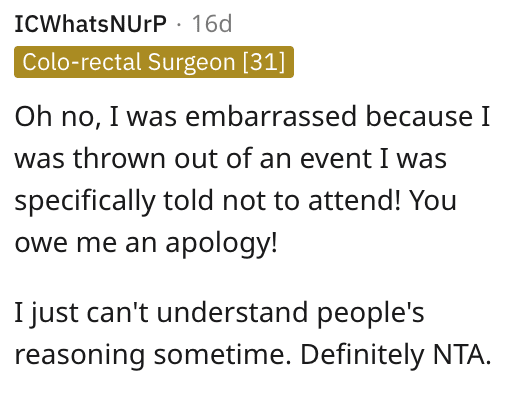 And this person said this woman did not act like an a**hole and these people WEREN’T INVITED. 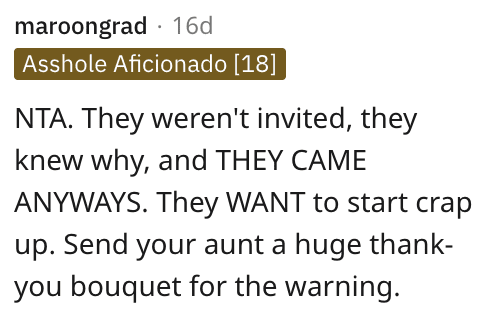 Another individual said that she shouldn’t apologize because these people need to be taught a lesson. 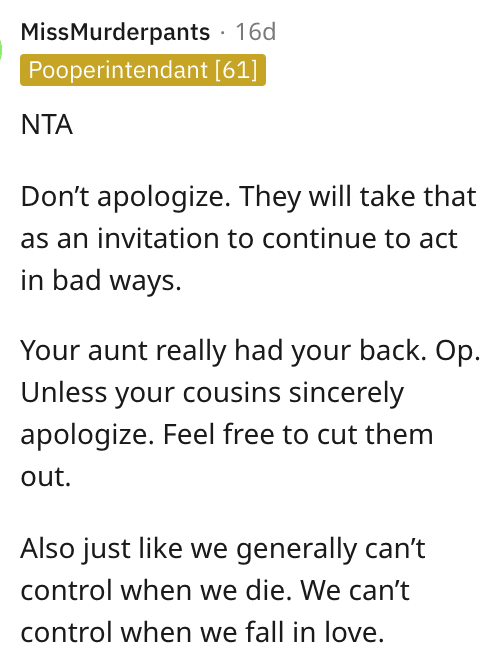 Finally, this person pointed to a study that most folks will find very interesting… 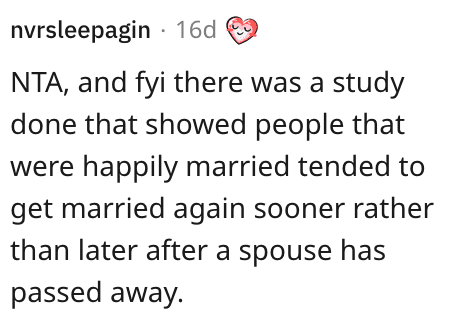 Let us know what you think about this story!