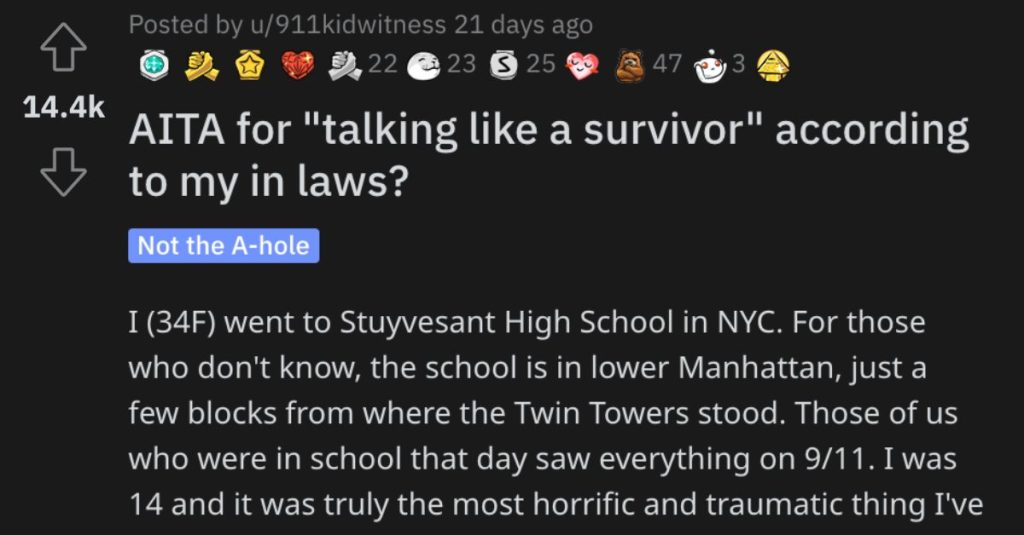 This Woman’s Family Called Her Out for “Talking Like a Survivor” After Her 9/11 Experience. Is She Wrong?

The events of 9/11 still loom large in our collective memory and you can only imagine what the trauma must be like for people who witnessed the events that day.

That’s why this story from a woman who was in New York City close to the World Trade Center on that fateful day is so puzzling.

Take a look at what she had to say when she shared her story to Reddit’s “Am I the A**hole?” page.

AITA for “talking like a survivor” according to my in laws?

“I (34F) went to Stuyvesant High School in NYC.

For those who don’t know, the school is in lower Manhattan, just a few blocks from where the Twin Towers stood. Those of us who were in school that day saw everything on 9/11. I was 14 and it was truly the most horrific and traumatic thing I’ve lived through.

I heard the first plane and saw the second plane crash. I saw the people jumping from the buildings (that’s what really still gives me nightmares to this day). I smelled the smoke, I heard the roar as the buildings came down. I and many of my former classmates still suffer health problems from having been in the area (and from having likely returned to the school building before it was really safe to do so).

As you can imagine, with the 20th anniversary approaching, I’ve had a lot of, well, feelings. I now live in a suburb of NYC, and was invited to speak at a local commemoration ceremony tomorrow. I also have been sharing my thoughts on social media.

My ILs (mainly my BIL, but MIL is backing him up) have been complaining about my posts. They say that I shouldn’t “talk like a survivor” because I wasn’t actually in either of the buildings and that I’m “making it about [my]self” and “taking away from actual survivors” and also that it’s just “over the top”.

I will grant that maybe it is a little over the top, but like, I still suffer both physically and mentally to this day. I was deeply impacted and forever changed, as were my classmates. You can’t witness something like that and not be. I wasn’t in the actual buildings, but I was right there and saw it all.

But I don’t know, maybe I can’t and shouldn’t consider myself a survivor? Maybe I should tone it down? My husband says I’m right, but that I know how his family is, they get very uncomfortable from emotional stuff and I should be more mindful of my posts.

So, AITA for talking about my 9/11 experience as (I think) a survivor?”

One reader said that anyone who was in New York that day was a survivor. 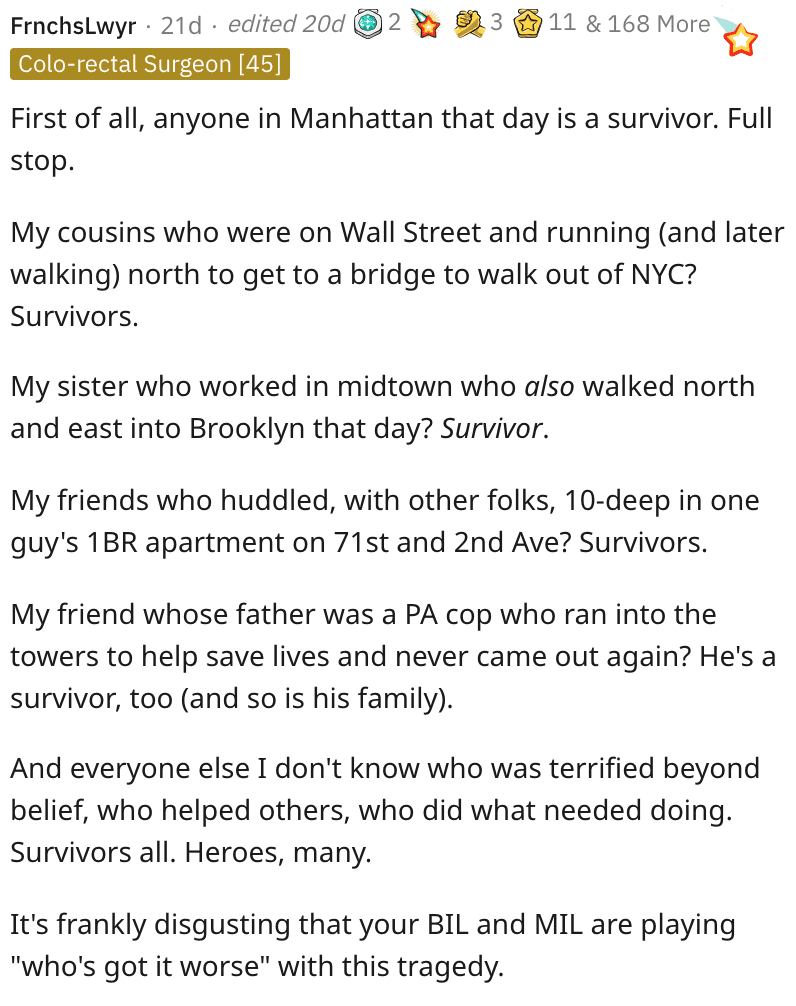 Another reader said this woman is not doing anything wrong and that they were affected by the tragedy all the way on the other side of the world. 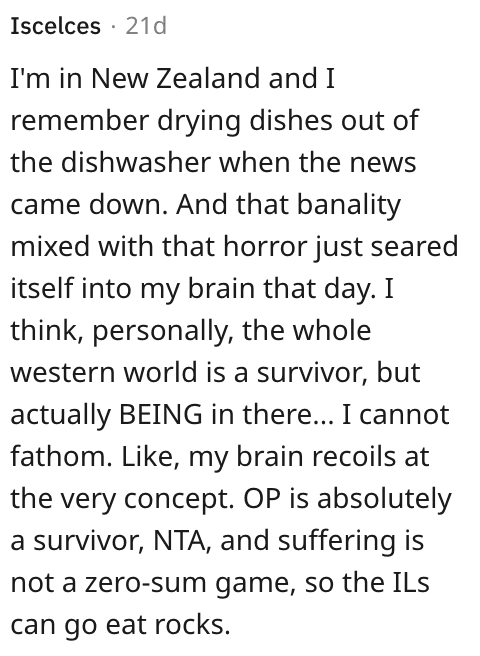 This individual said that anyone who was even ALIVE that day has some kind of trauma because of it. 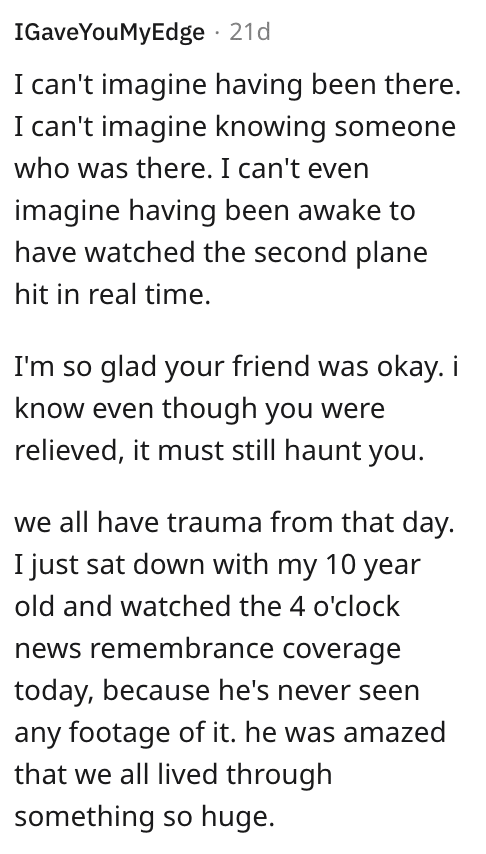 And finally, this reader also lived in New York at the time and they shared their thoughts about this situation. 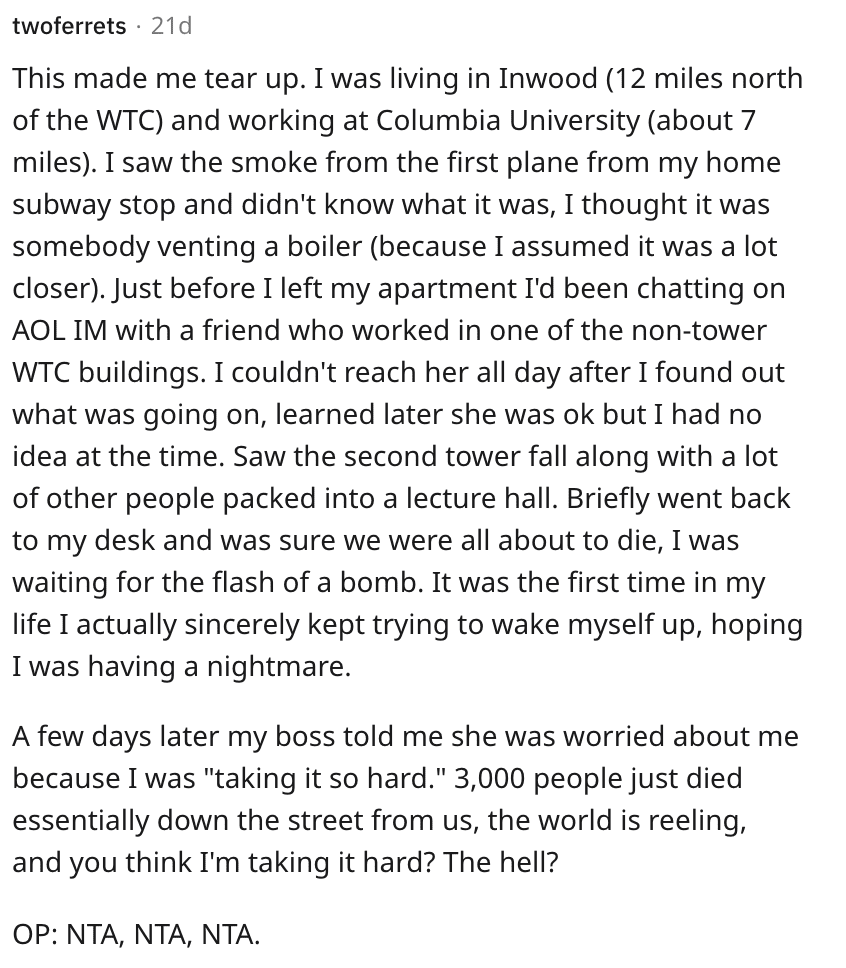 Do you think this woman is wrong?