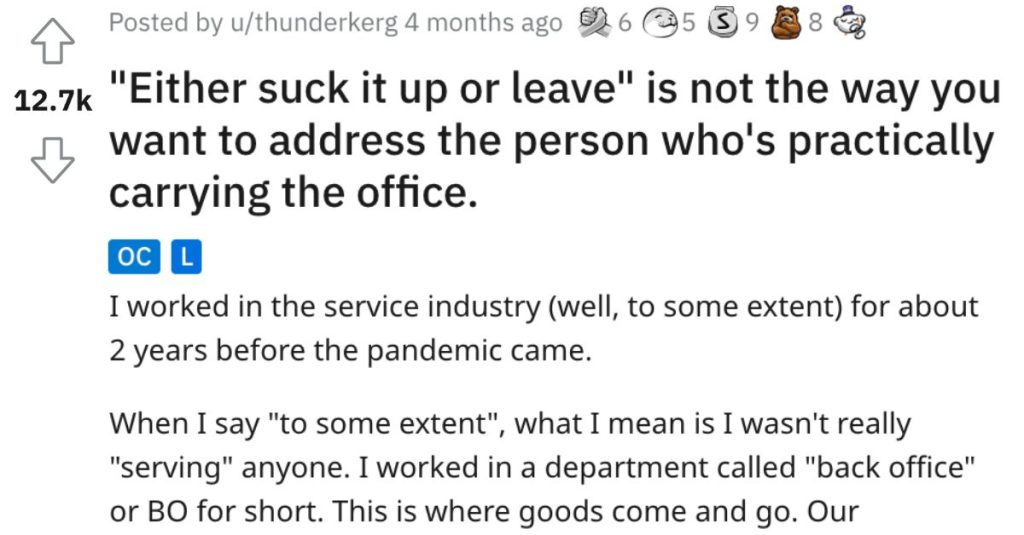 This Worker Was Told to “Suck It up or Leave”. So They Left.

Okay, whatever you say!

I’ve never actually done this in my life, but I’m hoping I can do it one day…my fingers are crossed!

But this person who shared their story was given an ultimatum on Reddit and they were happy to oblige. Take a look at what went down…

“Either suck it up or leave” is not the way you want to address the person who’s practically carrying the office.

“I worked in the service industry (well, to some extent) for about 2 years before the pandemic came.

When I say “to some extent”, what I mean is I wasn’t really “serving” anyone. I worked in a department called “back office” or BO for short. This is where goods come and go. Our department has 2 jobs: to “check” and to “input”, therefore we called them “Checker” and “Data”. The checker’s job is to make sure that all orders are eligible.

This included Quality and Quantity. After a checker has confirmed the order, the Data will then input the information regarding said order in the system, after which the merchandise is ours and will not be eligible for a return. Therefore our department was extremely important, the work was stressful and more often than not heavily supervised.

We used to have 8 people working at full capacity during the normal days and barely managed to get by. There were weeks when we had to work overtime almost every day just to get everything running in order.

Because of these overtime hours, we got paid more than other departments, nearly 30-40%. Of course, this sparked controversy. Other supervisors argued that we’re using our workload to exploit the company. Mine was having none of it.

There were audits, sessions, supervision from the higher office, and they found nothing. They even tried to bring in another crew from another store that’s closely related, they quit as a whole after 1 month. When we got back in control, we even requested more hours to cover the s**t that they had left behind.

Eventually, the store stopped trying to change us. Instead, they tried to limit our hours. We used to request 2 or 3 hours on busy days before, but then even when the store was practically buried under mountains of goods they only let us do 1, very rarely 2.

We tolerated it at first. Normally we would stay past the requested hours to see things done, not because we loved the job, god no, but because we’re responsible workers and if we didn’t finish the work that day there were chances we’d get consumed by the flow of goods the very next day. But it was usually 30 to 45 minutes of those extra, 1 hour top. When the change happened there are days we had to do 2 hours extra with no pay.

Yes, we should have said “f**k it” to their faces, but my supervisor asked us to stay and he’d try to fix things. He’s a super cool dude and because I liked him very much, I agreed. The others weren’t so cheerful, 3 left after a month, so we’re down to 5.

Our HC then was 3 Checkers, 1 Data, and the cool dude. Us checkers suffered, yes, but the Data was on the verge of collapsing. She would be the first to enter the office, and usually the last to leave. Her shift was 8 hours, but she worked 12 or more every day. More often than not 2 or 3 of them were unpaid. We tried to share the workload with her but we couldn’t even cover our own most of the days.

His objection to the work hours came to no avail. They were aware that we deserved those hours, so they simply ignore his request and response with something general. He’s pi**ed, it was July and the heat should not have come from the company as well. He requested a full audit, threatening to leave if things didn’t change. They basically told him to “Either suck it up or go home”. So he just left.

He’s the 3rd person they’ve hired in 3 years to manage that office, so they thought he’s just as disposable as the others. What they didn’t know was, he’s the only reason I and Miss. Data stayed, so when we knew what happened, we immediately noticed the HR that we’ll also be leaving.

They threatened us with penalties for unlawfully terminating our contracts because we hadn’t given them 2 weeks’ notice, but we laughed it off and reminded them that being the special department, the BO was given an extra 3 days off each year, which totaled in 15 days. Also, our contracts stated specifically that if someone quit, they could choose to either use their remaining days off and leave early or get them converted into payment.

They were so surprised when they found out that we all had our days off FULLY INTACT (it’s almost as if we had been too busy to use them or something, IDK), so they couldn’t do anything about it. We then left the office with everyone eyes shooting daggers.

Of course, everything plunged into chaos. Did I mention that we’re the most important department in the whole chain? Because we were, and they found it out the very, very hard way. The other 2 guys managed to last a week before also leaving, citing something like “total madness” or “absolutely out of control”. After they left, the store brought in a team of 10, but they couldn’t have covered half our work despite being twice in number.

Honestly, I didn’t care about it that much, but it’s not something that flew by. There were days when their store had nothing on the shelves, so people started to go to the other store in town to shop. When they got things back to somewhat normal, it was after 5 months and the damage had already been done. They closed last month and the place is now rented to some small business.

Not as interesting as some of these stories, I just thought about it when Cool Dude called me last week. We were still friends, I’m out of town but we kept in touch. Apparently, after the other 2 guys quit, they called him and tried to get him back to work, but he’s a free agent then and said he was gonna charged them twice for “consulting fees” (not sure if it’s a thing).

Also, he would only work with us, citing “familiarity to the environment” and if not then he’d do exactly as stated in the contract, which would be sitting around and ordering everyone to do their jobs (seriously, he’s supervisor, he didn’t have to do anything, he helped us because we’re head to toe in work and he’s a Cool Dude). He asked if they tried to contact me after that. They never did.

TL;DR: Store didn’t want to pay us for our much-deserved extra hours, ignored our request, and told us to “take it or leave it” when confronted. So we left it.”

And here’s how folks on Reddit reacted to this story.

One reader said that it’s not that uncommon that idiot managers take their best workers for granted. 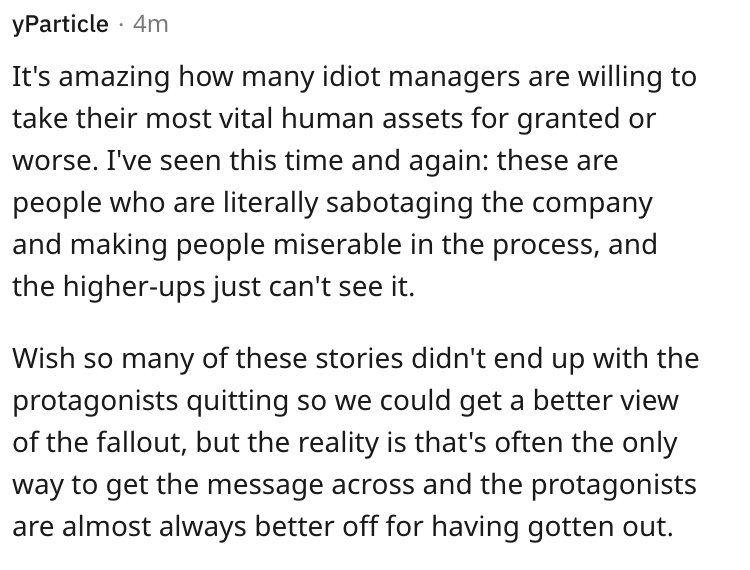 Another person had a personal experience with this kind of situation. 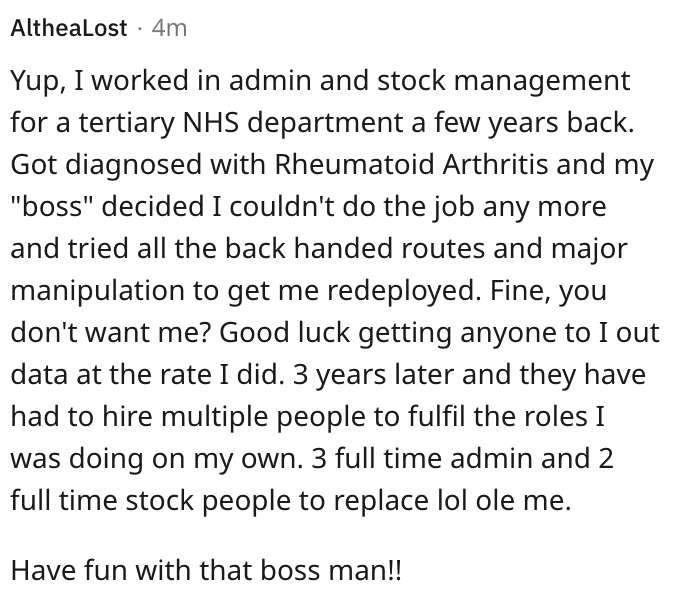 This Reddit user said that everything seems to revolve around cost-cutting and managers don’t think these things through. 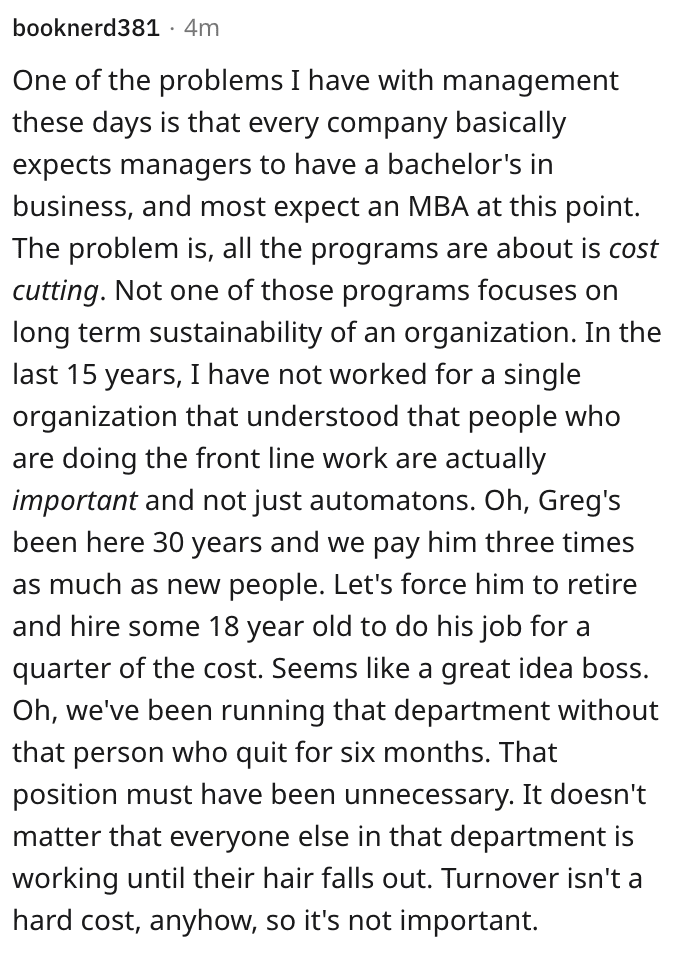 Finally, this reader said that a lot of people have a skewed interpretation of what work needs to be like and that’s led to these kinds of attitudes. 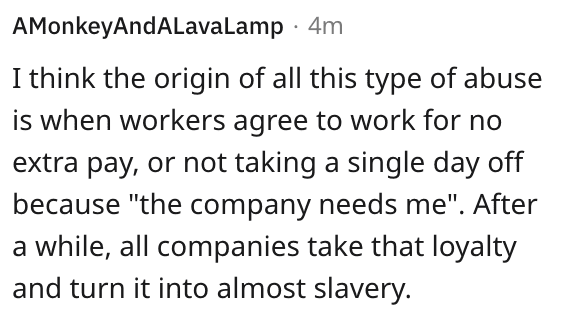