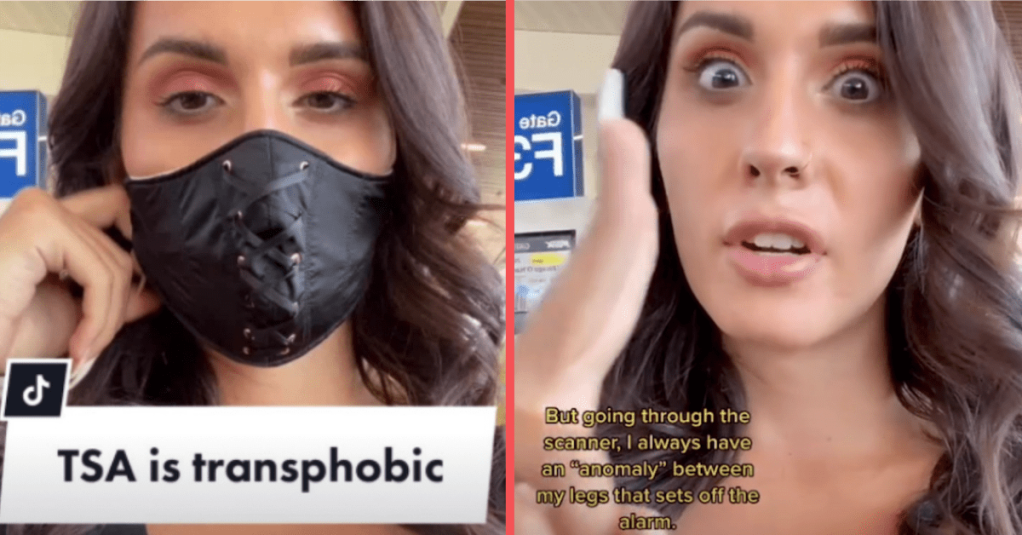 When I was a senior in high school, I had titanium rods put in my back.

About 6 months after the surgery, I traveled to Capitol Hill, and with the naiveity of a high school student, I was disappointed when the metal detectors didn’t go off.

Then 9/11 happened, and I became afraid to travel, though I was immensely relieved that I didn’t set off metal detectors, not in the U.S. or abroad.

Airport scanners have come a long way, though. Now they have those whole-body scanners that look for more than just metal.

It turned out fine, but it was terrifying in the moment.

And that’s what it can be like to fly EVERY TIME as a transgender person.

Recently, model Rose Montoya of Arizona was traveling from Phoenix to LA to visit her boyfriend, when she ran into trouble at the TSA checkpoint.

Rose is transgender, but fortunately her travel documents reflect her identity.

Unfortunately, for all their technology, the TSA equipment hasn’t quite caught up to the 21st century.

Did you know that the TSA personnel have to tell the machine whether each person passing through it is male or female? Because I had no idea.

I wonder how often they get it wrong, even for CIS people.

After setting off the scanner three times, both on the male setting and the female setting, and being patted down, Rose was finally allowed to continue on her journey, and she paused to record a quick video for TikTok condemning the indignity of it all:

When a commenter responded to her story with a deliberately provocative question about her gender identity, Rose didn’t back down.

She answered the question honestly on behalf of trans people everywhere, explaining how difficult it can be state-to-state to get your identification documents changed to match your gender.

In a later follow-up video, Rose explained that she’d been asked how TSA could do better.

Her answer was to stop worrying about gender so much, when most of the time, a person’s gender really doesn’t matter, and trying to force a binary is the root of the problem, not just with TSA but with so much of society.

To their credit, TSA was one of the groups that reached out to Rose about how they could do better themselves.

Rose recorded all of the questions and comments she had for them in a subsequent video.

It’s terrible that she had, not one, but many awful experiences traveling. But it’s so encouraging that her video has gone viral and sparked a conversation and the potential for change.

What do you think are some ways that this kind of situation could be improved? Tell us in the comments.