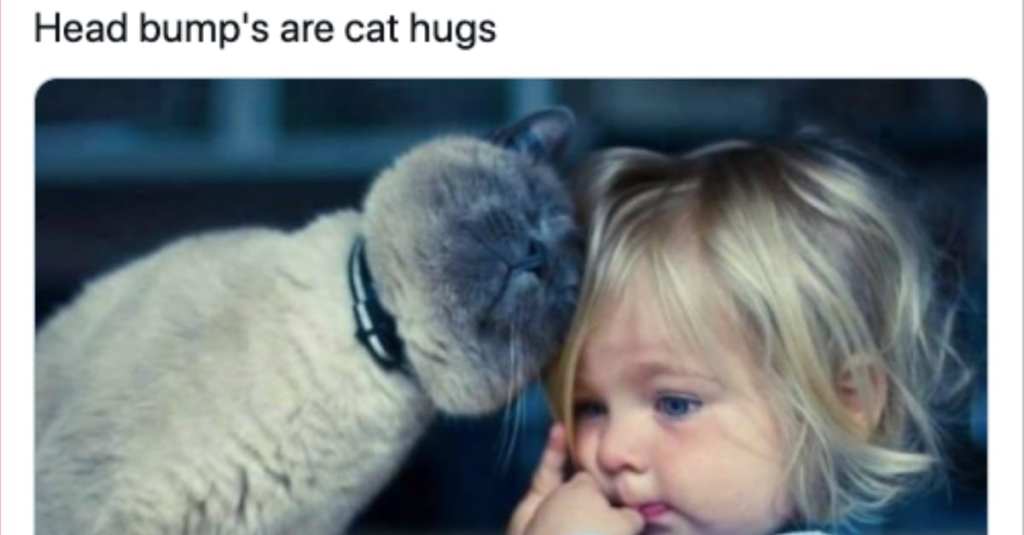 When I was a kid, my cat liked to lie on the upstairs landing with his head pressed against the railing of the staircase.

I still don’t know if that was normal or not, but there was never much about that cat that I thought was normal.

But oh, how I loved him.

Regardless of their behavior towards banister railings, it turns out that just like we like to boop their noses, many cats like to head bump their humans, booping us right back.

According to Mental Floss:

Cats have scent glands on their foreheads that release pheromones.

Since cats use scents to recognize friendly life forms, a cat rapping its head on yours transfers those pheromones to you, essentially signaling that you’re part of the pack.

And the technical term for the behavior is actually “head bunting.”

When I had to go to work in the morning, Hiro would come running up and start head bunting me in my dress pants. I think he knew I was leaving and he wanted to mark me before I left. pic.twitter.com/db7pACCxKz

It’s a sign of affection from your feline friend, whether they head bunt your head, or your arm or leg.

And they don’t have to use their forehead.

Cats have lots of different pheromone glands, and as The Spruce Pets explains:

They are located between the toes, beneath the chin, the corners of the mouth, the temples, along the length of the tail, and the ears.

Cats tend to use the entire head in sometimes luxurious rubbing displays.

It’s all still bunting behavior, whether the cat presses their forehead against you or rubs their whiskers all over you, which is the behavior I’m more familiar with.

While Greg is taking this picture Kitty is on my lap purring and head bunting my face. He's such a sweet boy. pic.twitter.com/072W9kUBMm

It may be quite common, but it’s still very special, and pet owners love it!

In that honor here are the top five best bunting pictures on Twitter right now.

It’s not just for house cats

Lions are kitties too.

It’s an expression of love

Between other felines, a feline and their human, or… a horse friend.

It’s a hug between friends

No matter the effort

After all, if they have to endure the cone, so should you.

Head-bump loving cats are the WORST when they have the cone of shame! pic.twitter.com/JcDxZeZysT

And sometimes, it’s a way to say ‘hi’

Like a fist bump without the danger of claws!

I don’t know about you, but this makes me miss having a cat to cuddle and be snubbed by.

What do you think about it? Tell us in the comments!