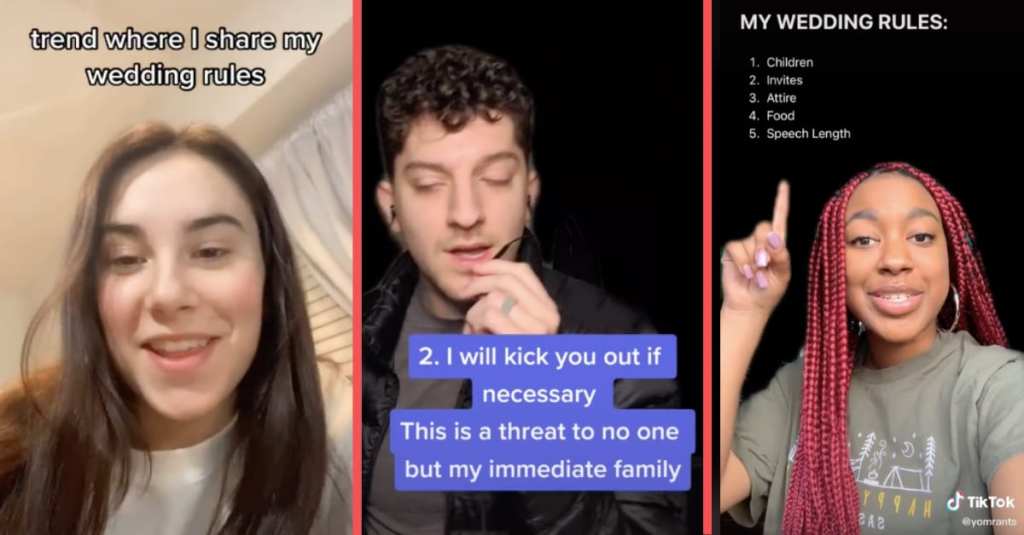 I’ll never forget the advice that a dear family friend gave on a wedding day.

I say “a” wedding day, because we attended so many together that I can’t remember if it was first said on MY wedding day, or a friend’s, but he said, “No matter what happens, at the end of the day you’ll be married, and that’s the whole point.”

It’s so true, and yet something that is easily lost in all the excitement and stress of wedding prep, and I have repeated it to friends myself.

Those words may stop a panic attack on the day, but they won’t necessarily stop most people from over-planning their perfect day, as evidenced by the recent TikTok trend #weddingrules where brides and grooms to be offered their list of rules, both silly and serious, for their special day.

This self-proclaimed Bridezilla offered a pretty standard list of rules that emerged as themes throughout the other videos.

yes I’m gonna be a bridezilla and no i don’t care because my wedding my way. #weddingrules #fyp #foryou

I didn’t know “Don’t wear white” needed to be said outside of Schitt’s Creek, but enough people listed it that apparently it does.

Even this girl who actually DID want kids at her wedding felt the need to say “no white.”

Personally, I can see it both ways, and I just think people shouldn’t be offended by the couple’s wishes.

It definitely wasn’t an across the board thing. Some people really do want kids at their wedding, especially if it’s kids that they know.

But “no random plus ones” definitely emerged as a theme.

In addition to the standard set of rules, there are other no-brainers like turn off your cell phone and don’t show up late.

And a lot of people also stressed that in addition to not wearing white OR the bridal colors, you weren’t allowed to wear jeans.

If I recall, I may have actually explicitly told my uncle he WAS allowed to wear jeans, although it was 105 degrees the day I got married, so I’m a little surprised no one showed up in shorts.

A distaste for the weird garter toss tradition was also pretty common, and individuals planned to avoid it for a variety of reasons.

Another theme that emerged was that people didn’t want long speeches and they especially didn’t want surprise announcements like other peoples’ engagements or pregnancies.

Again that just seems like common courtesy to me, but I guess sometimes it needs to be spelled out.

Unlike most people, this person doesn’t even want a bridal party.
(And she’s dead serious on the “no announcements” rule.)

I woke up and chose unhappy family #weddingrules #weddingplanning #newlyengaged

Some people had very specific criteria, like this girl, who wants a flower wall for pictures (very cool idea), a sick Air B and B in the mountains (nice), and guests’ attire to follow a color scheme (maybe too far).

Others responded to the viral hashtag, which has had over 61 million views, with silliness, like this guy who wants a One Direction themed wedding.

This one is pretty ridiculous, but I like where she’s going with her first rule.

All in all, I’m mostly just glad TikTok wasn’t around when I got married.

Personally, unlike some users, I think wedding is for your family, not for you, and personally, I think everyone would be a lot happier if they just eloped.

What about you? What’s on your ideal wedding ‘must’ list? Tell us in the comments.