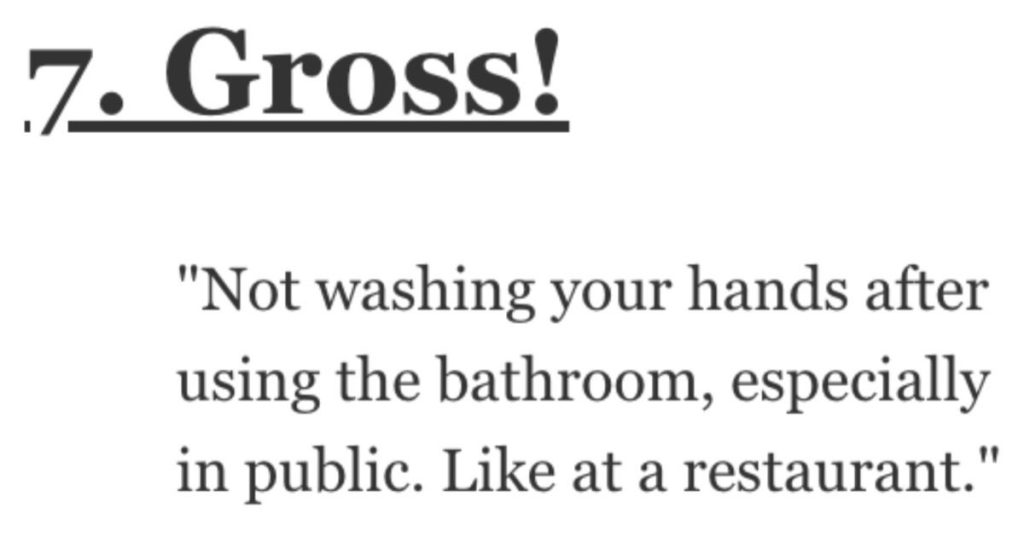 What Are the Most Disgusting Bad Habits? Here’s What People Said.

Boy, where do we start…?

Good thing it’s up to folks on AskReddit to answer this question and not me!

“Dog s**t (living in Holland) drives me crazy how much is just lying around.

Disguisting habit for dog owners to just not care to clean it up. Which is in fact mandatory but hey… if no one sees it, its not a crime.”

“People smoking while driving seem to almost always throw their c**arettes out the window without a care in the world.”

“Those people that have their phones on speaker ALL THE WAY UP casually talking on the train, in the grocery store, and in restaurants.”

I knew people who did that, safe to say I don’t anymore.”

“I was outside of CVS and this kid came out with a bag.

He pulled out the contents and just dropped the bag and left.”

“I once saw a person picking their ear and eating the wax.

That s**t’s even worse then picking and eating out of your nose.”

“Not washing your hands after using the bathroom, especially in public.

“Not brushing your teeth.

I have a room mate who I have not seen brush his teeth for legit 5 years. He also has not washed his blankets/bed sheets a single time last 5 years either.

Surprisingly he doesn’t noticeably smell from a distance which is good for me I guess. But the guy will stay single forever if he keeps that up.”

“Sneezing or coughing without covering your mouth.

My classmate did that once and it was so disgusting.”

“My dad has a habit of taking a bite and then proceeding to talk while he’s chewing. As opposed to chewing, swallowing, and then talking.

Ever since I was little, I would get irrationally upset at dinner, and couldn’t figure out why. It was the chewing and lip smacking sounds. When I finally explained it to my parents, they told me to just get over it.”

“People who chew tobacco walking around with a bottle full of their dark, cloudy, spit has got to be right up there.”

“Spitting. Some men in Ireland do it in the pavement. A guy once hacked a big one right infront of me when I was pregnant.

My gag reflex thanks to pregnancy left him with no doubts as to how gross he was. I’d be so disappointed if I caught one of my kids doing it.”

What do you think are the worst bad habits?