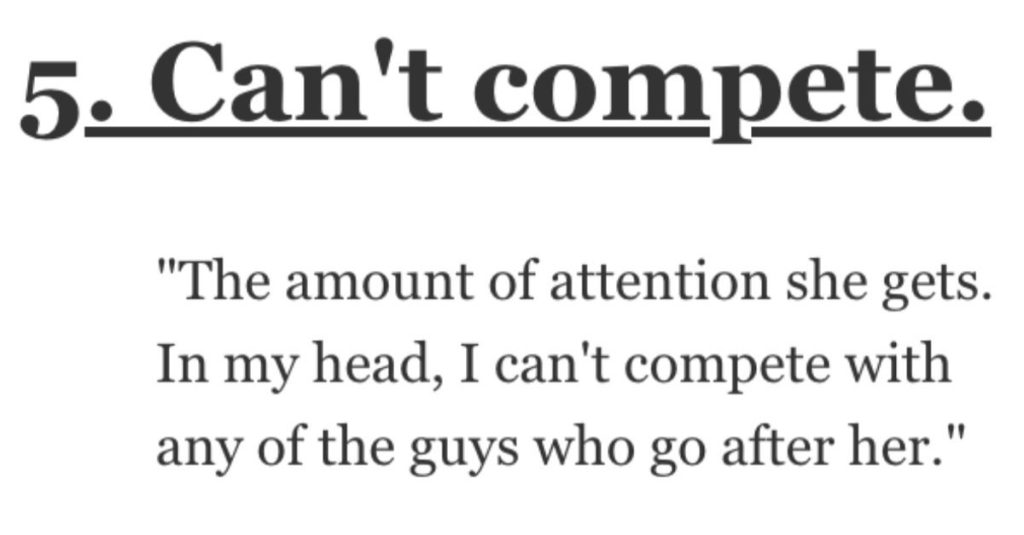 What Are You Insecure About in Relationships? Here’s What Guys Said.

Some men have a tough time admitting that they have insecurities about ANYTHING.

So you can imagine how hard it probably was for the guys you’re about to hear from to admit what makes them insecure in their relationships.

Take a look at what guys had to say on AskReddit.

“She’s such a better parent than I am. Between my temper and my size, both of my girls have this ‘don’t p**s off dad’ mentality.

It’s effective in the heat of the moment, but I watch her interacting with them, and I feel completely inadequate as a parent.”

“The fear of not continuing to make the money I do. Over time my life has become dependent on my income, but it’s rare to get paid the way I do.

So I genuinely fear not being able to find a job to keep my obligations in check.

And before you say that I could downsize my life, I did. I have no debt, but because my ex and I were married for so long, she gets about two-thirds of my paycheck. I’m legally obligated to pay her that.”

“I’m an athletic guy, but I’m constantly scared of not being able to protect them; if some 250-pound Muay Thai fighter disrespects or hurts her, then I have no idea what I’d ever do.”

I didn’t get renewed on a yearly contract and can’t get hired in my field. I have no motivation to do other things. I take care of the kids and homeschool them and do the shopping and most cooking.

I feel like I am free-loading. I hate sports and other guy stuff. I am scared of our upcoming move because it is taking away my backyard and its chores, my tools, and workshop, which are the last ‘male’ things I do.”

“The amount of attention she gets.

In my head, I can’t compete with any of the guys who go after her.

And I genuinely think she would not give me the time of day if she didn’t have a child I am great with.”

“I can accept breakups or divorces, but I wouldn’t want to be remembered as a bad boyfriend or a terrible husband by the way I treated them in the relationship.”

“Other men making her uncomfortable by flirting with her on a girl’s night out — or even worse — her liking it.

Just the fact that I only can know if she tells me, or somebody that I know sees it, makes me insecure.”

“D**ng young and having another man raise my children and f**k my wife.

It’s all the encouragement I need to live healthily.”

“One of my ex-girlfriends once told me I am too clingy.

Since then, I’ve always been afraid that I annoy my partner.”

“That I’ll be made fun of if I’m vulnerable.

It’s happened before, and it’s hard to really trust like that again.

You wonder, Will this be held against me? Whether it’s teasing, in a fight, or if she’ll tell her friends.”

“That I am not good enough, in any sense of the word, and that my partner is ‘just settling’ because I’m stable.

Can’t help but feel sometimes they’re just waiting for something better to come along, ya know?”