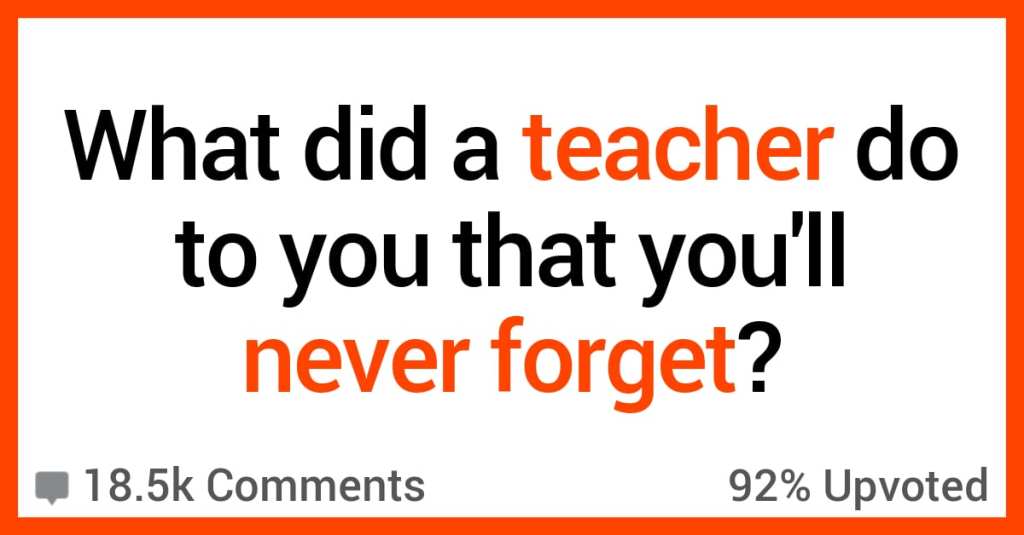 What Did a Teacher Do to You That You’ll Never Forget? Let’s See What People Said.

If you happen to stick it out and graduate from high school, you’re going to have many teachers during that run.

But one thing is for sure: there will always be that ONE teacher who did something that affected you that you’ll never forget.

“When I was in third grade the teacher of my gifted program class (extra class we were pulled from mainstream to do a few hours a week) started berating me over raising my hand too quickly to answer questions saying I needed to think longer and give others the chance to answer.

She went on and on about how I had an attitude. I got upset and she made me stand in front of the class when I started to cry. “I know you’re crying and I don’t care”. It was my birthday.

It was a class of about 8 students. One guy told me in high school that that day was one of his clearest memories from elementary school.”

“I called somebody stupid once when they got a question wrong and the teacher instantly made me stand up and spell “stupid” backwards.

Got it wrong with the pressure and learned a lesson that day.”

“This teacher was extremely strict HATED by my class, but loved me because I was one of the few who respected her and did well in her class.

When school ended, she gave me a crystal bear. Nothing too fancy or expensive, but I felt as if I was glowing leaving that classroom with bear in my hand. I still have it and will treasure it forever.”

“I was anorexic when I was in school.

A teacher took me aside after class and told me that if I didn’t stop doing what I was doing to myself I was going to die. That my body was going to start shutting down, my organs would fail, that it would not be beautiful and I was going to die an awful and painful death.

I still catch myself slipping back into that mindset ten years later sometimes. But I will never forget that. She saved my life.”

“I had just gotten out of an emotionally abusive relationship around 16 and was worried about my ex hurting herself (abuse really f*cks up your mind), so I confided in my English teacher.

I’m Facebook friends with the teacher and want to buy him a beer once COVID is under control.”

“I broke up with my boyfriend the night before my final and as I was walking to class to take it, my teacher seeing me, told me that I could take it the following day with his afternoon class without me even saying a word.

He was a really great teacher!”

“My computer science teacher would belittle me in front of other students and even asked me why I showed up for class.

I hated his class and slowly just doing the work and failed the class because he made me believe I was dumb and incapable.

I’m currently working in an MSCS at a top 10 CS school and have plans to apply for PhD programs in CS next year.”

“Senior year I was placed in a Freshman typing class.

Everyone else was chatty and goofed off, but I wanted to learn to type, so I really put in a lot of effort. I only had two classes in the morning, and the rest of the day I was a waitress, as I was pretty much on my own in my senior year. I got called into work on the day of our class final, so I went to work and missed the final.

When I showed up to class the next day, I apologized to the teacher for missing the final. He asked me “do you want to know the grade you got?” When I replied yes, he said “I gave you an A because if you had been here, that’s what you would’ve gotten.”

I never forgot that. Thank you Mr. Wyatt.”

“Told me to stop dating my boyfriend when we were 13 because “It’s not like you’re gonna marry him”.

We stayed together and got married.”

“I once got expelled for smoking weed at school when at the time I never even smoked it.

I was 13 and started crying saying that I didn’t smoke any weed. Since I was crying, my eyes got red & then the teacher and principal say “just look how red your eyes are, you’re ripped out of your mind!”

It got me kicked off our Championship Basketball team and everything. I’ll never forgive those two for what they did to me & the stress they caused my single mother.”

“7th grade English teacher pointed out to the class that I stuttered.

9th grade English teacher told the class that the reason I left class every Friday was to go to speech therapy for stuttering.

“When I was in 5th grade in 1975, my parents were divorcing and I was living with my abusive father.

If I didn’t get B+ or better on my report card, I got the belt. Not a little, mind you. A full-on beat down, and probably denial of meals for a while. The ’70’s with an abusive parent were a very different time.

My father had quite a reputation in the small Pennsylvania town I lived in (McKean, PA). He was known as an incredibly strict person, and our neighbors all hated him. But this was a different time, and that sort of behavior was ignored in public.

My 5th grade math teacher, Mr. Cunningham, scared me. He looked a bit like my father, and didn’t suffer any nonsense in his classroom at all. I struggled with mathematics, and it just didn’t make sense to me.

We got our first report card in 5th grade. These were the days where you could carry a card with you for the day, and the teacher would write your grade on the report card. You would then have to take it home, and have a parent sign it to acknowledge that they had seen your grades.

So far, through the day, the grades were good. A’s, mostly, an A-, but all good.

Math was my last class of the day before I had to catch the bus.

When my report card came back to me, I froze in terror. I recall this moment like a photograph. The grade was a D, written in pen, right there on the report card. I knew what was coming. The blood drained out of my face.

Mr. Cunningham dismissed the class, and I was frozen in my desk. Scared of what he would do, and even more scared of what my father would do.

All the other kids had left the classroom, and my world around me was gone – just me, my books, and the D staring at me telling me that my 10-year old self was going to suffer. Badly.

I felt a hand on my shoulder, and I shook and started crying.

Mr. Cunningham looked at me. He took my report card out of my hand, and walked up to his desk. He called me up there. I was still terrified, probably shaking, definitely trying to hide my crying and failing.

He got out a black pen and changed the D into a B+. He didn’t say anything, he just looked at me. He knew. He could see the signs, and he knew how terrified I was and why.

I had no idea an adult could be so compassionate, and had no idea it was even possible to change something like that.

He handed my report card back to me, and said two words that have stayed with me to this day. “Earn this.” He put his hand on my shoulder and said, “I know. It’s not fair, and I’m sorry. You’re a smart kid, and you can get this. Just ask me for help.”

It was a simple act of kindness, and it’s stuck with me to this day. The math grade didn’t matter – I’m successful enough in my 50’s to not have that come up on my permanent record. But the permanent change of my impression of Mr. Cunningham is still very much with me.

If you have power over other people, you have to wield that power with compassion. You have to tailor that power to meet the needs of the individual. That is the lesson I learned that day from Mr. Cunningham.

The next terms I got a B+ or better. I assume it’s because I worked really hard, and Mr. Cunningham helped me out at lunch – or, he was kind because he knew.

Thank you, Mr. Cunningham. This was 45 years ago, and I still remember you.”

Did a teacher ever do something to you and you never forgot it?

Please tell us your stories in the comments. Thanks!