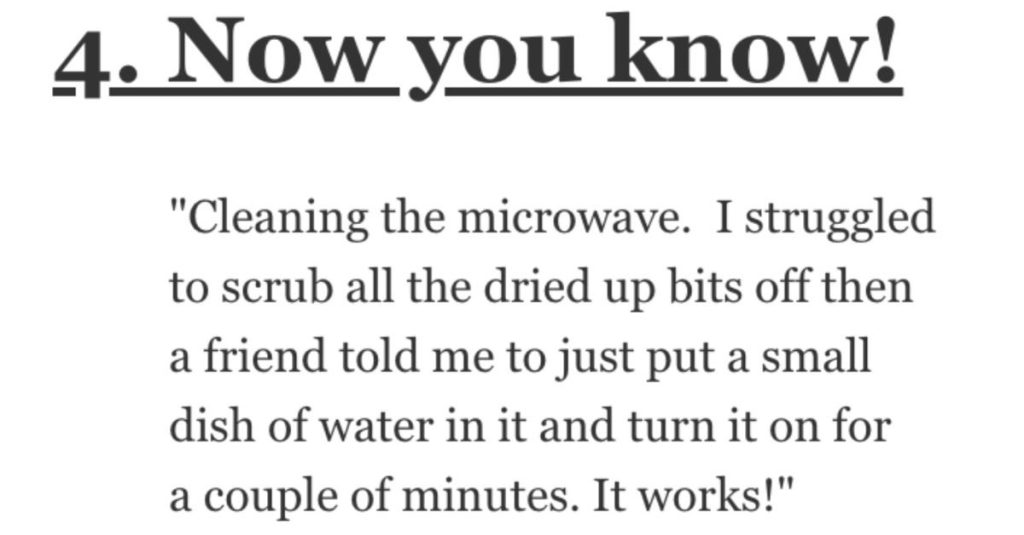 What Did You Do the Hard Way for a Long Time Because You Didn’t Know There Was an Easier Way? People Responded.

I have a confession to make…

I didn’t know my car radio had a Scan button for about 5 years, so I would manually scroll through stations CONSTANTLY while I looked for something I wanted to listen to.

But these days I just hit that Scan button and it’s smooth sailing, baby!

What did you do the hard way before you learned there was an easier way to do it?

“That you turn the deodorant to lift the hard plastic off.

Learned this about 5 years ago.

I’m 36 years old. I struggled needlessly for so long trying to pry that d**n thing off.”

Ignore everything you saw on tv/films/video games, read in books/websites, or heard from people with long list of tips/steps or ideas.

Just tell them you find them attractive or like them. From there ask for their number or set up a date and time.

We tend to make this way harder than it should be.

This also applies to women wanting to ask a guy out.”

“Cleaning things off of glass.

I used to spend a long time with unpleasant solvents and/or abrasive scrubby sponges to get soap scum and bird crap and other such residues off of glass. Now, I use a razor scraper and shave the stuff off the glass.

Often, I don’t even need to use a cleaning solvent or water. Razor scrapers are amazing. And they’re mis-named. You don’t use them to scrape anything. You shave or plane the junk off of glass and other hard surfaces with the blade.

Even paint comes off of glass super easily with a razor scraper.”

I struggled to scrub all the dried up bits off then a friend told me to just put a small dish of water in it and turn it on for a couple of minutes.

Everything wipes right out.”

“My credit union is fairly far away.

When I learned the concept of shared branches I was able to shorten my trip considerably by choosing among three other credit unions that are closer.”

“Knitting. I grew up using the “English method”.

This involves holding the yarn in one’s right hand. To make a stitch, one has to let go of the right needle and sort of “throw” the yarn over the needle tip. It is a pretty dramatic looking movement.

Then I discovered the “Continental method”. Here one holds the yarn in one’s left hand. To make a stitch, one sort of picks up the yarn with the tip of the needle. It requires very little hand movement.

So it is a lot easier on the hands, and theoretically faster.

I say theoretically as I am so used to the Englush method that I can easily do that quickly whilst watching TV. But I still need to look what I am doing with the new method. But it is getting quicker.

I have been knitting for nearly 50 years, and only doing the new method for 3 or 4 of those.

And now I can knit for longer without hand cramps and pains.”

Just clean them as soon as you’re done with them and put them away.

Stacking them up makes a bigger chore.”

I now bake @ 375 for 27 minutes on a cookie sheet covered with crinkled up aluminum foil.

No mess, perfect bacon every time.”

For years I held the handle the entire time.

Using two forks or whatever is for suckers.

Bust out the hand mixer and use that on your cooked chicken.

“If you don’t report your driver’s license as lost or stolen to the police department someone can pass themselves off as you during a crime.

Just found out last week that I’ve had a criminal record for 10 years in another state and had no idea; all becuase I didn’t report my ID when I lost my wallet in my 20s.

“Putting a towel over the sink to catch your hair when you shave.

For like 20 years I had to feel like i was trying to do counterforensics to not invite the ire of every woman I’ve been around.

One d**nk night with a buddy I was talking about making some kind of electrostatic hair catcher and he’s like “Why don’t you put a towel down?” Mind= blown!

Thanks for nothing, Dad.”