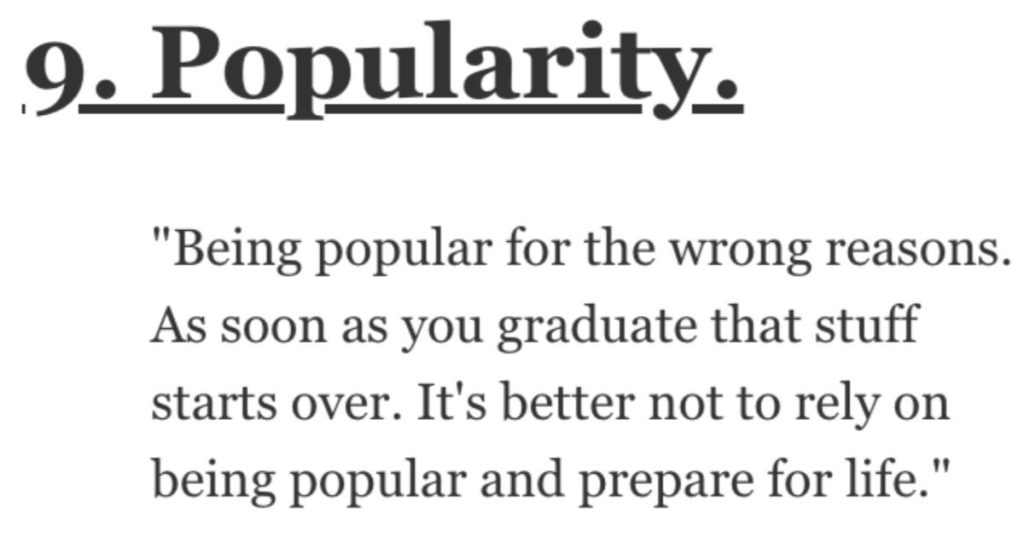 What Do High Schoolers Think Is Cool but Is Actually Embarrassing? People Shared Their Thoughts.

I think we can all agree that our high school years are…awkward.

And things that we thought were cool back then really weren’t.

NOT BY A LONG SHOT.

And today we’re gonna hear from AskReddit users about what they thought was cool during those years but was really cringeworthy.

“Hickeys.
I actually have no issue with them just so long as they’re hidden.”

Seriously, when you grow up and stop giving a f**k about other peoples opinions, life is so much better.”

For example, that thing where they comment “oh” on peoples posts and then claim to “just be saying oh.”

Everyone knows it’s not innocent, it’s done with the purpose of making the poster feel insecure or dumb.

Just things that can be played off as small, but that they know will have a bigger impact.”

“When I was 16 I used to drive like Ace Ventura with my head out the window.

I only lived a couple miles from the school so it wasn’t a big deal but it was dumb as hell.

A couple girls told me they saw me driving like that one day and they thought it was funny, so I accomplished what I set out to do I guess.”

“Being loud and obnoxious everywhere they go.

Like dude no one thinks you’re or your friends are cool over there yelling “p**is” and moaning cause you think it’s funny.”

I started when I was a stupid 16 year old because I thought it looked fun and cool. 7 years later it’s not fun or cool anymore when I try to quit and get so much anxiety and so irritable to the point where I fantasize about punching someone in the back of the head because they are taking too long to check out at the store.

Literally if I had a time machine and could only go back in time once, I’d probably go back and beat the s**t out of 16 year old me for ever starting any form of nicotine.”

They’re also going to get old and seem cringe to the kids one day.

It’s the cycle of life.”

“Being ‘edgy’ and ‘offensive’ just for the sake of it.

You think that mocking d**d people or posting r**ist/s**ist stuff on social media makes you a tough edgelord not to be f**ked with.

No, it just makes you look like a complete tryhard.”

“Being popular for the wrong reasons.

As soon as you graduate that stuff starts over.

It’s better not to rely on being popular and prepare for life.”

“Pretending to have some type of disorder, like that makes them special.

Like somehow everyone has multiple personalities now, one of the rarest disorders of it’s kind and everyone and their cousin suffers from it.”

“Crying on TikTok, or any kind of dancing on TikTok to something completely inappropriate.

Like a funeral or someone in a hospital bed fighting for their life.”

“The lifestyle of being “young and reckless”.

Having an addiction to drugs is not cool. Being in codependent relationships is not cool. Having s** in bathroom stalls and on a couch stored behind the theater stage is not cool. It’s just gross.

Skipping class is not cool. I don’t even know why people skipped classes at my high school. There was literally nothing to do but loiter in a bathroom.

Just enjoy your time not paying bills and be as self-centered for as long as you can.”