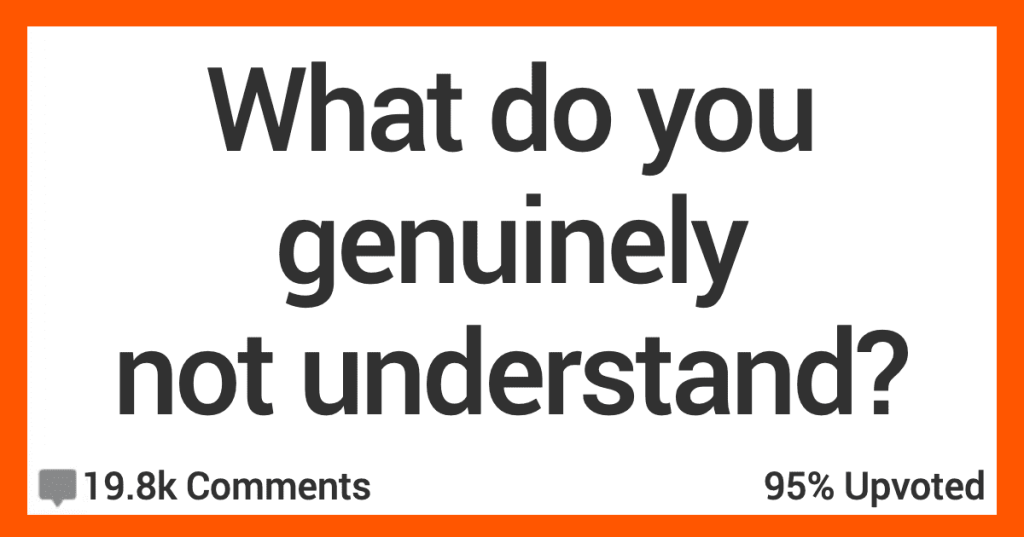 What Do You Genuinely Not Understand? Here’s What People Had to Say.

Do you want to know what I really, really don’t understand?

For the life of me, I could not do well in those subjects in school no matter how hard I tried and no matter how many times I took those classes.

But enough about me, let’s hear from AskReddit users about what they genuinely don’t understand.

“How someone could be okay with driving a loud car/truck/motorcycle through neighborhood.

I’m not trying make a statement or pick a fight, I actually can’t understand how someone could make decisions in their head where this behavior seems reasonable.”

“How wearing a mask turned into a political statement.

This bothers me every single minute of every day.

I h**e how politics had ruined so many lives.”

“I don’t understand why a lot of kids are taught to blindly respect adults just because they’re older. Anyone can be an a**hole, it doesn’t matter how many years they’ve avoided d**ng.

I got scolded for talking back to some a**hole I live near, because “he’s an adult and I’m a child”…but that doesn’t make it okay for HIM to have been an a**hole in the first place. If you want respect then don’t be a d**k, it’s a simple concept.”

“People looking down on other people taste (in music, food, clothes etc.) Or the concept of good taste.

I thought a lot about this and my only conclusion is that the only reason people do this (probably subconscious) is to make the self feel superior.”

“I have researched this many times, but try as I might I still cannot wrap my head around why speakers work. Not just how they work (copper wrapped around magnets, mostly) but why it do what it do.

Like, how TF does copper wrapped around magnets with a cone attached to it make all these sounds? It makes my brain crunch just thinking about it.”

“How are calories calculated?

7. A lot of lonely people out there.

I’ve had friends who’ve been sugar babies and they told me that they don’t pay for s**, but for companionship. That somehow puzzles me more.

Like paying for s** I can at least understand but paying for friendship??? It doesn’t make sense to me.”

I’ve read numerous articles about how it works and despite having degrees in both law and in math, I still don’t get it. The blockchain thing, yeah, okay, maybe, but “mining” for new “coins” makes absolutely no sense.

Add in the massive energy suck and I just kinda hope they all tank. NFTs I was able to figure out once I realized how asinine the very concept is. “Hey, I paid a million dollars for a picture that I can’t hang my living room, donate to a museum, or stop anyone online from looking at. Cool!!””

Why do you need to cheat instead of leave the relationship. And if you know that you’re not capable of committing to one person only why not just embrace that and be in a poly relationship with someone else who GETS IT?

It’s like the thrill for you people IS to cause pain to the other person. It’s sick.”

“Why businesses like payday loans and title max are not illegal. They just pray on people and rip them off.

How can you get your title back with title max when they prolly take your car and your title?”

That confuses me more than anything else.”

“Being deeply invested in a sports team where you don’t know any of the players personally or have anything to gain from the game’s outcome.”

Tell us what you genuinely don’t understand.