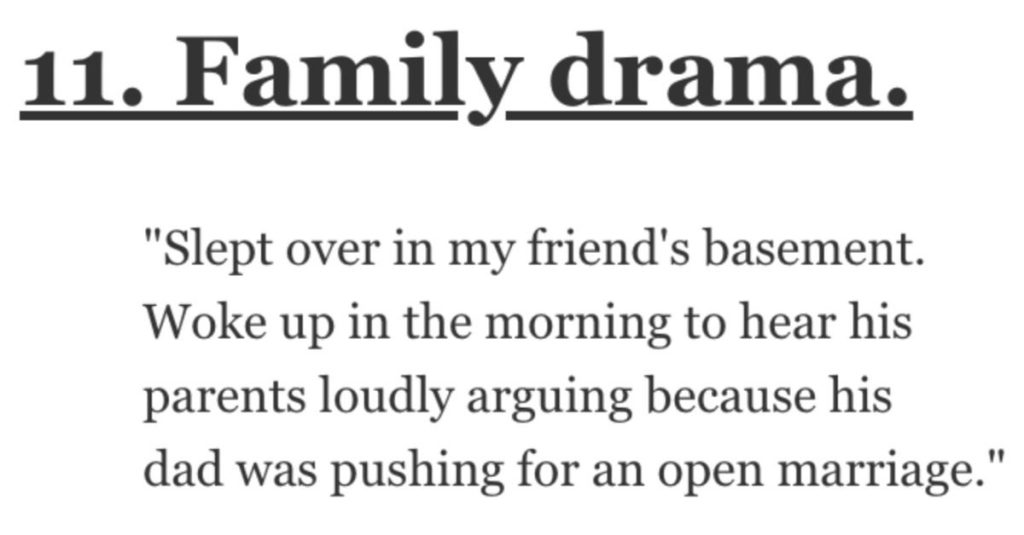 What Do You Know About Your Friend That’s Supposed to Be a Secret? People Responded.

Take a look at what folks on AskReddit had to say about this.

“Slept over in my friend’s basement.

Woke up in the morning to hear his parents loudly arguing because his dad was pushing for an open marriage.

They divorced about a year later.”

I knew the cop that was first on the scene. He told me what happened and I told him this was our high school friends dad.

He agreed to keep it on the down low.”

“My best friend tried to sleep with my dad in high school. He was married to my mom and they had more or less taken her in.

We’re still good friends but I’ve never told her that I know about it and I never plan to.”

“He doesn’t understand how his daughter was conceived because he always used a condom.

But I know that someone poked holes in them when they were mad at him.”

“That she was r**ed when she was a teenager and got pregnant. Her parents made her have the baby which was then put up for adoption. I’m friends with her cousin.

We just recently reconnected. The original friend in question is married to a controlling POS and I didn’t understand why she stays and why she is so childlike. Old friend told me one drunken late night.”

“That she’s afraid I’ll leave her & be mean like her other friends used to.

I’m here for the long haul, my friend.”

“After my five year relationship ended in a failed proposal, my friend started messaging my ex and essentially hitting on her, talking about s**, etc.

He was in a bad place. I forgave him without telling him I knew. Years later, it finally came up while we were both wasted. He was very regretful and sad about what he had done.

I assured him that I had already worked through it and feel that he’d never do that now. We’re as close as ever. This doesn’t quite fit the question but still seemed suitable.”

“That her boyfriend was actually my ex…

We decided not to speak about it!”

Just small lies about insignificant things, but that almost bothers me more.

I love him but I don’t trust him even a little.”

“My friend’s dad has an entire second family that she doesn’t know about.

It was before he married his current wife and had my friend and her siblings, but she doesn’t know about them.

He used to go on “business” trips to visit on occasion, but after the kids turned 18, he stopped. I found out through my friend’s older sister after she’d had a few too many to drink. I will never, ever say anything.”

“I’m certain one of my friends is gay.

He used to be out and dated men but stopped a good amount of years ago, doesn’t have much luck with women and is h**ophobic now. His stepdad was massively bigoted towards LGBT people and I think that’s what influenced him.

His step dad d**d a few months ago and he has a new love interest that none of us have met, I just want him to accept himself and be happy.”

“They confessed their love to my (now ex) partner while we were together.

Remember to be discreet!