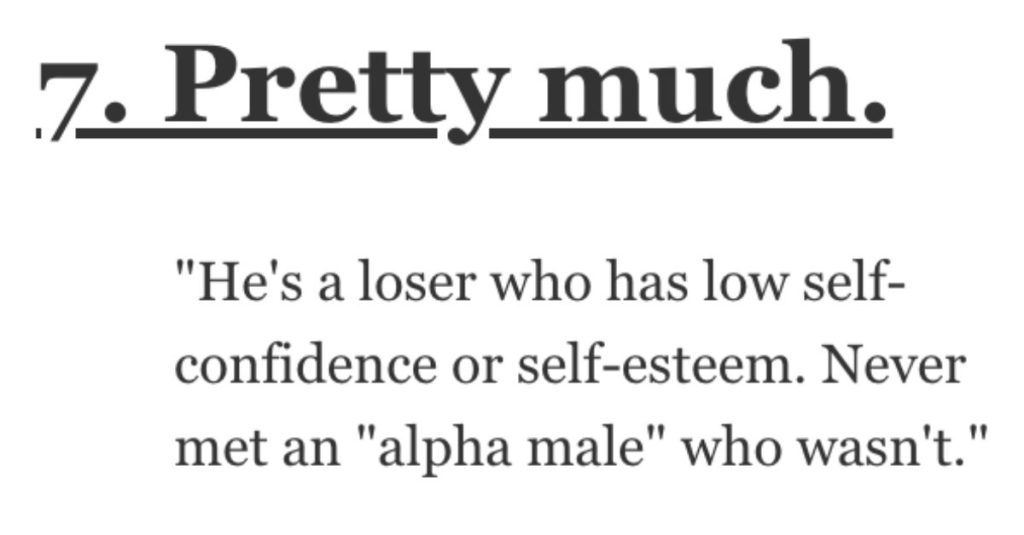 What Do You Think When You Hear a Guy Refer to Himself as an “Alpha Male”? People Responded.

I can’t say that I’ve ever actually heard a guy refer to himself as an “Alpha Male”…but there’s still time, my friends…

But chances are that you HAVE heard a man call himself this, because it seems like it’s a pretty popular way for fellas to pump themselves up.

Let’s take a look at what AskReddit users really think when a guy calls himself an “Alpha Male.”

“That he “refuses to live in fear” but is literally terrified of other people and of social progress.”

“He’s a loser who has low self-confidence or self-esteem.

““Alpha Male” men will become a**sive and act as if it’s your fault because you should have known it’s just what “comes with the territory” of being with an alpha male.”

“Any king who must say I am the king is no true king.””

A reference to securing the bag

Motivational quote about haters being jealous of success.”

6. Usually how it works.

“Arrogant. I’ve worked with arrogant males who wouldn’t admit what they didn’t know.

As I was an engineer in a refinery, one guy was so arrogant. On his first day at work, he broke into a discussion with “I think” and I reflexively said, I don’t care what you think.

He was fired after costing the refinery millions of dollars in under 2 years.”

“They tend to be overconfident, assertive/aggressive, and are proudly into toxic masculinity.

They’ll take personal offense to anything that calls their views into question and lash out either verbally or physically. This includes either telling them that they aren’t the image they are trying to project, or you taking on a gender role they don’t think you should have.

Probably should just avoid these volatile, narrow minded individuals at all costs, because while you could argue with them, they are more likely to go loud and/or violent than find a common-ground.”

“Alpha Male — the early version of a male, before testing and bug fixes.

Unstable and not suitable for the public.”

“Egomaniacal and suffering from delusions of grandeur.

Quite often vain or shallow and politically/socially simplistic, sometimes misogynistic, all until proven otherwise.”

“I immediately think they are insecure and fearful.

Alphas don’t need to announce it, because it’s obvious. It was my biggest pet peeve with Trump.

No one who is smart and successful needs to constantly remind everyone that they are. It’s self evident.”

Even the original author of the paper that observed alpha wolves admitted he was wrong.

This person is an idiot that doesn’t understand what being a human is.”

“It usually tells me that he’s pretty easy to manipulate.

All I have to do is dangle his masculinity in front of him with a challenge or competition that benefits me or others in some way.

He’ll feel like a winner, and I’ll get what I want out of him.”