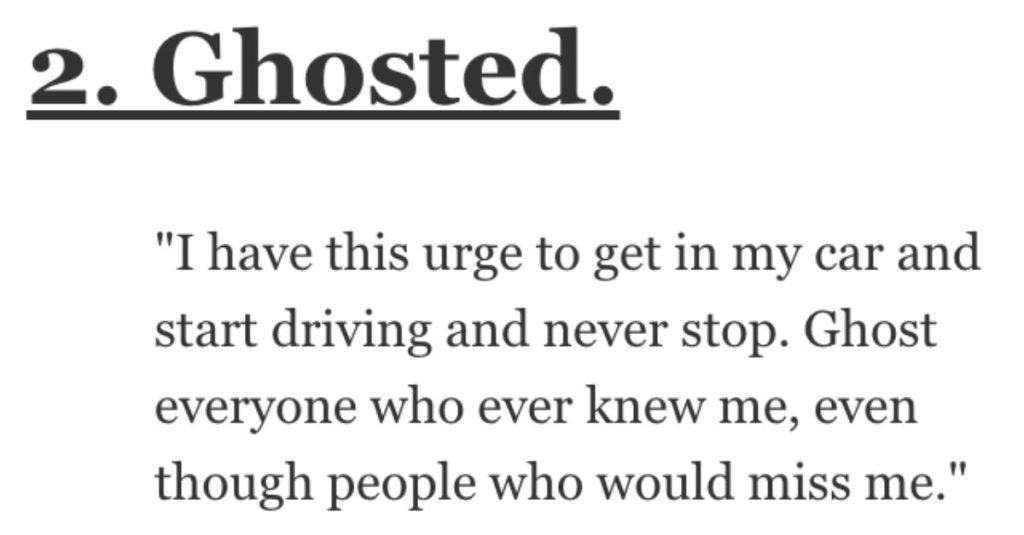 What Is Your Darkest Desire? Here’s What People Had to Say.

We’re gonna hear today from some folks who are gonna let their freak flags fly.

Does that sound good to you?

We thought you’d be into it!

Check out the darkest desires of AskReddit users below.

“Withdrawing all my money, cutting/dying my hair, and buying a tiny house in the middle of nowhere along a highway in the super rural US.

Work part time at a liquor store and adopt an old dog, spend the rest of my time playing video games. Being friendly with everyone but never forming any attachments. Move every few years to facilitate this.”

“I have this urge to get in my car and start driving and never stop.

Ghost everyone who ever knew me, even though people who would miss me, I have pets to care for, and responsibilities to loved ones who depend on me to be here.

I just want to be anyone else.”

“Making it into history books through committing a very publicized crime.

The thing that spoils that fantasy is that I don’t want to serve any time in prison, let alone life, and the chances that it’d be that way are just too high.

I would simply like to play Just Dance without one of my kids trying to take a Joy Con or inevitably deciding they need a snack right when I’m leading the dance without having to wait until they are all asleep and I’m too tired.

Not much to ask for but it’s like a forbidden pleasure when you have so many kids. Lol.”

“Shrink myself to the size of a mouse.

I’d leave the world of men behind me forever, and live amongst the mice. And I would bring technology in and art to those uncultured swine. And I would build tiny tools for their mouse hands made from toothpicks and marshmallows. And I would be there king, NAY, their prince. GILDEROY THE MOUSE PRINCE!

Ruling from my grand castle inches high, carved from the finest cheeses. And there I would dwell with my three mouse wives, and my twelve mouse concubines. Oh, but the wars we’d have with the frogs, terrible, just terrible. Those metal mice warriors, the atrocities they’ve seen.

Yes, that is my dream… My secret dream.”

“I actually desire power the most.

To have enough money, to not have to submit to anyone.

To be able to influence my suroundings and make an impact.”

“To get a tattoo.

My stepmother DESPISES tattoos. My relationship with my parents is rocky, but it’s steadily improving. But my childhood prior (and after) meeting my stepmum has been difficult. I lost my mum to cancer, was bullied a lot. In a sense I felt like I was forced to grow up too fast.

I feel a great divide in culture between myself and young adults my age because I became very reclusive and lonely and anxious and missed out on a LOT of things my generation was excited about. I thought ‘Well if I can’t be a child, I’ll be an adult’. But what I thought was being an adult was very romatizised in my head compared to what it’s REALLY like.

I learned to fight a battle alone that nobody knew or understood. Where I was simultaneously a child and an adult, but never a middle ground like a teenager. There were a few times where I wanted to just d** because I felt so alone.

People around me grew up and I was left to find out what it means to grow up on my own. But in spite of a horrible situation and a great loss of what could have been, I prevailed.

I’d get a unicorn reared up to fight as my tattoo, as it represents the child in me who despite all the chances I could have taken to just end it all, survived.

But, it would also represent my will to keep fighting against the cruelty of fate and to use my gift of life to continue to help others. I’d probably put it on my neck or my shoulder.”

What can I say, I love McDonald’s and chocolate.”

“The darkest one is the climate change to f**k things just enough to have a nice post apocalyptic travel season and then help rebuild a nice society for the survivors.”

“I want a Bonnie & Clyde style crime spree with my SO.

Just modern day version. Obvs I will be a head to toe leather clad gun toting goddess. Have insane drug fuelled p**no style nasty s** with him as helicopters circle over the building trying to land to capture us because we just can’t help ourselves.

But we escape, with the money or the code or whatever we stole, change identities and do it all over again never getting caught. Just having wild adventures and living life.”

“Honestly, I want to be a house husband to someone who makes alot of money. Bonus points if they’re kinda controlling.

I really don’t care as long as I can cook all their meals myself. I’d ask what they want for breakfast lunch and dinner, and if they like the way I organize and if not how would they want it. We’d move to wherever they need to for work or even just because they want to live there.

The only thing is they need to allow me to be very physically affectionate like random cuddling when watching tv or just holding on to them in public; also while we wouldn’t have daily s**, it’d have to be like, often I guess. Maybe at least twice a week. Idk how often married people usually have s**.

I know it’s a bit unhealthy and toxic, but that’s why I don’t tell people.”

“To casually take strong opiates without facing side effects or addiction.

I’m not an addict, but I sure would like to live pain free.”