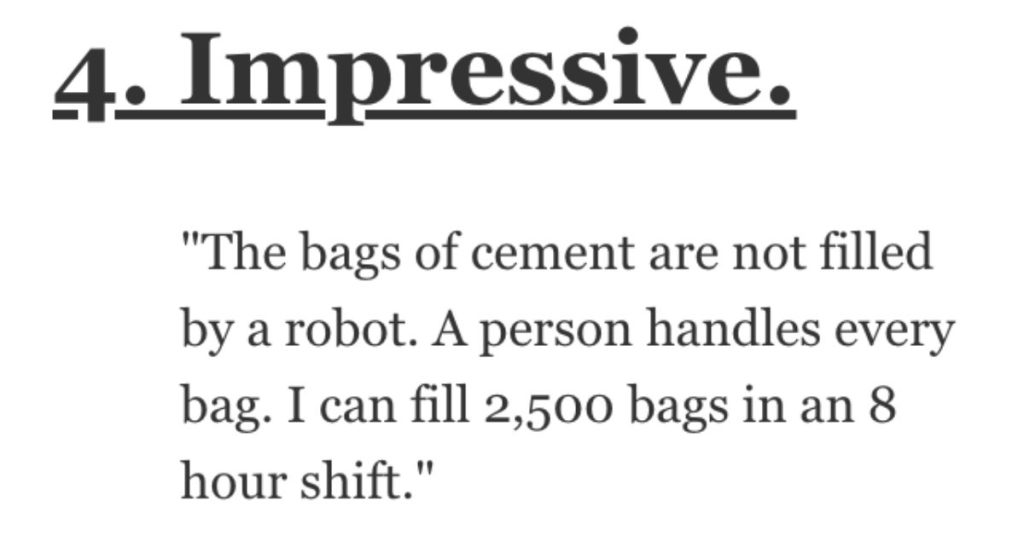 What Facts About Your Job Does the General Public Have No Idea About? Here’s What People Said.

I really wish there was an adult version of Career Day so we could take a day off once in a while to learn about what other folks do for a living.

I think it would be a lot of fun!

But I guess you can only get out of your responsibilities to do that when you’re still in school…bummer!

But today we’re all in luck because we’re gonna hear from people about interesting things about their jobs that most people don’t know about.

“Most fossils in museums are plastic replicas. Not always the whole thing, but any full dinosaur you see more than likely has at least some plastic components.

There’s only a handful of businesses in the world that make the replicas and, at least in the US, they’re pretty small operations.”

“Brewing beer is mostly cleaning stuff and not drinking a bunch of beer.

“When I put a plank into a wood boat it is not watertight, but after the boat gets in the water and the wood swells it will be watertight.”

“The bags of cement are not filled by a robot.

A person handles every bag.

The reason you love our food is salt and butter… and a lot of it.”

“Worked at an automotive assembly plant.

Every 60 seconds the assembly line is shut down, the plant is losing $10,000. Missing parts, incorrectly sequenced material(a red bumper shows up next in line when it’s a blue car in bumper install), broken lift assist devices, 1 person running off the line to bathroom(it’s happened), chains breaking etc.. could all shut down the line.

Tensions were incredibly high and the stress was unbelievable on some days. Other days it was super easy and chill. Good pay. High school degree is the only mandatory requirement to be a supervisor, and with the mandatory OT(usually you work 5-6 days, 10-12 hour shifts) you’re making at least 100k.”

Only a minority of companies take data security seriously enough to prevent leaks. For every publicly announced leak, there are 20 that were swept under the rug. Proper security requires that the whole structure, from the top down, has an understanding of the issues.

When you drive by 6 people standing around one guy working, the group is usually comprised of inspectors, superintendents, subs, engineers, and foremen all standing around a laborer to talk. You can differentiate by the hardhats and how clean they are.

If you want to get upset at someone for your commute being slowed, don’t pick the dirty guys.”

I don’t do this because it’s the only job I could get. I do it because I’m passionately invested in making sure poor people have access to the courts and because without us, there would be absolutely nothing between them and the awesome power of the government. The vast majority of us are there for the same reason.

We have to work with what we get so our win/loss ratio isn’t as impressive as theirs. Ask a private defense attorney what they think of public defenders- most will tell you that some of the best attorneys they’ve known are PDs.

While we can’t take the time to hold your hand and take every one of your calls, we actually do care about you and your case. I work nights. I work weekends. In fact, every weekend I’m at the jail, seeing my guys, because I don’t have time during the week.

We are excellent attorneys who chose public service.”

“US based flight attendant here.

Unless you’re flying on Delta, your flight attendants aren’t getting paid during boarding and deplaning. We’re just as annoyed as the next person that the flight is delayed because of a mechanical issue, weather, etc.

If the boarding door is closed we (usually) don’t mind though.”

Pro: The produced electricity is a lot cheaper than people realize. Wind (and solar as well) is already cheaper than any of the ‘dirty’ energy sources (including nuclear).

Con: The company I work for is a huge player in the field and even we have to decline 50% of the clients because there’s just not enough engineers to plan the sustainable future everyone talks about at the moment.”

People get seen by severity, not the order they came in the door.

Also, just because you came in by ambulance doesn’t mean you immediately bypass the waiting room.”

What are some facts about your job that the general public doesn’t know about?