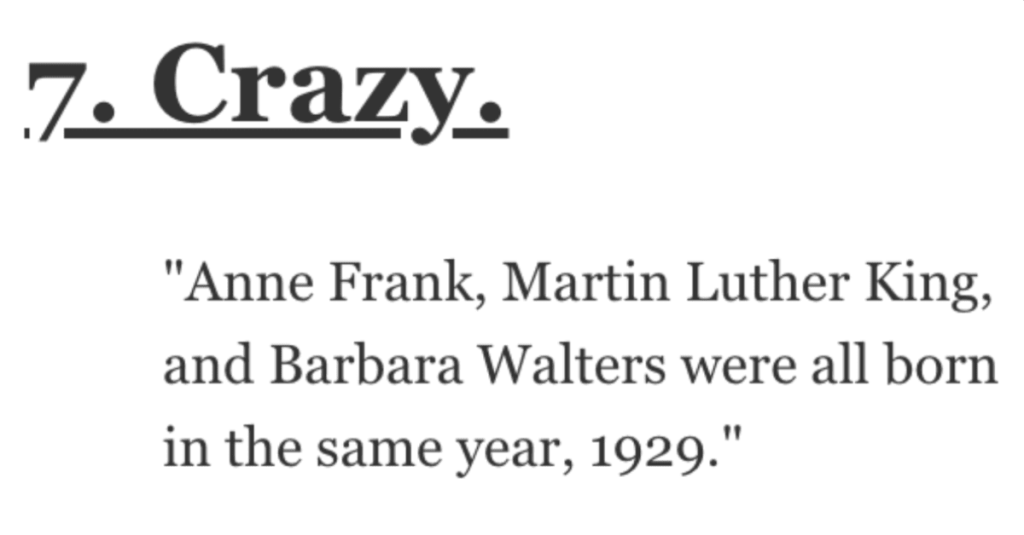 What Is True but a Lot of People Don’t Believe It? Here’s What People Had to Say.

Believe it or not, life is strange!

Some might even say that it’s stranger than fiction…but that’s what makes it so interesting!

So, what’s true but a lot of people don’t believe it?

“Between 10 to 35 percent of people suffer from a condition where they sneeze when they walk into bright light suddenly.

“Before withdrawing from Afghanistan, the last platoon deployed by the USA for fight against terrorism in retaliation to the 9/11 attacks had soldiers who WEREN’T EVEN BORN when the war started.”

“Anne Frank, Martin Luther King, and Barbara Walters were all born in the same year, 1929.”

“Every single person on Earth could have about 950 square feet in Texas and leave the rest of the world completely empty.”

“”Who Framed Roger Rabbit” marks the one and only time that Mickey Mouse and Bugs Bunny have ever officially appeared in the same place at the same time, as well as Daffy and Donald.

All characters screentime between both companies was timed down to the frame to make sure they both had exactly equal amounts with their characters.”

“By the time the last Woolly Mammoths went extinct (in modern day Russia), the Great Pyramid of Giza has already been standing for centuries.”

“In the Alaskan winter, wood frogs bodies will freeze almost completely solid to the point where their heart stops beating and blood no longer flows. If you bent their leg it would snap off like a popsicle.

At an organismal level they are essentially d**d. They can survive his way for 7 months at zero degrees while cold weather passes, thawing out once again in spring.

“Many whale species can actually read human emotion through tone of voice.”

“Pistachios are highly flammable when stored in high quantities, and are prone to self-heating and spontaneous combustion.”

“Vitamin C will not help your cold.

Also, you will not get sick from going outside in winter with wet hair.”

“Nuclear energy is a safe and clean energy source.

There has only been two major accidents with nuclear fission energy and both were due to neglect of the systems.”