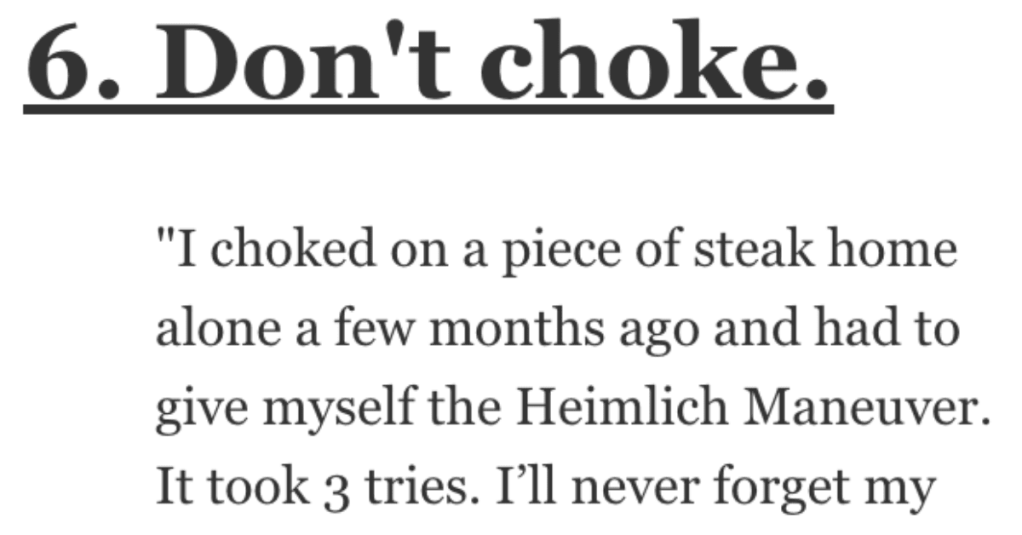 What Is Your Biggest Fear? Here’s What People Had to Say.

It’s pretty terrifying to contemplate all the things that could go wrong in our daily lives.

But we all have fears that are bigger than others…

What’s your biggest fear in life?

Here’s how folks responded on AskReddit.

“Drowning, getting stuck in some tight place and asphyxiating/d**ng of hunger in there, or getting steamed to de**h.”

“Biggest fear is losing everything I have worked so hard for later in life.

I watched my parents work hard do everything right build wealth and then almost towards their 50s my father got sick, lost his job. And now struggle to make ends they had to sell anything that had any value to them.

Now they just go through life with seemingly little enjoyment because they had everything set and in a blink of an eye it was gone and probably never come back.”

“Being one of those people who d**s alone in their home and doesn’t get found for weeks or more because they have no one who cares enough to notice they’re not around anymore.”

You’re fine one moment, and then the next day you have a headache. Turns out you got infected on that camping trip six years ago and it’s been hiding in you ever since.

Now that you have a headache, it’s in your brain and you’re already d**d. There’s next to nothing doctors can do except put you in a coma and say a prayer, but odds are nearly 100% that if you do survive that you’re a vegetable or nearly one.

You experience incredible pain, irrational hydrophobia, manic behavioral changes, and a total loss of motor control near the end. It’s got to be one of the most humiliating, dehumanizing and terrifying ways to go, and it can happen just like that.

Day to day, the ocean and all of it’s scary mysteries.”

“I choked on a piece of steak home alone a few months ago and had to give myself the Heimlich Maneuver.

It took 3 tries. I’ll never forget my dog staring at me and the thought of my girlfriend coming home to find me d**d on the floor of our apartment.

Now I think about that every time I eat by myself. So choking to d**th alone is my greatest fear.”

“Not being alive anymore – the finality.

What I’m afraid of is being… done. Here one day, then gone. Not able to do anything else.

I cannot out it into better words, that’s how suffocating the anxiety of being gone is for me. Maybe it would be better if I were religious and believed in an after life, but the best I can do is convince myself that I believe your personal energy spreads to other beautiful things in life when you pass.

But the mind, the mind just being… done. That is truly frightening to me.”

A climate or economic or disease based destruction of society as we know it. Every part of normal life ceasing to exist, and every person having to fend for themselves.

There’s a documentary called ‘Collapse’ that scared the hell out of me.”

“That I may suffer a debilitating injury or degenerative neurological disorder and be incapable of taking my own life if I deem it necessary.”

“Having to face the d**th of my parents.

They’re in their late 60s and I’m hoping to have a lot more years with them, but I’m always worried.

I honestly don’t know what I’m going to do when the day comes.”

“The feeling of being alone in a tough situation and no one to help you get out of there, when you keep hearing there’s light at the end of the tunnel, but you know you won’t make it there alone.”

“The thought of anything/anyone hurting or something seriously bad happening to my daughter.

I once heard someone say that having a child is like taking a piece of your heart and letting it walk around outside of your body.

Thats exactly what it feels like. I don’t care for much things, but I would be nothing but an empty shell without her.”

“Losing my husband is mine.

I fear losing my family members too, but losing my husband would just knock me down so hard I don’t know that I would ever get up again. He is everything to me and bring so much joy and purpose to my life. He makes all of my dreams and whims come true.

Without him I would be so empty and alone and lost.

Eventually, I would probably recover from losing him. But that would take me a very long time and I might not make it through that time.”