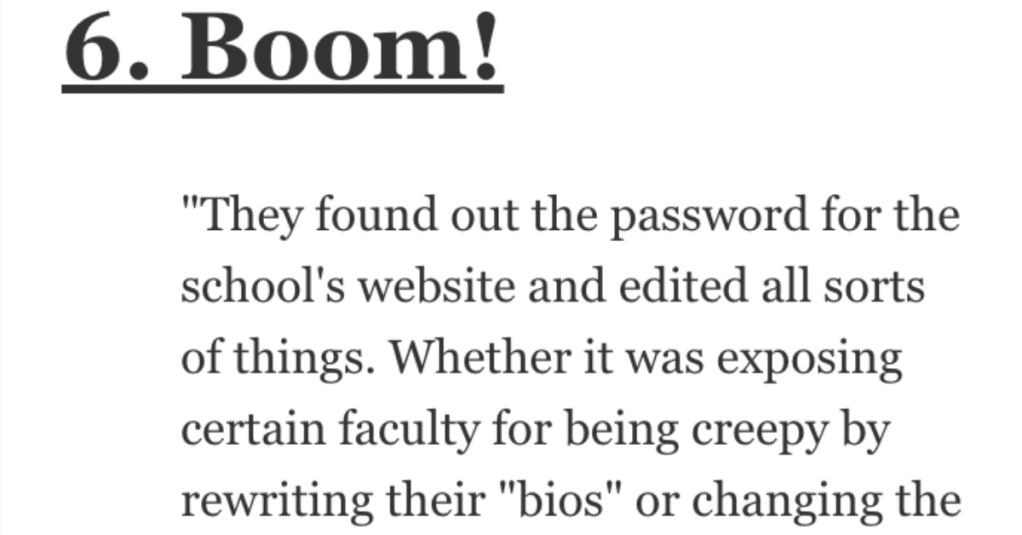 What Was the Most Legendary Thing a Student Did at School? People Shared Their Stories.

Legends are born in high school, no doubt about it.

Maybe it’s because they pulled off a crazy stunt, maybe they had it out with a teacher or the principal in front of everyone, or maybe they even got kicked out for being a juvenile delinquent.

What was the most legendary thing a kid did at your school?

“Piano in the middle of the theater stage.

Unattended high school seniors wandering around during study hall. One of the students sits down and starts banging on the keys and screaming random lyrics. The rest of us are sitting in the seats.

While he’s banging away, the side stage door opens and the principal is standing there, obviously had heard the ruckus and came to investigate. The student on the piano has their back to the principal and doesn’t notice. We are rolling with laughter as he continues to make up ridiculous lyrics and mash the keys, unaware.

He stops to admire his fans and the principal clears her throat. He turns around to see her. He slowly turns back to the piano, closes the rack over the keys, expression unchanged. He calmly gets up and walks to the stage door opposite of the principle and exits the stage.

Minutes go by as we are dying with laughter and the principal is still just standing there assessing. Then, the same student appears in the sound booth behind us having gone under the stage, now wearing a woman’s dress and wig that he had found in the changing rooms. He throws open the window and shouts down “Miss Thompson! I heard a ruckus and came running to see what was afoot!”

The principal just laughed and exited stage right. We only had like a week left and she didn’t care.”

“There were three high schools in my home town.

Two of them, both named after famous historical figures of said town, were in a sort of rivalry with each other – nothing serious, but the students would casually trash talk the other school a lot, mostly in good fun.

Each school had a display case with a bust of their respective historical namesake somewhere in the building. They were just some decoration, object that you would pass by every single day and pay little attention to. So we figured we’d test how little attention people actually paid these things.

So one night, a few buddies of mine and I got together. Most of us were from my school, but we had a few “inside men” from the other one as well. We split up into two teams, got access to both buildings simultaniously, picked open the very cheap locks on the display cases, grabbed the busts and switched them.

Keep in mind, these schools were not that close to one another, and none of us had been old enough to drive at that point, so we had to carry these f**king limestone busts through half the town. We then locked the busts into the display cases again and left. We had managed completely non-destructive entry to both schools, so nobody ever found out.

It took almost an entire school year for anyone to notice. To this day, no teacher has ever found out who was reponsible. But no damage was done, so they didn’t try too hard to figure it out.”

“There was this guy who was almost universally-liked in my high school. Did everything, AP classes, theater, football, track. His grades were good but he wasn’t the valedictorian.

That didn’t stop him from getting up during the graduation ceremony and giving a speech like there was nothing strange about it. And they let him finish, too.”

“This kid in my class put the school for sale on Craigslist. He provided the school’s attendance office number as a point of contact because everyone h**ed the receptionist there.

They were getting calls from interested buyers for days who wanted to buy a multiple acres of property with a big swimming pool and a track.”

“This kid once brought a backpack full, and I mean completely full of marbles to school. He went to the main staircase near the front up the third floor and dumped the whole bag over the stairwell.

How those marbles didn’t break the glass trophy case at the bottom is beyond me but marbles went everywhere. Surprisingly he never got caught.

He either managed to run to one of the stairwells at the end of the hall and get to the bottom before teachers had time to react or he hid somewhere until the first bell rang.”

Whether it was exposing certain faculty for being creepy by rewriting their “bios” or changing the  ‘Campus Security & Safety’ tab to ‘SNITCHES GET STITCHES’.

It made quite the buzz for years to come and as far as I know, they never got caught.”

“One of my friends brought in a universal remote and tuned it to the TV in the lunch hall. This TV’s original remote had long since been lost so he had the only one.

Instead of the news during lunch he would change it to sit coms etc. The teachers were pretty clueless and kept flicking through dozens of channels only for him to immediately change back. They even started turning it off. He just turned it back on again.

About a month of this and the teachers finally gave up. Nobody except our immediate friend group knew it was him doing this, but the entire school had whispers about this mystery man for ending the scourge that was the news channel.”

“A kid hit the fire alarm when the mayor was visiting our school.

For context, we hard an assembly the week before where we were specifically told not to hit the fire alarm during the mayor’s visit unless there was an actual fire, as it was a common occurrence at our school to just hit the fire alarm whenever.”

“We had mandatory swimming classes in my sophomore year of high school.

Anyways, 3 days a week, the school was getting bomb threats and all of us would have to leave class on go to the gym. The threats always happened at the same time. This went on for weeks and weeks.

It turns out it, there was this kid who didnt want to swim and who was using a payphone down the block to call in the threats (this was 1985). He go suspended for 2 weeks and had to take gym for summer school.

He is a legend to this day, yet I cant remember his name.”

“We had two pretty epic senior pranks in my HS days.

Then my senior year a fellow student got the bright idea to dress up as a gorilla and go up on the roof of the school with a bag of bananas. The Swat team was called in and it was kinda scary seeing guys with a**ault rifles outside our classroom window.

Then someone told me it was just so and so on the roof in a gorilla costume. He got in a lot of trouble considering he was 18 at the time.”

“The senior prank one year was hiring a mariachi band to follow our principal around all day.

He loved it- went classroom to classroom so everyone could see it and take pictures/videos and have a fun break from class.”

“Kid broke into the PA speaker room or whatever it’s called, locked himself in and started publicly dismissing everyone’s future detention sentences one by one.

Than he started to just burp in the mic before we heard the teachers and the principal break in,.The principal shouted “You d**n…” than it got cut off.”

Tell us an epic story that went down in your high school.