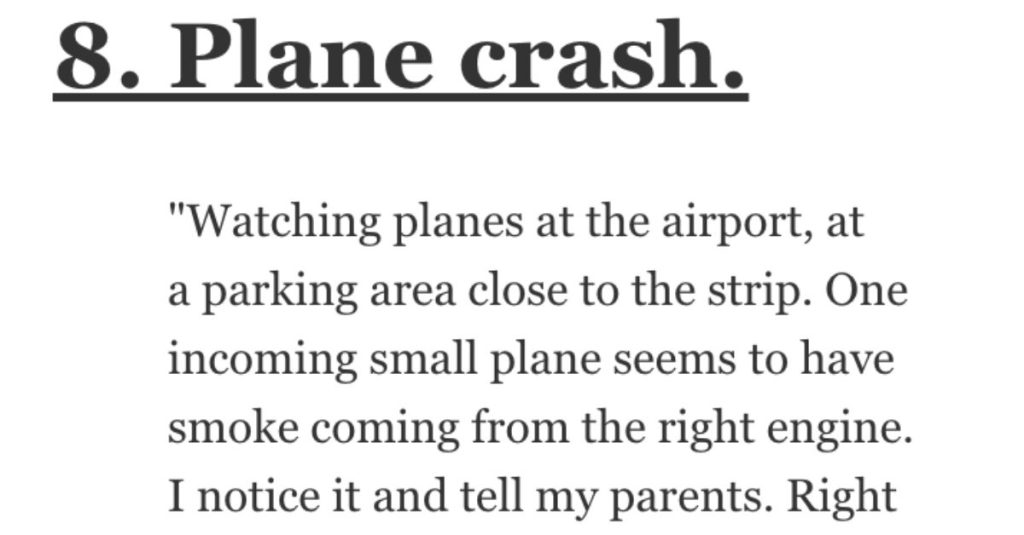 What’s the Most Shocking Thing You’ve Ever Seen in Your Life? People Shared Their Stories.

When I was about 7-years-old, I saw a man fall from the upper deck at Comiskey Stadium during a Chicago White Sox game.

It happened in the blink of an eye and later on that night we heard that the guy passed away.

Honestly, it was pretty scary to see something like that as a little kid.

Let’s hear from AskReddit users about the most shocking things they’ve ever seen in their lives.

1. Burned into your head.

“This happened back when i was in college. I was smoking by the window and someone jumped from the rooftop. He landed on the train tracks in front of our building.

Train services were stopped for hours for his remains to be scrapped by police. That image is burned in my head now.”

“Driving and a guy in an SUV passed by me in the most inside lane like a bullet. Speeding for sure but I was already going 120km/h to keep with traffic. God knows what he was doing, easy 150 or more.

No sooner does he pass me than he cuts across the face of my car and across 4 or 5 more lanes of traffic to try to make it to an off ramp.

I watched him go straight into the side of a tractor trailer coming in the far right lane, and then out of my mirror saw the truck jackknifing and other cars start to crash into them.

I can’t remember now but it was something like a 20 car pileup and it was so out of the blue and so unnecessary.”

“I was parked at a railroad crossing in rural Iowa.

The ground vibes were odd and intense. I decided to back up the truck.

“Guy on a motorbike wasn’t paying attention and hit the back of an HGV at about 40 mph. The impact k**led him instantly and his head exploded inside his helmet.

Gants Hill about 23 years ago.

I was in the car behind him when it happened, and I watched the agony of it in slow motion.

I’ve seen some traumatic s**t over the years, but nothing comes close to the crushing realisation of how life can change in a second.”

I was walking my dog on the other side of the street, and the owner was out in the yard with their dog. I think they were walking to their mailbox with it. The puppy saw me and my dog, barked excitedly and ran over to try and say hi. Right in front of a busy residential street.

I didn’t know what to do. The car stopped. I just walked home, crying the whole time. I had nightmares for a few weeks.”

“I was in Calcutta in 2009 and came across a filthy naked lady except for a hessian sack blanket. She had clearly not washed in weeks and was raving mad, writhing on the pavement.

In shock, my wife and I immediately attempted to help her and ask each other how we may call an ambulance. Then we realised that everyone else was walking by, some literally stepping over her on their way and ignoring her cries.

I looked and saw pure madness in her eyes.

I was 8 and my parents worked with people in prison (among other things). I made a drawing for a British prisoner, with him, the jail, the football field, and a helicopter because I was 8.

We got interrogated and my drawing sent up the chain to the prison warden, because they thought it was an escape plan.

Those cells were so cramped that people had to sleep in turns, and 8 year old me thought I was going to end up in one.”

“Watching planes at the airport, at a parking area close to the strip.

One incoming small plane seems to have smoke coming from the right engine. I notice it and tell my parents.

Right before landing it veers sharp to the right, straight over our heads (not sure how low though) and crashes into the fields behind us. I believe only the pilot deceased.”

“When I was in prison, a little Puerto Rican dude, maybe 5’4″ came up behind a HUGE Jamaican guy, grabbed him by the dreds, pulled his head back, and cut his throat from ear to ear with a folded over can top.

“Someone being electrocuted on a live wire.

It was my uncle’s neighbor repairing something.

The most shocking thing is that we were completely not aware that something is happening after it was way too late.”

“Saw a dude commit s**cide, jumped off the building I work at, landed outside the window where I worked.

I was probably the closest person to where he landed. He jumped from one of the floors above where I was so I didn’t see him beforehand, just saw his body hit the floor and then he lay in a facedown motionless heap.

Now he wasn’t completely disjointed or anything, you could have sworn he’d just fallen a small distance. But needless to say he didn’t make it.”

“When in Spain I came upon an overpass with something underneath it. It took getting a bit closer to realize it was a man who had hung himself.

You think it’s something you’d stare at out of morbid curiosity, but when you’re faced with it, you realize the best thing is not to see it.”

Talk to us in the comments and tell us what you think.