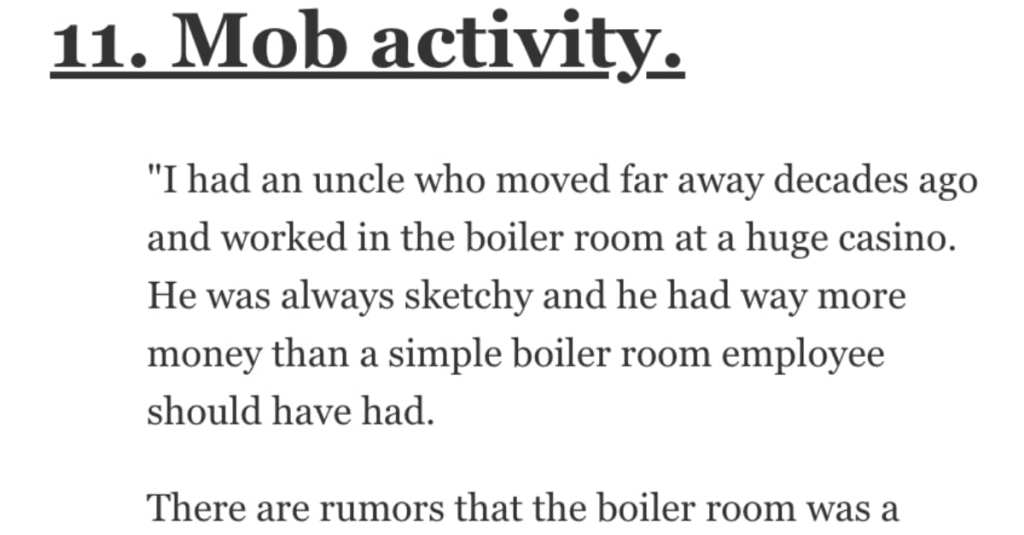 What Is Your Darkest Family Secret? Here’s What People Said.

Every family has secrets. Some are definitely scarier and more serious than others, but we all have them on some level.

Are you ready to get a big dose of people who were willing to spill the beans about the deep, dark secrets in their families?

Let’s see what AskReddit users had to say about this…

“One family member killed another by leaving a bag of poisoned donuts on the front steps.

We are now “hesitant” about accepting donuts.”

“My great grandfather shot and killed a man in his grocery store back in the 1930s over a poker game.

He ran a speakeasy out of the back of his store and lost almost $2k so as the guy was walking out the front after the store closed he shot him and got away with it by telling the police the man robbed him.

It wasn’t until he was on his death bed he told my grandfather what had happened.”

“My Great-Great Grandmother (single) came over from Germany after WWI, and had a kid 2 months later. She met a guy and “worked” for him for about a decade, mysteriously having two more kids during that time.

Eventually she got married and moved away, and left the kids with the man. She eventually had my Great Grandfather, and he grew up without knowing anything about his half siblings. That was until about 70 years later when one of their daughters sent a letter to my grandma explaining their relationship.

They promptly met up and realized they had only been living about 20 miles from each other, and the relationship rekindled from there. They even came to my Grandpa’s funeral in 99, where it was revealed that some of the family actually did know about them all along.

“I learned my disabled great aunt was r*ped multiple times while she was in high school, including by a teacher and it resulted in at least 3 pregnancies that she was forced to carry and give up for adoption, and then shamed for.

I found out because I did 23andMe and found cousins my dad couldn’t explain so there was a very awful phone call to understand why.”

“My grandpa was kidnapped and forced to work for the Viet Cong. When he died in combat, no one on either side would claim him so he was buried in an unmarked grave.

My grandma was left caring for 3 kids (my mom, aunt, uncle). Grandma was working in the fields until someone got her to work as a “bar girl” in Saigon. She met my now step grandfather (American GI) and they got married and she moved to Ohio with him. She never told him she had any kids bc she didn’t think he would marry her.

When my mom came to America 2 decades later, my grandma made her say my mom was her niece. I still call him Uncle.”

“My brother shot himself in the leg to get out of Iraq and tried to blame it on an enemy attack. I learned about this the DAY I arrived in Afghanistan for my year-long tour.

All I heard was that he was shot. I found out later it was a self-inflicted would and he was out on suicide watch and was kicked out with a less than honorable discharge. He’s never actually told anyone this, I just heard it through the national guard being kind of like a gossipy small town.

I actually don’t hold it against him. War sucked. He’s absolutely ruined his life since then by becoming an alcoholic and sitting the world out. Just sad all around.

Also, my mom and her sister married the same man so all my siblings are also cousins with each other.”

“Found out last year that I am a direct descendant Thomas Rood. He was the first person to be executed for incest in the US.

He r*ped his daughter Sarah and it came to light when she gave birth to a son named George. My family line is descended from George.”

“My family is of Swiss descent. My great grandfather murdered someone back in Switzerland then fled to the US with his wife. They moved to a small town in Virginia and had my grandpa along with his siblings.

Grandpa only found out about this because he found multiple journals depicting the turmoil it caused between him and his wife while fleeing to the US.”

“I once borrowed my granddad’s video camera for a trip. He said he put a fresh tape in the camera for me, and gave me a backup (I was like, 12 at the time and into filming stuff BC I wanted to be a director).

Get back from the trip, rewind the tape and review the footage. Low light in a room I didn’t recognize. Two people…one laying down, another to the side, bobbing her….

OH MY GOD MY GRANDPARENTS MADE A P*RNO AND GRANNY WAS BLOWING PAPA.

I told my dad what I saw. We never spoke of it and they have no idea I know. Papa took that secret to the grave with him three years ago, and I have decades to live with that scar now.”

“My dad died of a drug overdose when he was only 25. I was 6 mos old. Our family and his hid the true reason, and told everyone it was a heart attack.

This is even what I grew up thinking. Only my mom, my aunt, 2 uncles, and my 4 grandparents knew the real cause. I found out the real cause of his death when I had to get his death certificate for college financial aid.

And now I am burdened with continuing the lie to the greater community who knew him.”

“I had an uncle who moved far away decades ago and worked in the boiler room at a huge casino.

He was always sketchy and he had way more money than a simple boiler room employee should have had.

There are rumors that the boiler room was a really useful thing for the Mob, due to boilers doubling as incinerators for certain purposes.

Many unanswered questions there…”

“My sister was given a horse for her birthday when she was young, but shortly after we moved houses. During the move, we left the horse with our grandad til we had our own pasture fenced up.

My grandad was a pleasant enough man, but he was a mean drunk. One day the horse jumped his fence while he was day drinking. He took his truck out and instead of walking in back, he tied it to the back of his truck and took the scenic route back home.

By the time he got back the horses legs and sides had been skinned to hell and had to be put down afterwards. We stopped relations with him for a long while until he got cancer. I learned this after his funeral.”

“My mom walked in on my uncle “servicing” the best man the night before he married my aunt.

This was the mid 1960s, so being bi or gay wasn’t something many people admitted to.

She said nothing to anyone, only told my dad years later.”

Share your stories with us in the comments! Thanks!