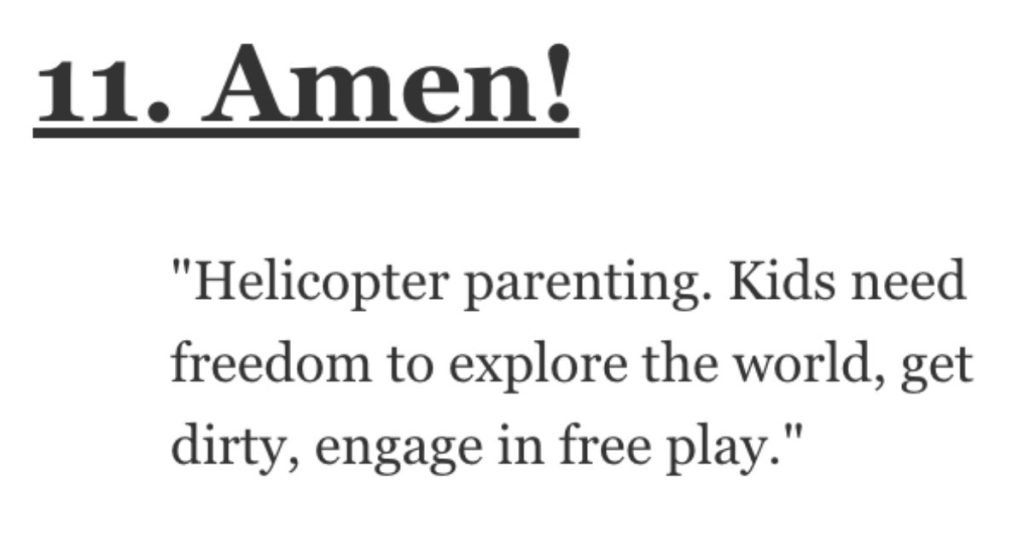 What Parenting Trends Do You Disagree With? Here’s What People Said.

And I see some parenting tactics that make me scratch my head, I’m not gonna lie.

Let’s see the parenting trends that AskReddit users are not too crazy about these days.

Kids need freedom to explore the world, get dirty, engage in free play.

I am not advocating putting the child outside on a Saturday morning and telling them to come home when the street lights come on, but an age acceptable level of freedom.”

“Making your child terrified to fail.

I remember constantly being told if I ever even got a “C” or below— on even something as minor as a pop quiz— I would be “flipping burgers for a living.”

I was so unmotivated to even try by the time high school came, because it had been drilled into me that I was destined to be a loser.”

“Starting a kid in a single sport from an early age and making that their whole life for some reason.”

“Letting you kids run amok everywhere and then being furious when other people are annoyed. I’m an older mom.

I was raised with the idea that you have a social contract with others to not be a pain in the a**. I don’t let my kids go nuts in public. When they are having a hard time, we leave.

I don’t expect them to be angels for hours in adult situations, but being told to not be loud and crazy at the grocery or in line somewhere is not child ab**e. Letting you kids be a hellion that everyone else cringes to see is so unfair to your kids.”

“Talking down to kids and making them feel stupid.

Sure maybe at 5 they aren’t the most intellectual people, but 9/10 year old are smarter then people give them credit for. Don’t talk to then like they are stupid because they are not.

The only thing that does is lower their self esteem and makes them feel small.”

“Making your kids spend time with family even though they get treated bad.

Like in laws who would rather spend time with their other grandkids and not yours.”

“When I was a teenager my parents took away the door to my room.

It’s normal for teenagers to pull away from their parents, I guess this wasn’t acceptable to her and she wanted to keep an eye on me at all times.

I still have severe issues relating back to this one action. This is after years of therapy and no contact.

To anyone considering this as some form of “punishment”, Let me stop you right there. Nothing will get your child to disown you faster than not giving them privacy.”

“Giving the kids whatever they ask for.

Happened to a lot of kids at my school, there all huge a**holes.”

“Allowing kids to constantly mess with pets, even when the pet is giving warnings that they’ll attack soon.

Parents, this is a pretty solid way to start teaching kids about consent from the get go.”

“Letting their children watch loud cartoons on an iPad in a restaurant, annoying everyone else that is just trying to enjoy their meal.”

“Never letting your children assert their own independence or experience things on their own.

Congratulations, you’ve raised an anxious mess of a human being with zero life skills and no ability to cope in the real world.”

12. Lumping them all in together.

“Punishing all their kids for something only one of them did.

I wasn’t allowed to have sleepovers because my brother did a bad bad while he was on a sleepover once.

So because my brother fu**ed up, I have to miss out on a huge part of childhood?”