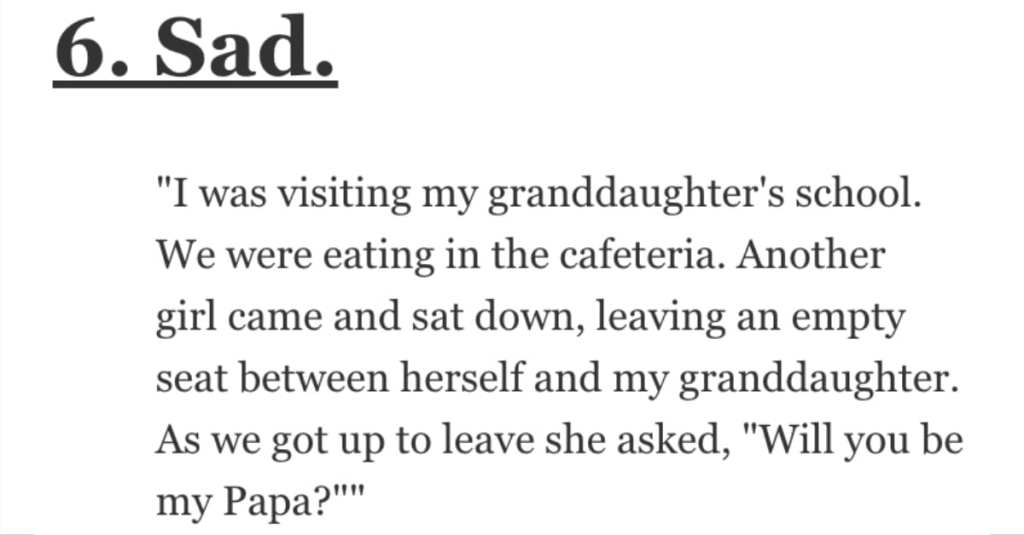 What Question Did Someone Ask You That Secretly Broke Your Heart? People Shared Their Stories.

I guess this question could go either way.

A question could break your heart because you feel for the other person or someone asks you something that’s like a dagger plunging into your heart.

Either way, I think it’s about to get sad up in here.

What question did someone ask you that secretly broke your heart?

Here’s how folks responded on AskReddit.

I was on my way to a party and stopped for beer. The store was fairly empty and as I was in the beer aisle, I see this kid completely by himself.

He was about 5 and at first I thought it was kind of funny because he was trying to pick up a case of beer. I waited like 30-60 seconds, looking around for this kid’s mom/dad to come get him.

A couple people walked right by him like it was normal, so then I started getting worried. I picked up my two cases of beer and walked over and kindly asked him if he lost his mom or needed help.

The kid completely ignored the question and instead was thoroughly impressed that I was strong enough to carry two cases of beer. Eventually an employee noticed and came over as well. I told her everything I knew and she took over and told him that she was going to bring him to find his mom.

As he was walking away he kept looking back at me and I smiled and said goodbye. The kid stopped and said “can I just come home with you? I don’t like my mom.”

I was caught off guard so I just laughed and told him the lady was going to help him. Now I’ll never know the full story, or what happened to him but the more I think about it – that kid more than likely had a pretty s**tty childhood.

I mean, the store wasn’t busy and it was late at night on a weekday. It really makes you wonder why he was there in the first place, how he got separated from his mom and why would he ask to go with a complete stranger instead of worrying about where his mom was?”

“My ex asked me what I liked to do with my family growing up.

Made me realize my family never did anything together and I literally had no answer to such a basic question.”

“I have a stutter and people always ask me why I’m so quiet it hurts because I want to be social but whenever I try I tend to be ignored or cut off half way through my sentence.

I want to be social and speak to people but it’s almost impossible for me.”

“As we passed the toy aisle at the store, “I know you don’t have much money right now, but maybe when you get some we could come back and get a toy?”

I was not doing well financially back then and my daughter brought me to tears in the middle of the store.”

“A few years ago I was at a small family gathering. We had them fairly often. Just me, my siblings, parents and niece’s and nephew.

I remember going out the back for a cigarette and my niece asked “why are you always sad?”. She would’ve been about 6yo at the time.

I was going through a horrendous mental period that involved a lot of alcohol, medication, and sleepless nights.

Of course I told her I was fine, just a little tired from working hard.

I remember thinking about that interaction the rest of the night.”

“I was visiting my granddaughter’s school.

We were eating in the cafeteria. Another girl came and sat down, leaving an empty seat between herself and my granddaughter.

I told her I was sorry and that I couldn’t be. I felt so bad for her. I wanted to give her a hug, but as a man you don’t hug strange children.”

““Why do you sound like that? Is that your real voice?”

Mean girl training me on the phones at work.

And I was so confident on my phone voice.”

“During college, parents took a friend and I out to dinner. Very normal dinner, chit chatted about whatever. After we left and were walking back to my car, he turns to me and says “Is that what a normal relationship is like?”

We talked more after that, I had met his parents a few times and they seemed strict but never seemed to have a terrible relationship. Turned out apparently his dad had cheated on his mom multiple times, dad had zero respect for any of my friends sisters and essentially expected them to do all the housework while the men did “guy stuff.”

Hunting, training for sports, school, etc. Turned out his childhood was pretty f**ked, dad was never around and he had to essentially be the father figure in the house. As the oldest child, never really saw a normal loving relationship that he could look up to.

My friend is a really nice guy, still has some messed up views of relationships though. I never realized how “abnormal” my very normal family/childhood was.”

“When I worked in a juvenile residential drug rehab, a 12 year old asked me why everyone had a problem with her boyfriend.

She had been so mistreated and abused, she legitimately couldn’t comprehend the problem everyone had with their relationship.”

A 10-year-old student of mine whose big sister d**d 4 years ago.

We were working on an activity about dreams and aspirations for their futures.”

“My ex fiancee asked me why I didnt have any friends, or hung out with people or went out to places.

It was because she put herself through crisis after crisis and I feel like I didnt have any choice but to stay and help her but when I had a breakdown and went through my own mental health crisis she broke up with me.

I hope she’s doing better but I honestly never want to talk to her again.”

“When I was 19, I hung out with a cute girl from my high school that I never got to hang with when we were in school.

Had a great day together, and that night she asked, “can we be like secret friends or something? I don’t really hang out with people like you.”

Have you ever had something like this happen to you?