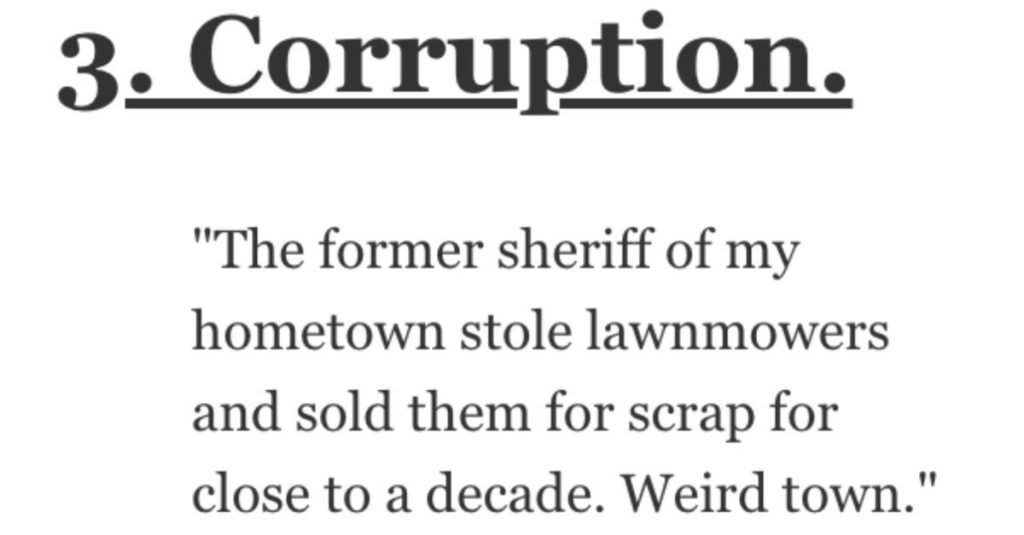 What Was “The Incident” in Your Small Town? People Shared Their Stories.

I lived in a really small town (about 5,000 people) until I was ten-years-old and it really was like something you see in a movie.

Pretty much everyone knew each other and when something major happened, the whole town knew about it in a hurry.

It’s hard to keep secrets in a place like that…

And today we’re going to hear from folks on AskReddit about the big incidents that rocked their small towns.

“We had a super duper senior .. he was mentally slow and maybe 20years old. He was pretty beloved at the school actually.

One day he stole his moms car and drove it through the glass the front doors of the school . Luckily not on a school day, nobody was hurt /arrested or anything but it was widely talked about.”

“A girl was sleeping with a boy in her class and her dad caught them having s**. The guy jumped out the second story window naked .

He fell into the car and the windshield wiper blades caught his balls on the way down and he had to get one testicle removed. I knew this to be true because I knew everyone including the dad, daughter and the guy it happened too.”

“The former sheriff of my hometown stole lawnmowers and sold them for scrap for close to a decade.

“1988, an autistic kid from hs was walking down the sidewalk on the highway that ran through the middle of town.

A couple rednecks that were always bullying him in school saw him, u-turned and sped into the parking lot he was walking past. They ran over to him and kept him from walking away while they taunted him.

He tried pushing through and one of the guys intentionally shoved him off the sidewalk right in front of a semi. K**led him instantly.”

“Our high school principal cheated on her husband with another married staff member and that guy’s wife sent him flowers with a card that said “Happy Valentine’s Day, Adulterer”.

The kids that worked as assistants in the front office saw it and told everyone.”

“A Walmart employee quitting over the store intercom and calling out the store manager for being a pervert, and posting the video of her doing so on social media.

“A 14 year old girl was dating an 18 year old man. The girl’s parents did not approve of the relationship.

The girl hatched out a plan to k**l her parents. The guy was not so bright (maybe learning disability?) so he went along with it. She snuck him in through her window.

He shot the dad d**d, shot the mom who was able to run into another room. She was gurgling blood begging for mercy, and the girl basically ordered the execution/final blow.

Due to some weird law (early 1990s), juries could not pursue life in prison, so had to order death penalty. Dude was executed.

Girl just had to serve in juvie until 18 and was released like nothing happened, despite being the mastermind doing everything but pull the trigger.”

There’s theories but nothing concrete or worth investigating.

His wife and sons still hold out hope that he’s alive. They’re all really nice people and when you talk to them about him, they all just want to know if he’s out there even if he never comes back.”

“High school students weren’t allowed to go off campus to get lunch and had to eat on campus because the school and the police found “the spot.”

Which was a popular spot for high school couple to go to and have s** on lunch breaks. Worst part was it was just behind the gas station by the dump, so unsanitary and unsafe anyway.”

“Our high school band teacher picked a new girl to groom every couple years and gave them all pearl necklaces to wear for their senior photos.

He was married with kids. They arrested him during the school day.”

“A girl from my town disappeared after leaving a bar to never be seen alive again. E

veryone in town knew who did it: a local kid with a bad reputation, but there was no body or any other hard evidence. Years later human bones, scattered by coyotes, were found in a pasture.

Ten years later the kid was convicted of another m**der out of state and got sent back home for m**der. He’s doing double life.”

“A girl from my hometown was texting and driving.

As she was in the Highway, she swerved into the side of the road and k**led a cyclist. This was one of those “known” small town girls (3 sport athlete, famous last name, etc etc. if your from a small town you know what I mean).

Long story short, she basically got off with little repercussions because of her popularity. I know her punishments were losing her phone and license until she was 19, 200 hours community service, and I think she served a day or two in jail on his d**th anniversary.

It literally tore half the town apart. One side was like “she’s so innocent, has a promising future, etc etc” while the other side wanted her in jail for years.

While her punishments were absolutely not severe enough, I know for a fact her social punishments were far worse. People would make a “skrrrt” noise around her in the halls of our high school, people would chant stuff at her while she played sports, and I’d say about half of her friends completely abandoned her.

Overall, a really sh**ty situation for all parties involved.”

What happened that rocked your town?